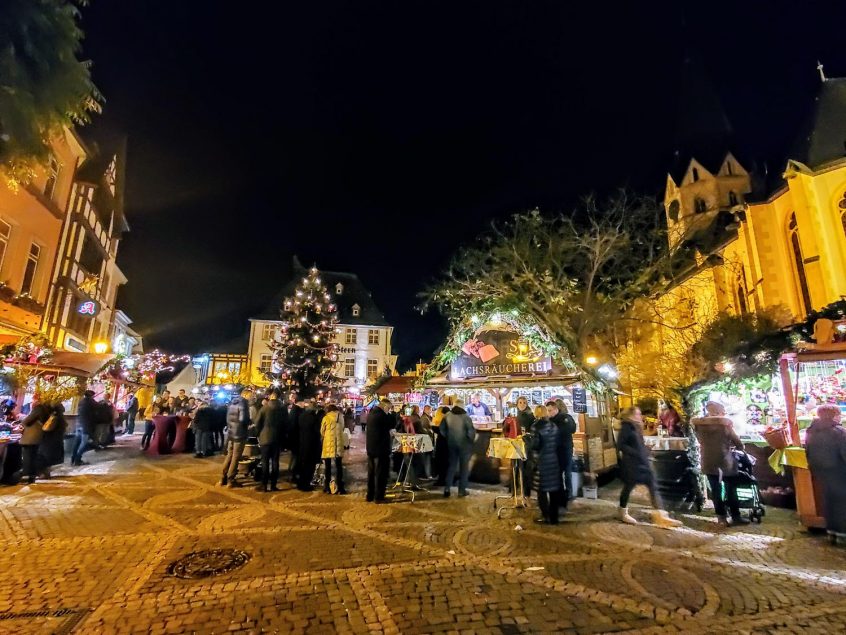 After our brief stop in romantic Monschau, we crossed the North Eifel to Bad Neuenahr-Ahrweiler. There we stayed in the vacation rental of our friend Imgard. Together we enjoyed the Christmas Market and again the next day when our friend Cora came to visit!

The Eifel is a low mountain range with remnants of old settlements. The hills, river valleys, limestone rock formations and small calderas make for some beautiful scenery! The northeastern corner, where we were going, is a red wine district. We crossed the North Eifel from Monschau in the Rur Valley to Ahrweiler in the Ahr Valley and decided to take the rural route! Very pretty, but the winding narrow roads were also tiring haha. Sometimes you were allowed to drive 100 km/h there, which we couldn’t imagine!

Valley of the Ahr

After a lot of those winding roads and passing towns like Schleiden and the city of Bad Münstereifel, we arrived at the Valley of the Ahr. The picturesque valley has several small towns, some with ruins (Altenahr) or other old remnants (the oldest bridge over the Ahr in Rech), all with a lot of vineyards. We visited this area a bunch of times when we still lived in the Netherlands, the most memorable visit was when we took Reginan friends there in 2005. We had named the ruin in Altenahr “Sandy’s Castle” 🙂

Then finally we arrived in Ahrweiler! The full name is Bad Neuenahr-Ahrweiler as this old town centre with fortifications from the 13th century merged with the spa town Bad Neuenahr in 1969. These fortifications are a complete city wall with gates and towers. The old town inside has a lot of old half-timbered houses. Like in Monschau, a beautiful setting for yet another Christmas market. Number five!

An old town like that has a lot of very narrow streets that are now one way traffic. And they recently changed some directions, so we had trouble finding our way in! We almost got stuck with our SUV, but in the end we found our way to Irmgard’s apartments!

She lives in another city, but made sure to be there to spend some time with us. We had supper together at Peperoni and drinks (glühwein, eggnog and beer) at the Christmas market. Nico wanted a beer and had a hard time finding one, outside they only had eggnog and wine. Irmgard wished him luck to find a beer in this Red Wine Metropolis haha! He was able to get one inside a bar though 🙂

In the morning Irmgard spoiled us with a big breakfast! A good start of the day. We had asked our friend Cora from Erkrath if she would be able to come visit us in Ahrweiler. She had been living in Sweden for the past few times we were in the Netherlands or Germany, so we hadn’t seen her in years! Thanks to Irmgard’s instructions, Cora was able to find the house much easier than we did and we spent the afternoon together to catch up. We also walked to the Christmas market again! Last one of this trip, last chance for another glühwein 🙂