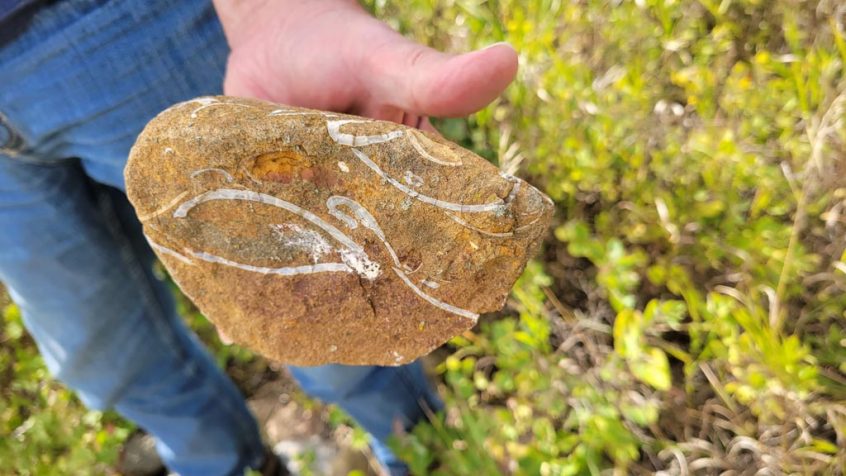 A weekend with friends in Buffalo Pound Provincial Park was meant to be the grand finale of the camping season. This was September 10-13 and we ended up going away one more time after this. We love fall camping if we get nice days, and these last few weeks have been even nicer than usual. This park is already one of our favourites: close by, beautiful scenery and now in the fall, beautiful colours. It’s also a great time to roam around on the surrounding hills a bit (no ticks haha) and look for fossils from an era when all of this was part of a big inland sea.

We went to Trails End to join our friends Gord and Lorraine, and George and Laureen. We picked site #26, next to Gord and Lorraine’s spot. It was in the middle part of the campground that has a good mix of low vegetation and open areas. So it was providing protection and some shade, but you still get to see the hills around you. Besides hanging out in each other’s campsites and listening to nearby coyotes in the evening, we walked up the hill to find some fossils. I also picked a bowl of chokecherries for jam.

Back to the Keg for Saturday night

Oh and we had an unusual outing on Saturday night! We already had an dinner appointment in Regina to join the Klassen family at the Keg. They came all the way from Assiniboia to celebrate their wedding anniversary there and we were invited months ago. Only the pic with Debbie and Jessica turned out alright. The one with Hank, Katie and Wyatt and Nico was too blurry, sorry. Anyway, we had asked Gord if we could borrow their vehicle to drive to Regina and back, instead of having to break up camp and drive with our motorhome. Thanks Gord! On our way back we saw a mama deer with a little one (not in the pics).

Fossils from the Cretaceous era

Gord knows quite a bit about the history of the area. He has more than once shown us the layer in the hills where you can find fossils, mainly shells. I believe they are brachiopod shells in limestone. This part of Saskatchewan was once, millions of years ago, part of a big inland sea. What was once the bottom of that sea, is now one of the layers in the soil from previous glaciations. They became exposed around 14,000 years ago. The last glacier stalled at what is now the Qu’Appelle valley. Its meltwater, running from west to east, cut deep into those layers to create a valley around 180 m deep and 2 km across.

This weekend was exactly 12 years after our first camping trip at Buffalo Pound in 2009, when we met Gord and Lorraine for the first time!!