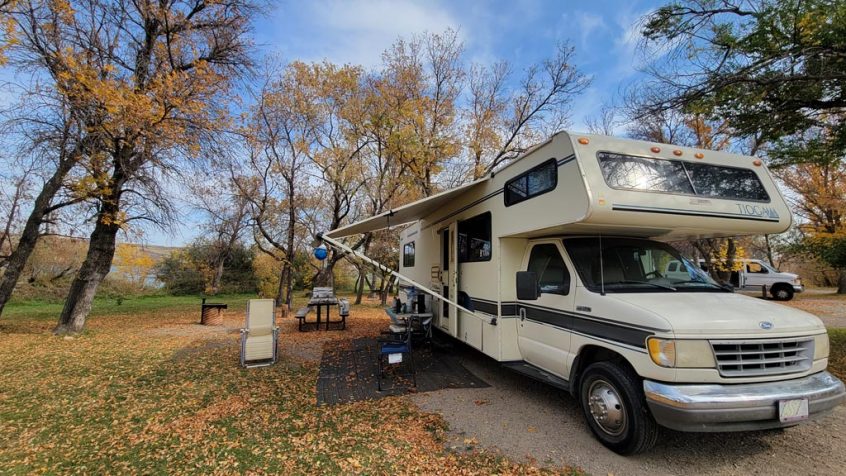 Wasn’t the last fall camping trip supposed to be the last one this camping season? Ha. Well, the unbelievable temperatures of September changed our minds! Actually I’m writing this in October and a few days ago it was 28°C, how crazy is that?! We convinced Gord to come out with us one more time this fall and we ended up in Lakeside in Buffalo Pound Provincial Park. Lorraine was done for the season, so it was just the three of us. This was our first stay in that campground! We were there September 27-October 1. It gave us a chance to spend some time in the central part of the park that we usually don’t visit when we stay in the campgrounds in the western part. And with Gord I also checked out some of the eastern part, including a dried up marsh at Nicolle Flats and dozens of bisons!!

Gord wanted to go to Elmview, but the booking system and the lady at the office said all those sites are way too small for our motorhome. She gave us a list of available sites in Lakeside instead. We went to check out both campgrounds, and while we are certain we would fit in a handful of Elmview sites, we chose Lakeview #4 instead. I just cannot pass up a lakeview site! We have fished there before, but never actually stayed in this cosy, small campground of 7 electric sites.

Drive to the eastern part of the park

Early on Tuesday night, the wind suddenly picked up and did not die down until about 24 hours later. I asked Gord if we could drive to the bison range, the Spirit Walk Commemorative Monument and Nicolle Flats on Wednesday. Nico wanted to hang out in our site, so Gord and I went east on the grid road along the lake. He showed me the Rankins campground, the Lower Chalet campground where a ski area used to be and when we drove up the hill of the monument, we saw the bison herd!

Before the settlers came to this continent, there were millions of bison roaming the plains. That must’ve been some sight! Bison were hunted almost to extinction in the 19th century. Thanks to conservation efforts, esp. in Elk Island National Park (Alberta), we have plains bison again in Canada. Buffalo Pound received 12 bison from that park in 1972. I don’t know how big “our” herd typically is, but I count around 45 on one of the pictures alone! This may be a captive herd, but they have a very big paddock to roam the hills in.

This monument, placed in 2018, honours the indigenous peoples on the plains. I wasn’t able to find much info on it otherwise, on site nor online. I know it replaced the viewing tower that used to be on this hill, you can see a few pics of it in this old post. But where had the big eagle gone that used to be on top of the centrepiece? Looks like the monument was vandalized?!

After that we parked at the Nicolle Flats Nature Area. We didn’t walk all the way to the Nicolle Homestead, but we did go on the boardwalk into the marsh. Unfortunately with this year’s drought, it was all dried up! The boardwalk is normally floating on the water, but now it was hanging crooked on the bottom and some of the railings that rested on the guide poles were all bend. The water in the marsh is controlled by the dam, and the level in the lake didn’t seem all that low, so we weren’t sure why it was still so dry.

After the wind died down, it was a gorgeous evening again with a colourful sunset. Like the other nights, we enjoyed a fire in our site, the call of the grebes on the water and a choir of coyotes in the hills! Fall camping is amazing! We also saw the NASA Space Station come over. You can look up the times it will be visible at your location on spotthestation.com, how neat is that!

On Thursday I went for a little walk in the area: I followed the shore line to the beach, pool and boat launch, then I went up into the Valley campground and from there over the hill to Elmview and back to Lakeside. On the hill I had some spectacular views over the lake and the hills! Another plus about fall camping is obviously enjoying the fall colours of the trees, so gorgeous. Near the boat launch, I checked out Squirrely Putt & Play, (now closed since Labour Day). In the season they offer mini golf, axe throwing and rent out kayaks, paddle boards, canoes and mountain bikes!

Nico did some fishing and caught a big pike! It was 23″ / 60 cm. He sent it swimming again though. In the evening we had our last fire of the season. I realized I just may have experienced the four most relaxing days of this season?! It actually was AS nice as last year’s fantastic fall camping trip to Kenosee! I was finally able to shut off my ever creative brain and just chill, hang out, chat and relax. Sigh…