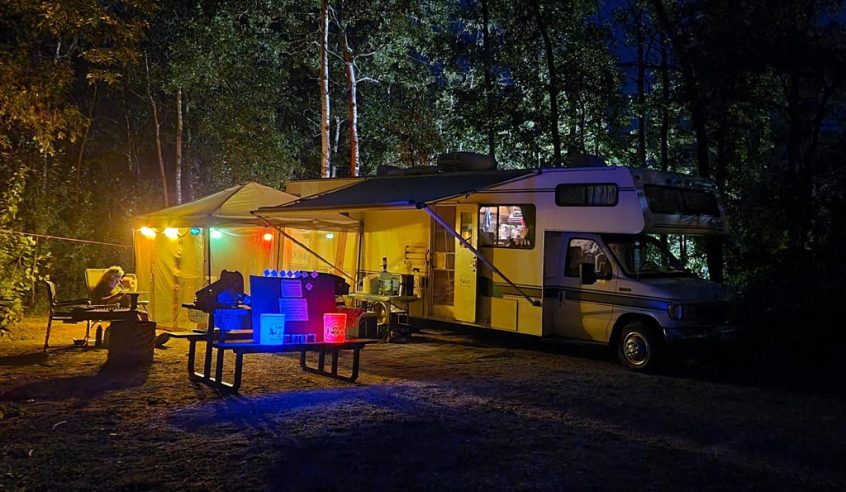 For months we looked forward to going back to Moose Mountain again for our longer summer stay! Biking, fishing, walking, enjoying the trees, the lake and the campground, fishing at Little Kenosee Lake. Although we had a great stay in our, so far, favourite site Fishcreek 34, we also were a little restricted by the weather. Hot, humid and smoky days and then a few rainy, stormy days at the end.

I didn’t add a post for last year’s vacation yet, but we’ve been to Moose Mountain a bunch of times. The first time was in 2009, but in recent years it’s become a favourite for its relatively wild scenery in the middle of the southern prairie, closer by than parks in the boreal forest “up north”. Moose Mountain is an elevated area with forests and lakes. It’s easy to find that green blob in the southeast on a map of Saskatchewan! And it’s also a favourite now for the really cool shore-fishing dock close to the campground, we wish all parks had this!! Several years ago, the level of Kenosee Lake was brought up to improve swimming, boating and fishing experiences and that’s when they put in these docks. In the old pics, you’ll see way more land and reeds were water once was, and now again IS! The level was a bit lower this time, as in all lakes in this current drought in western Canada 🙁

Since last year, we take highway 48 down to the park. It’s a beautiful drive through rolling hills and quaint small towns. Just about half way, you’ll find Montmartre. It is known for its 30m Eiffel Tower replica, but now to us also known for Pit Stop 48! Thanks to recommendations in the Saskatchewan RV Campers group on Facebook, we have added this great little snack shop to our trip for a snack or a meal. Oh and a soft ice cream! I get the small ones and they are still huge haha.

When we got to the more eastern part of the route, we noticed the smoke from wildfires in western Canada and the States was more dense there. I think it also made the already hot air more humid. When we got to the campsite, I sent Nico fishing and spent a few hours leisurely setting up the site. Our friend Gwen (who has a seasonal there) popped by to bring some wood, so sweet! Yes that’s right… Moose Mountain is one of the few parks that lifted the fire ban.

Lazy days in the heat

The temps of around 34°C and the smoke were more troubling than we realized at first. We were sweating like crazy, but the smoke also made us feel a bit unwell when we tried to do something, like bike to the store by the beach. Our appetite on these days was really low and we also hardly ever wanted to make a fire as it was so hot! We definitely didn’t do as much as we had planned.

So we had a fairly lazy stay along with some of those bald faced hornets that kept visiting us. Thankfully these aggressive big, black and white wasps seemed more interested in the screen tent than us. I have no idea why! We didn’t keep food there or anything. I made a wasp trap from a pop bottle, but couldn’t get anything that we had available to work as bait. Last year we only saw one of these around, now there were definitely more. Their sting is apparently really bad, but thankfully nothing happened.

The tent is a trial, by the way. I find screen tents too much “indoors”, but we borrowed these screen panels from Randi to try out with our canopy. It did protect us from the wasps and gave me a sort of private room for crafting or computer stuff, but we didn’t use it a lot.

The next day it was game day! The first Rider game since Covid, so that was exciting. During the day I tried to walk the old washed out Lakeview Trail behind our sites. The lake levels were so low and there weren’t any closure signs anymore. But at some point it got so hard to continue, that I followed a little path to a campsite to exit it. I wasn’t even half way. In the evening we streamed the football game on the laptop.

The next day we walked around and entered that old Lakeview Trail from the other end. After a short distance and some steps, we ended up on a little beach. The rest of the trail seemed as impassable as from where I tried the day before. After years of being flooded, it had clearly not been used again much this year. We also saw some unknown green berries (what ARE they??) and walked to the sites further along the shore of Little Kenosee Lake. One was unoccupied, so we checked the path to the lake, but it was too steep for us to go down to the water.

Finally some rain in Moose Mountain

After one week, there was finally one day that was still hot, but not as smoky and humid! After that we had a few rainy days, which was a nice break at first. Time to watch some sitcoms inside or nap. The temperature dropped around 15 degrees, but it also got quite windy. We kind of considered going home, but the last full day was supposed to be a nice sunny day again. When that day came, it turned out to be quite stormy still. Once we started to break down part of our set up for the next day, we decided to just keep going and leave later that day instead of the next morning. Sometimes we love being away for weeks, sometimes a week is enough and we are good to go home again. That’s fine too!

One exciting thing on our way out: we saw a moose in Moose Mountain for the first time! The picture is quite crappy unfortunately, but it was very clear for our own eyes 🙂 We also stopped at the Pit Stop 48 again for a burger and fries, so we didn’t have to make supper when we got home. A nice smoke-free ending of our trip! I’m writing this a few days later and the wildfire smoke is back. But we count our lucky stars that we are not close to any fires! We’re thinking of all the friends in BC and in general of everyone who is fighting them or affected by them 🙁