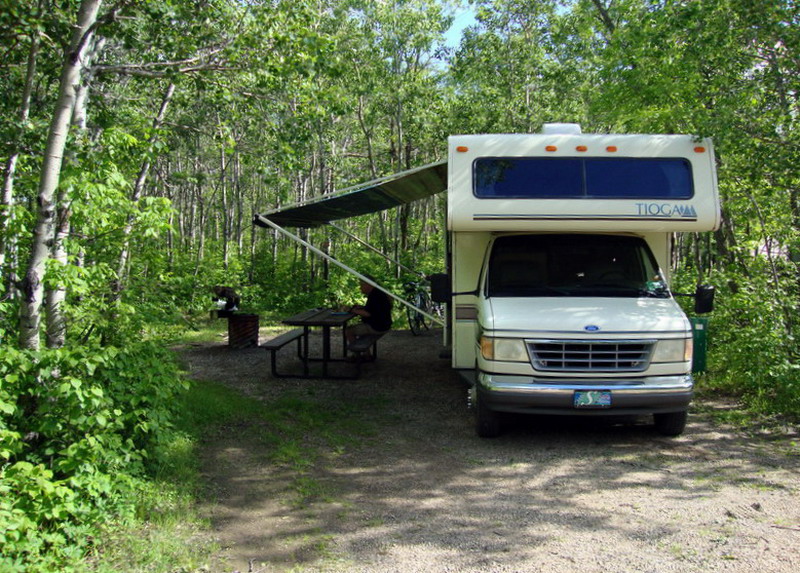 Last week Thursday night we left after Nico got home from work. As it would be dark soon, we couldn’t drive all the way to Moose Mountain Provincial Park (Kenosee Lake), our destiny of choice this time, so we spent the night at Dyer Straits, a campground near White City. It was a simple campground, small sites and hardly any privacy, and right at the Trans Canadian Highway, but at least we were away from the city and camping. Unfortunately it rained a bit, so we sat inside. In the middle of the night we woke up from the sudden howling and barking of a bunch of coyotes close by. Exciting (hey we’re city slickers…)! In the morning it was windy but sunny and after having some sandwiches outside, we continued our travel east. 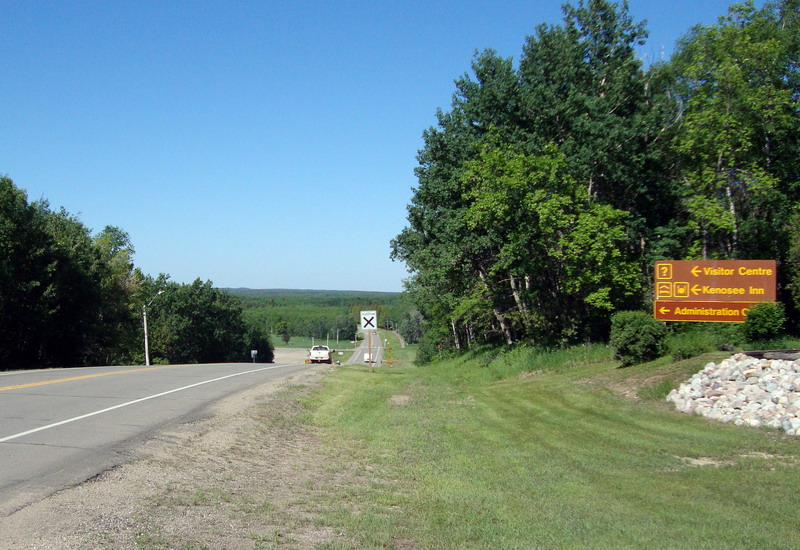 The scenery on the Trans Canadian Highway (the 1) had no surprises, the usual slightly rolling hills, farmland and dugouts. We had to turn south in Whitewood, where we took a lunchbreak at the gas station. Around 2pm we arrived at Moose Mountain. It’s a gorgeous forested area with lots of lakes, a very untypical prairie landscape. But since it’s on an elevated plateau (900m above sealevel) it is cooler and gets more precipitation than the surrounding prairie, hence making forest possible. We stopped at the park store for some groceries (very complete store with groceries, camping stuff and some souvenirs) and ended up at a beautiful spot on Fish Creek Campground (in the forest and very level). As I settled in and stayed with the cats who enjoyed themselves outside, Nico went for a little bike ride along Kenosee Lake south of the campground. At supper time, Nico’s attempts to get a fire going unfortunately failed, the wood would only smoke a lot. Bummed out about that, we didn’t feel like getting the BBQ going either, threw some burgers in a skillet on the stove and had excellent burger sandwiches and salad instead. Later on we walked around on the campground and noticed that they mixed all sorts of sites in the lanes, both in size and shape (most you have to back in, some are more like a bay). I can be brief about the sizes and shapes of the RVs though: huge! Most of them are ginormous fifth wheels or trailers with slide-outs that made our motorhome look small and there were just a few smaller units. At sunset we walked the Lakeview trail to see the sun set over Little Kenosee Lake (NW of the campground). But we couldn’t even get that right, the sun was already gone. Still a nice view though! 😉 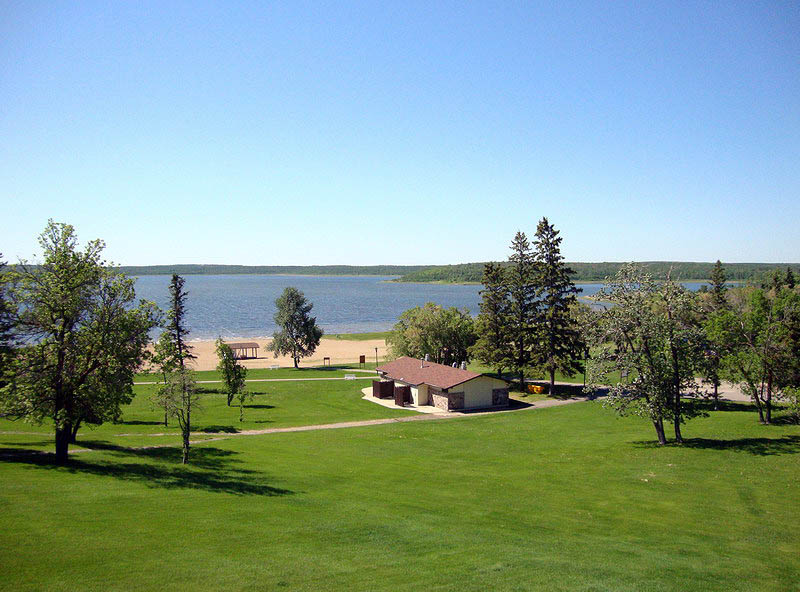 After an early night (and good night’s sleep) we woke up fairly early and by 8.30am we were on our bikes riding around in the park. It was going to be a hot day, but this early it was still really nice!! We tried the White Deer Trail into the forest, but that was covered with mulch (wood and bark chips) which made it really hard to bike on and soon it was so muddy we couldn’t continue. We turned around and went back to the main road and to the beach. Gorgeous! At the Kenosee Inn “above” the beach we had a fantastic breakfast (yummy buffet!) with a stunning view over the lake and good music (Led Zeppelin, Rush etc) in the background. Wow!

For hours we just relaxed at our campsite until we went for another bike ride at 4. We wanted to see what the road further west would be like, but after a short while it turned into a dirt road and only seemed to be the entrance to a network of trails for off-the-road vehicles in the summer or snowmobiles and cross country skiing in the winter. We went to Little Kenosee Lake by the stables and Kenosee Lake close to the campground, then we returned to our site to BBQ and relax again (much needed after the bike ride in the rolling hills!!!).

Sunday morning we couldn’t stop thinking about that breakfast buffet at the Kenosee Inn, so we biked there again! It was windy, but still warm and partly sunny. Perfect ending of this camping trip (we’ll conveniently forget about returning to Regina in rain) 😉

Private campground near White City, grassy with few bushes and trees, right by the Highway 1, surrounded by farmland. Small sites with picnic table and firepit, toiletbuilding ok but could use some tlc, $18 for electric/water site. Playground, wifi.

Beautiful campgrounds in the forest, perfect level sites with firepit/bbq and picnic tables, situated between Kenosee and Little Kenosee Lakes. Our electric site was $22, day/3 days/weekly/transferable annual Provincial Parks pass needed ($50 for 2009). It’s a few kms back to the beach, Kenosee Inn, mini-golf, and the golf-course and more amenities in the village of Kenosee Lake.