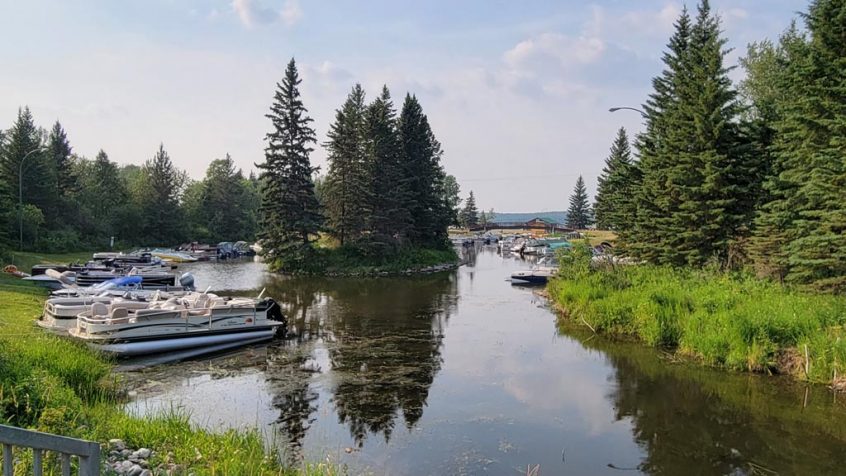 Our first trip after we moved to Canada in 2008, about three weeks in, was to Greenwater Lake. We had just bought our first car here and were still quite oblivious of the dangers of prairie winters! But it was a beautiful trip that we’ll never forget. We have been back for summer camping several times, but the last time was actually already nine years ago!! Time for a revisit!!

We combined this camping trip with the yearly Dutch BBQ. Last year we were invited for the first time by the Rispens family and this year the Derks family near Melville organized it. Most of these people are farmers and live all over Saskatchewan. We might be the only city folks in the group haha. Last year we felt right at ease with everyone and we were thrilled to go again this year. Some faces we remembered, some were new, but that didn’t matter. Femmy, Louis and their wonderful family did a great job and we were grateful we could park there for the night! I woke up for a bathroom break around 5am – saw the sun rise and a deer walk by!

The drive to Greenwater Lake

Late in the morning we drove to Greenwater Lake Provincial Park. In Foam Lake we decided to take a coffee break, but there wasn’t much open on a Sunday – the Chinese restaurant, Dennis’s Cafe, was though! Well, I didn’t have to twist Nico’s arm to get some Chinese! If anything, he had to twist mine as I didn’t really want lunch yet. But it was the only option and I figured I could always order some small dish. We ended up with a menu for two and it was delicious.

After chatting with another patron, we continued our way to Greenwater. He had advised us to stop at Fishing Lake, but although it looked great there, we just wanted to get to the campsite. After Kelvington there was some road construction, but most of it was done and the last 8km of rougher road didn’t delay us much. It’s always exciting to get that view of the lake straight ahead, then you know you’re almost at the turnoff 🙂

Storms were brewing and we were under severe thunderstorm warnings, so we didn’t set up much once we got to the campsite (Hilltop #24). It was a site for maximum 25′ equipment, but as per usual, our 30-31′ fit royally! We still had plenty of space on both ends of the motorhome. The pad wasn’t wide though. We don’t have slides, but if you do, you may not be able to put your awning out as well! The fire pit is in a separate area, big enough for all our needs and wants (cat tethers, canopy, picnic table, chairs), very private to the street and semi-private to a few neighbouring sites from the next row.

We set up the rest of our stuff the next day and explored the park a bit on bike. The next day, Nico went fishing in the marina, caught a pike, but sent it swimming again. In the evening we finally got to try out our propane fire pit after three years or so! There was a fire ban in all provincial parks and this propane pit is a nice alternative!

We rented a freaking pontoon boat!

On Wednesday, we rented a boat in the marina. The plan was to get a fishing boat, a bit better than what we used to rent at Duck Mountain, but I HAD to try out that small pontoon boat as I love these boats so much. I had never been on one, they had a fairly small one for rent, and I was sold haha. It drove up the price obviously, but it was awesome to drive and to lounge on. Nico did some fishing, but unfortunately the fish apparently had the day off! Still an awesome afternoon, finished off by a meal and a soft ice cream at the Beach Cafe 🙂

After one more lazy day, it was time to head home again. There was a lot of wildfire smoke by then, spread out all over the province, from fires in SK, BC, MB and Montana. Wow. In the meantime we learned there had been severe flooding in the Netherlands, Belgium and Germany. We saw dreadful footage like raging rivers through old town streets in many of our favourite towns around our old home area. Valkenburg (NL), Verviers (B) and worst of all our beloved Ahrweiler (D) and the Ahr Valley!!! Our friend Irmgard was OK, but the water even reached her house there! There were a lot of casualties in the region, heartbreaking.