In the early afternoon we went to Saskatoon, because there was an extra gig for Dirtbred (also from Regina) and Into Eternity (support: Sparky from Saskatoon)! YAY! We stopped at a music store in town, where I taped a short video of Tim shredding on a banjo hehe! 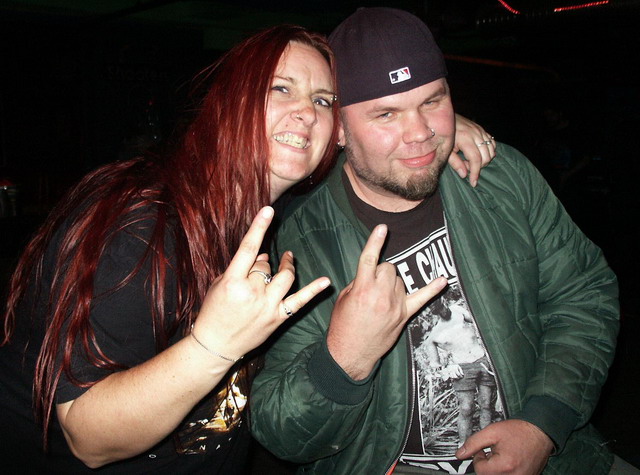 At the club we had something to eat and waited for Dirtbred to arrive, since they would bring the kit. Brent and Jen came out, I had asked them to 🙂 I think Sparky started at around 10pm and put on a good set. A bit more hardcore than what I like, but good and it also had some different moments (more quiet, clean vocals and a bit jazzy even at times). Dirtbred was one of the Regina bands I really wanted to see, they were great! Very energetic band, playing mostly fast grind/death metal, with hardcore influences and some other elements. I loved to finally see Donnie on stage and he was so sweet to mention us during the gig. “We have some people here who came all the way across the planet from Deutschland, Germany…” and then Troy tried to correct it “Erm, actually, it’s Holland!!” hahaha! Donnie was so ashamed afterwards hehe, he won’t forget in his life where we’re from 😉 By the time Into Eternity played, the volume of the music had been turned up a few times, it was way too distorted. But it was fun anyway, and cool to see Dean and Adam on a stage. Dean’s still growing into the lead singer role (he plays guitar as well in his own band) but it all worked out well. No two singers are the same, but Dean’s voice fits the others perfectly. Roque of Dirtbred joined them for the final song Sell God, that was cool. Different (he has a higher voice) but cool 🙂 I think there were 60 or so people in front of the stage, but they screamed for one more song as if they were 200 🙂 So we got Spiraling Into Depression as well 🙂 After the gig we sat with Brent and Jen a bit, we met Dave (Danny’s brother) and a few guys that recognized me from Saskmetal came up and introduced themselves, cool! We drove back in the middle of the night and got home at 4.30 or so…. zzzzzZzzzZZzzzZZZZ!!!!

I didn’t drink a lot, but maybe those two Sambuca’s I had after a few beers were too much.. for I woke up with a migraine!!!:( Mark (from the Into Eternity yahoo group) called and we went out for lunch with him. After that I had to lie down for the afternoon, I was too sick. We stayed in the rest of the day, later on Danny, Roque and Mark came over and we played the Metal Mental Meltdown Trivia Board Game. It was fun for a while, but most questions were so difficult or obscure that we didn’t know most of them and that killed it a bit. Kristie had joined us by then and we all watched some TV after that (we have to get some Trailer Park Boys DVDs!), and that was it.