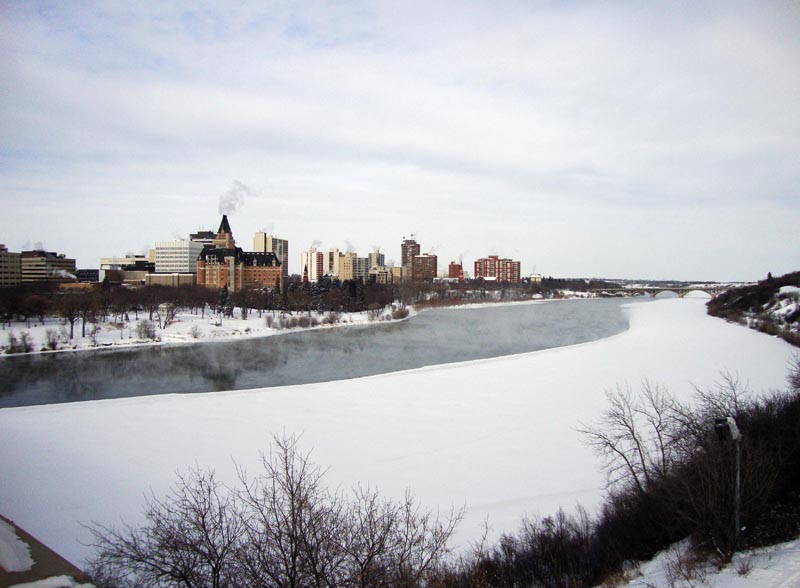 Last weekend we spent 3 days in the City of Bridges, Saskatoon. We had been there before, but never really stayed long or explored much of its downtown. Although the city is just slightly bigger than Regina, it has much more shops and entertainment concentrated in the downtown area (unlike Regina). It also has the South Saskatchewan River with several beautiful bridges and a well groomed network of trails along the river banks (Meewasin Valley), which looks more majestic than our (also gorgeous) Wascana Centre (lake and parks). All in all, where Regina has more of a town feel (which we love, don’t get me wrong), Saskatoon is a real city. So when we got tickets to see Heart on February 18th, we also booked 3 nights at the Park Town Hotel near the University bridge to finally check out Saskatoon’s downtown and trails for our only winter getaway this winter! And, the 18th was also our 3rd anniversary living in Canada!! 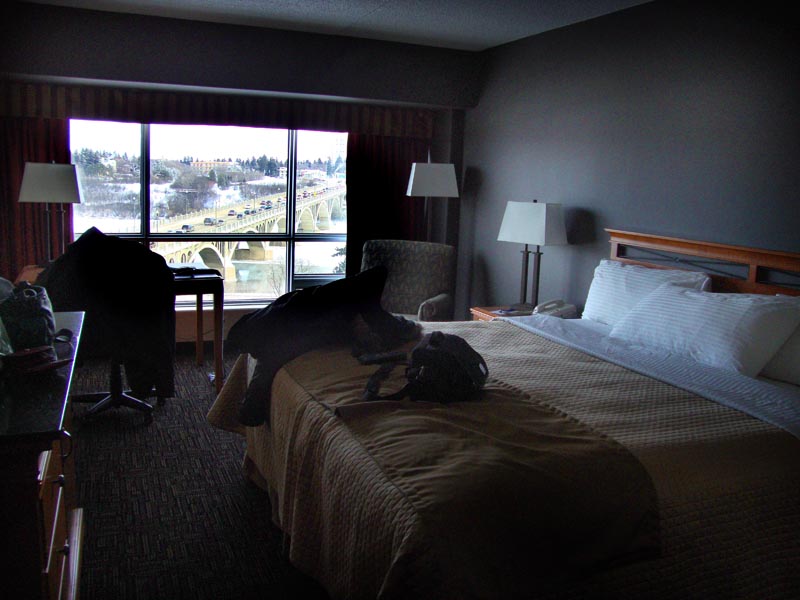 Despite snow earlier in the week, the roads were clear and we got to Saskatoon safe and sound around 2pm. We first checked out the Broadway Ave on the east side of the river, known for its alternative little shops and atmosphere. After a late lunch at the Broadway Cafe we drove to the Park Town Hotel to check in. We had booked a king executive room with river view, since they were only 10 bucks more than the regular ones (we payed a very decent $139 a night, CAA rates). Wow that was the best decision! The view is stunning, whereas the so called “city view” of the rooms on the other side of the hallway turned out to be a view on the high-rises surrounding the hotel on that side!! The rest of the room was also very nice, a comfy king size bed, nice and clean bathroom, big tv, desk with river view 😉 and a comfy chair.

Since we didn’t get hungry anymore, we chilled in the room for a bit before we took a cab to the downtown TCU Place (we could’ve walked 15 or 20 mins but decided against it in the cold for that one night). My all time favourite band Heart (Ann & Nancy Wilson, hits like Magic Man, Crazy On You, Barracuda, Alone etc) was playing so I was VERY excited to see them again! I had seen them once in 1990, but in a huge arena (Ahoy, Rotterdam) where I was miles away from the stage and the performance was too routinely. This time around I knew it wouldn’t be. Ann is 60 and I’m sure she’s only on stage to have fun by now. Plus their newer stuff is much better than the 80’s pop stuff and this show was also in a beautiful, relatively cosy, theatre.

Earlier that day we saw news articles that Heart’s buses were stuck in Manitoba overnight because the 1 had been closed because of a blizzard. Would they be on time???? When we got to the theatre we saw a lot of buses, so that looked good 🙂 And they even started on time, at 8 the support act Carmen Townsend came on stage. Great pipes, but weird vocal lines – I guess miss Townsend is an acquired taste we didn’t acquire just yet. Then at 9pm it was time for my beloved HEART!!! It was amazing to hear and see them again, really see them this time (I also brought binoculars). The whole show (110 mins!!) was phenomenal and I couldn’t believe my hero of 35 years (my only hero in life besides my dad!) was right there in front of me, singing as incredible as always, if not better – and looking great too! It was an emotional gig for me and when she sang Alone (not even my favourite song, but Ann of course excels here) I had to really cry. Just. WOW. No “Love Alive” or “Mistral Wind” for me (you can’t have it all when they recorded so much since 1976), but I did love the setlist: 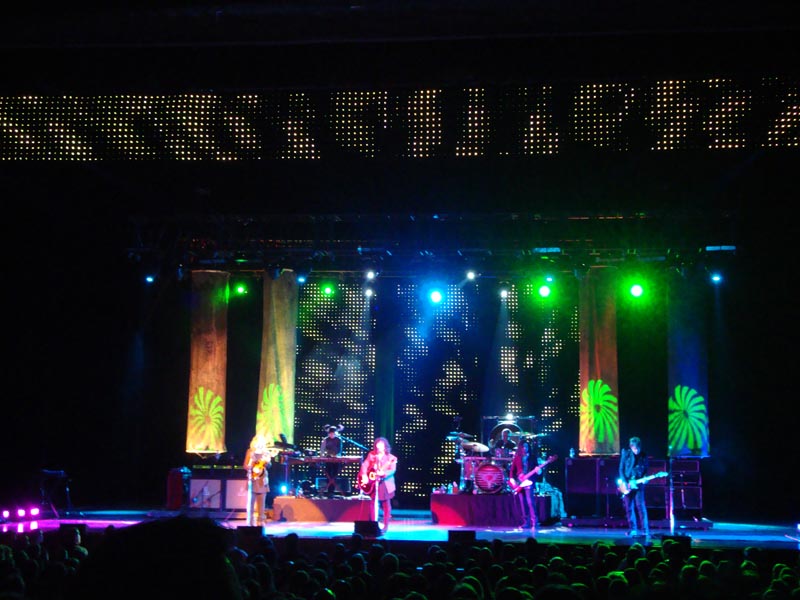 (click HERE to see 2 more short clips of “Dog & Butterfly” and “Crazy On You” on our YouTube page!)

After that I wanted to drown my emotions in a big pint of Rickards Red at the Irish Pub at the hotel. We also wanted to get some food by then, but their kitchen was already closed and they had nothing but popcorn to offer… no thanks! We left after the one beer to order pizza from our hotel room. 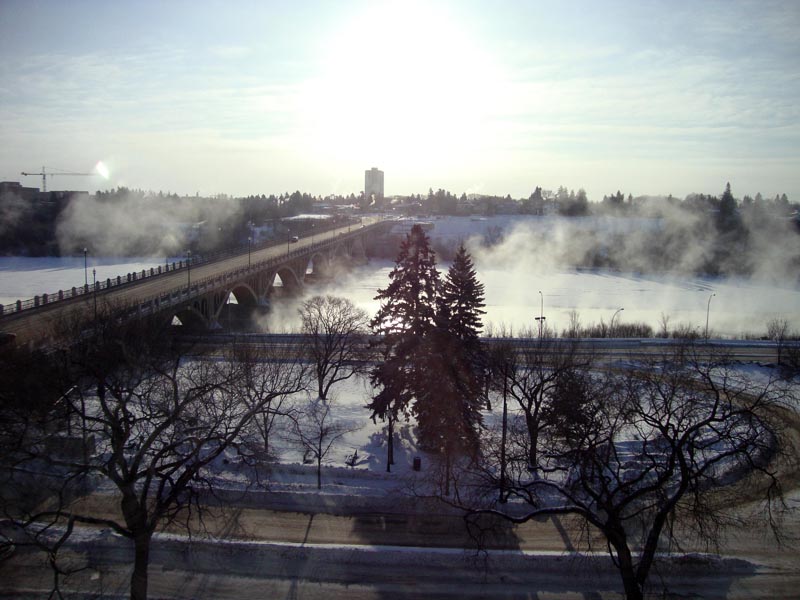 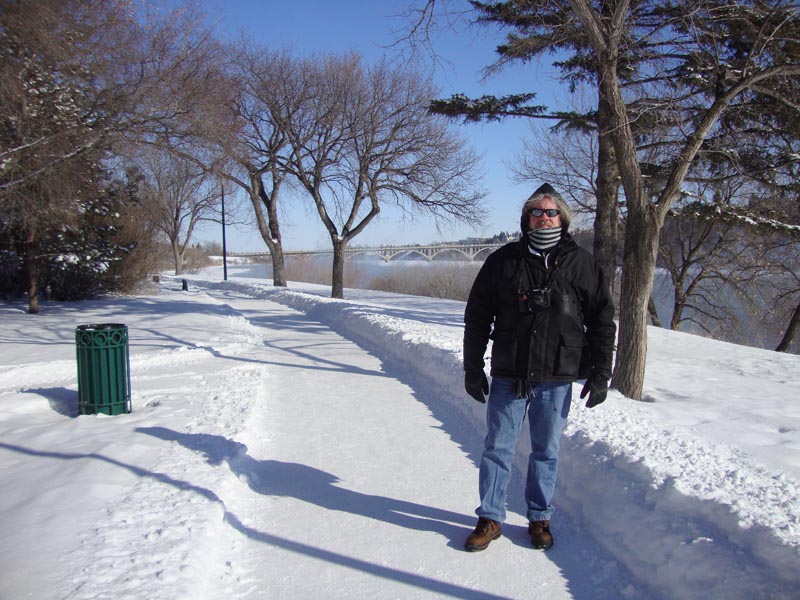 After a fabulous breakfast at the Four Seasons restaurant of the hotel, it was time to check out downtown. We walked south along the river trails in Kiwanis Memorial Park until we got to the Meewasin Valley Centre past the Broadway bridge. Very nice displays and a lot of info on Saskatoon’s history. We then went to the shops in the downtown streets as well as the Midtown Mall. We saw a few exhibitors from the Taboo Show (which was also at the TCU Place) walk around and ended up talking to one guy. Very nice and he gave us free tickets ($15 value each!). But we didn’t really plan to go and the next morning I gave them to hotel staff in case they’d get someone at their desk who’s interested in going. 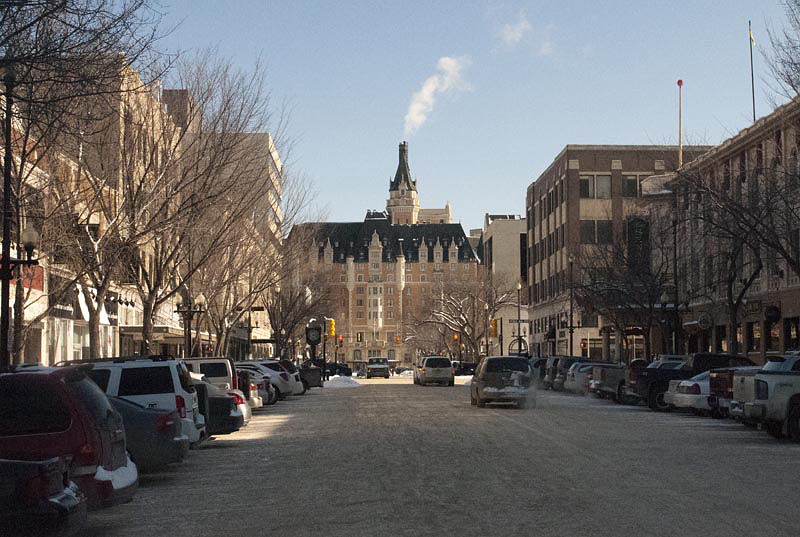 After some shopping (got sandals on sale at the Ecco store, yay!) we ended up at The Real Greek for supper. This was exactly the type of restaurant I’ve been missing here in Canada! A real Greek restaurant with the blue and white picturesque, cosy decor! We do have a Greek restaurant in Regina with good food, but they are snobs IMHO, trying to be high-end and the decor too… no atmosphere (big rooms, not cosy, salmon pillars kind of decor), so we don’t like going there. This one was not cheap either, but we loved it!

After the big Sunday Brunch at the hotel restaurant, we checked out tourist info to see where we could hike today. We ended up just crossing the University bridge and going north on that side for a bit. Along the way we decided to continue to the next bridge, the CPR Railway bridge, and to cross there again and come back on the west side, on Spadina. It was -20°C, but in the sun and without the wind, not even my cheeks got frozen! I can’t believe we walked 4.5 kms in that cold, it was great!

After some warming up we took the car to visit the Uptons in their new home in Hampton Village. Well, Brent, Jennifer and their kids Ella and Arden have already been living there for 3 years, but we hadn’t seen them since 2006 😉 Great times, great meal (thanks!), great company!

Even long weekends end at some point… we drove home with a lot of blowing snow on the roads, but it was ok. We can look back at a fantastic weekend in the City of Bridges! 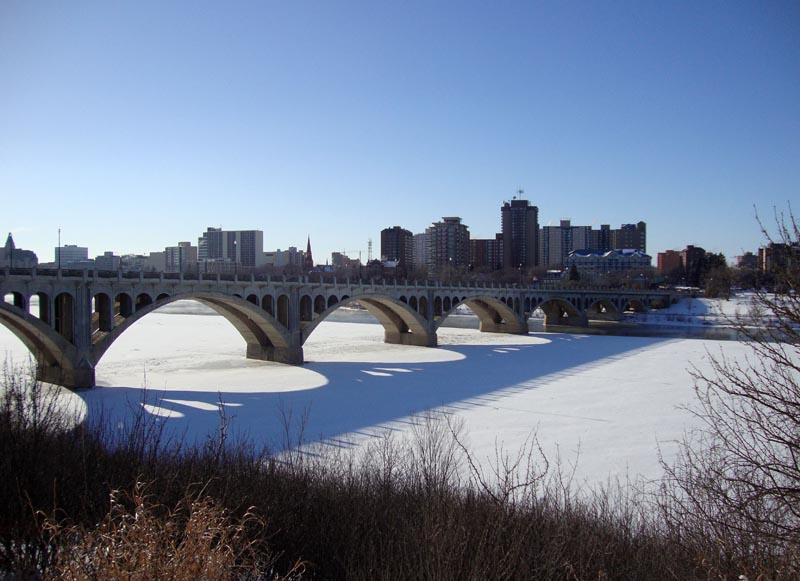