Time for an update! The biggest news we’ve had lately is that Robin turns out to have diabetes (we went for shots and a checkup, so found it out before much damage was done), and that we’re looking forward to going to Canada again in October (likely). You can read a bit more in the Xmas mail below!

Our Xmas was fine, Nico was working but we had some nice dinners and brunches together and he had a few days off after Xmas. I didn’t do nearly enough in the few days left of my vacation (always plan way too much) and on New Year’s Eve Cora came over. We watched Spinal Tap and School Of Rock (great fun!) and went outside at midnight to wish neighbours the best and to watch all the fireworks together. Happy New Year! 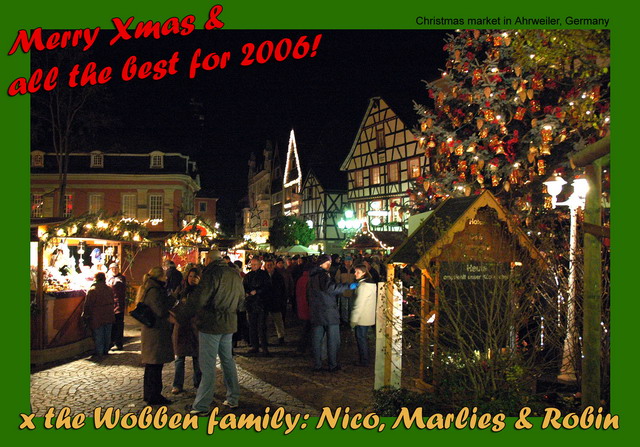 The past year has flown by so fast, can’t believe it’s almost over! We’ve been busy with our usual things. In my case mostly with all my sites, esp the webzine (Morrigan’s Pit) takes up a lot of my time (and still I don’t get everything done as some of you know, sorry for that! 😉 ).
Nico finally got a digital SLR (Nikon D70s) for his photography, he did some courses for work, he’s a neuro-nurse now and doing another course for the stroke/brain care unit as well. Hopefully that comes in handy in case we move to Canada.

Ah, the emigration plans.. they didn’t die? Nope! We put them on ice for a bit, because we wanted to go back for another vacation (Rocky Mountains, Alberta) and orientation (Regina, Saskatchewan) trip first, and that we plan to do next year in October. So Regina folks, we’ll be back! We’ve never stopped talking about it, but esp. after this year’s vacation to Crete (which was lovely and relaxing by the way), we’re slowly focusing on Canada and the thought of living there again! Hopefully we (read: Nico – I’m already there hehe) can take the decision to take the plunge after our next visit and start up the emigration procedures. Since that takes a lot of time (months to get the paperwork and about a year before you even hear if you get the visa) – don’t worry, we won’t be out of your hair (or into your hair if you’re in Regina!) for a few more years!

One other little change in our daily lives is that our cat Robin of 14 years, the last of our tribe, has become a sugar cat! That means that twice a day on regular times (12h apart) he gets a small meal of diet food and an insulin shot! The diet is the biggest problem, poor kitty! But it can’t be helped, we can’t give him any extra’s anymore. If only we could be so persistent in our own diets 😉 The most shocking thing really was that we were asked by the vet if we wanted to start treating him… as if we’d put a (in our eyes) perfectly healthy and loving cat to sleep over this?! No way!! Unfortunately many people apparently do, but Robin’s doing fine, so he’s gonna be with us for a while longer!

Well, that’s it pretty much.. we hope you’re having a nice holiday and we wish you all the best for 2006!