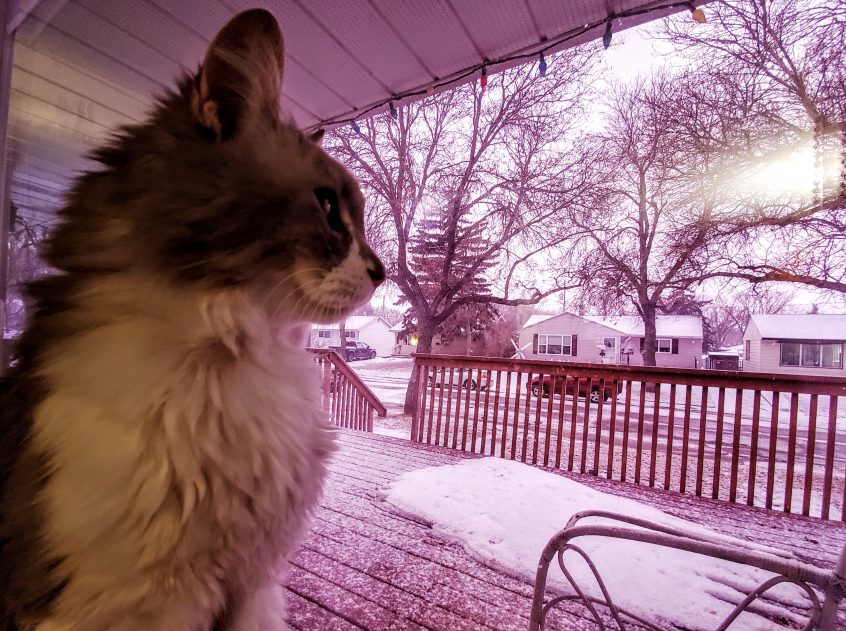 One of the prettiest things out there are sunsets. I think we can all agree on that? Who doesn’t love the colours! I think the prettiest ones I have ever seen are in Waskesiu here in Saskatchewan. But have you ever witnessed sunset colours, more specifically a pink sunset during snowfall? While it was overcast still?! I know I haven’t!

So no, I don’t think I’ve ever seen sunset colours shine through a cloud cover. We did witness it last night though!

There must have been a strong pink sunset in the sky. Right after some snowfall, or I think there were still some flurries, the world turned quite pink for a few minutes. And it was still completely overcast! It was a strange thing, but pretty.

I didn’t think my phone camera would pick up the colour. Have you ever tried to capture sunsets with a basic camera with all its reds and pinks and oranges? Well, my first pic, the one below, definitely picked up on the pink sunset during snowfall thing 🙂 I saw several people post pics on Facebook that had the exact same colour.

I then took another pic with Gandalf in the foreground and the pink hue in the background and reflecting on him (the featured image on top). It even looks surreal when I look at the pictures now. It was something special!