He’s back home! Was he gone already?? Oh yes, we had to leave him at the vet on Monday, because it turned out his minor limp was caused by a fractured leg and in need of a 900 dollar operation!!! On Tuesday we had a lot of drama with the Humane Society, who at first wouldn’t take any responsibility for putting a visibly injured cat up for adoption. They didn’t detect the limp as the animals don’t get to walk around freely and said the animals aren’t being checked by a vet before adoption! Oh we could bring the cat back and they’d reimburse the costs so far – well, the cat would’ve been put down and I understand that’s what they would have had to do if they’d found out before adoption, but it’s our cat now and that was NOT an option anymore! We were shocked by all this and so upset all day – we knew the cat was doing fine, but we were a total mess!

Whether it was Nico’s call or Cortney’s mail to the HS, but in the afternoon someone from the HS called to apologize and offered to pay half the bill. Now that was awesome! And even more important, they owned up to their responsibility for these animals and agreed this shouldn’t have happened (we do understand the pressure they are under as a non-profit organization with so many animals that come in). Now that restores the faith a bit, eh. Still I find it shocking that the animals don’t get a proper check-up before adoption. They do pay for a first check-up AFTER adoption and I know it’ll cost them more, but they should have this done BEFORE adoption and save a lot of families a lot of heartaches.

But anyway, our Rider had surgery yesterday (the fracture was just below the head of the thighbone and they removed the head, he was also neutered). Today we could finally take him home!!! After limping around a bit (he’s not allowed to jump at all for the first while), he’s now asleep 🙂 Well, someone said he wouldn’t be a proper Rider without a leg injury (for our non-Canadian following: the Riders – Regina’s football team the Saskatchewan Roughriders – are dealing with a lot of injuries this season)! Here’s our trooper: 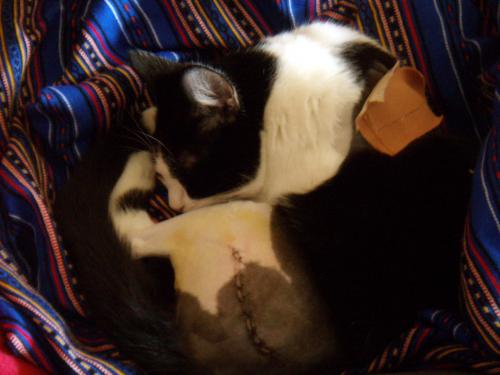