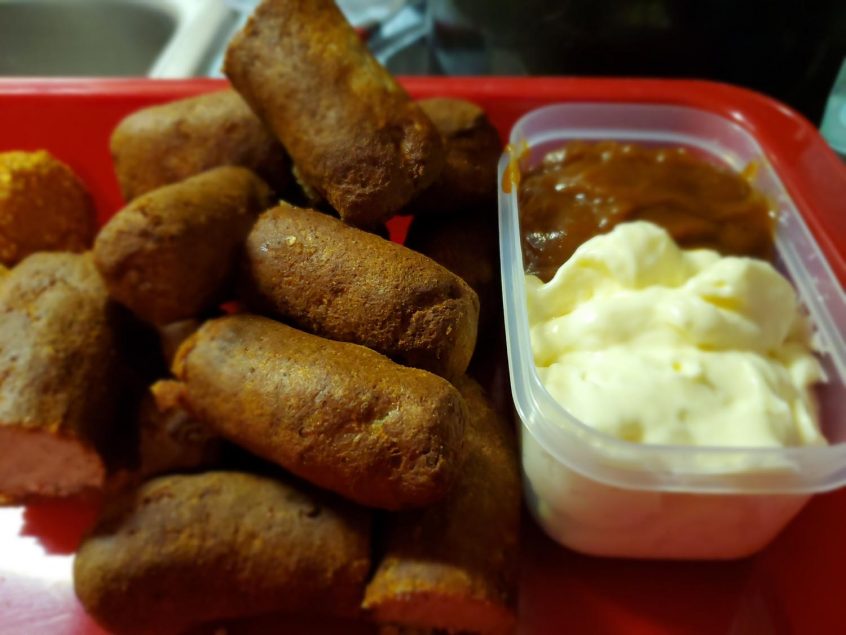 The most beloved fast food in the Netherlands is french fries with various toppings and accompanied by a large variety of mostly meat-based, deep fried snacks. The most popular snack is the frikandel. This sausage-like snack (no casing) is made of spiced, finely ground meat. It is cooked in simmering water and then deep fried. And today, February 4th, is National Frikandellen Day!

The frikandel is older than us!

There have been similar meatballs for ages, but it seems that the actual frikandel as we know it, was first made by Jan Bekkers in 1958. He founded the famous Beckers factory a year later. Different spelling on purpose, likely to distinguish himself from other companies in the family.

Why we make our own

Since we can’t import meat, you can’t find these frikandellen here in Canada, unless some company has tried to make some here. We’ve tried a few from Dutch stores in other parts of the country with varying success. But since we don’t have one here in Regina, we started to make our own. They have become the main attraction on our New Year’s Eve parties!

We’ve tried a few different recipes that we found online and like this one on veelkantie.nl the best. It comes close to the factory-made ones, but I think I need to use meat that is a bit greasier than the usual minced chicken and pork that we buy. Maybe we’ll add some pork belly next time. It’s just that we only have a very basic food processor and it helps to buy meat that’s already ground up. For the frikandellen it needs to be ground to a paté-like paste.

Put the meat in a bowl, mix all the spices in a cup and keep the crumbs and the cream separate. I usually double the recipe. In batches I grind and mix the meat in my food processor. After the first run I do it again while adding the spices bit by bit. Then I’ll do a third run where I’ll add the bread crumbs and whipping cream bit by bit. If you only have coarse crumbs like panko, you’ll want to grind them a bit smaller. After these three runs I end up with a fairly smooth paté-like and almost dough-like elastic mixture.

I use a 1/4 cup measuring cup to take some of the mixture out of the bowl. Use your hands to roll it into a sausage on your table or countertop. A little flour sprinkled on your counter will help against meat sticking to it. I try to make them all a similar length and regularly push the ends back in a bit while I’m rolling them.

In the beginning we tried cooking the meat in stainless steel pipes to keep them straight, but we hated that. It’s hard to do, there are too many air bubbles in the meat and they ended up being too thin. Some use small devices that push out meat like a sausage, but I’m happy with rolling them with my hands. It does take me about an hour to roll 45-50 of these from a double batch.

Cooking them in simmering water

In a fairly big cooking pot I bring water to a simmer. I have an old mesh basket, a left over from a round deep fryer I used to have. It fits in the biggest cooking pot of my set. You can do without, but using this makes it a bit easier to lower my raw frikandellen into the simmering water and take them out again. I can cook 5-6 frikandellen in one batch. Cook them for about 8 minutes (or until they come to the surface).

I start cooking as soon as I have the first few frikandellen ready, as I roll them a bit faster than they cook.

Freeze or deep fry right away!

After they have cooled off, you can deep fry them right away, or you can freeze them for another day. If I make them for a party, I cut them in two or three for party size snacks and serve them with mayo and curry ketchup. Check out how we make our own curry ketchup!

10 Comments on “How to make frikandellen”