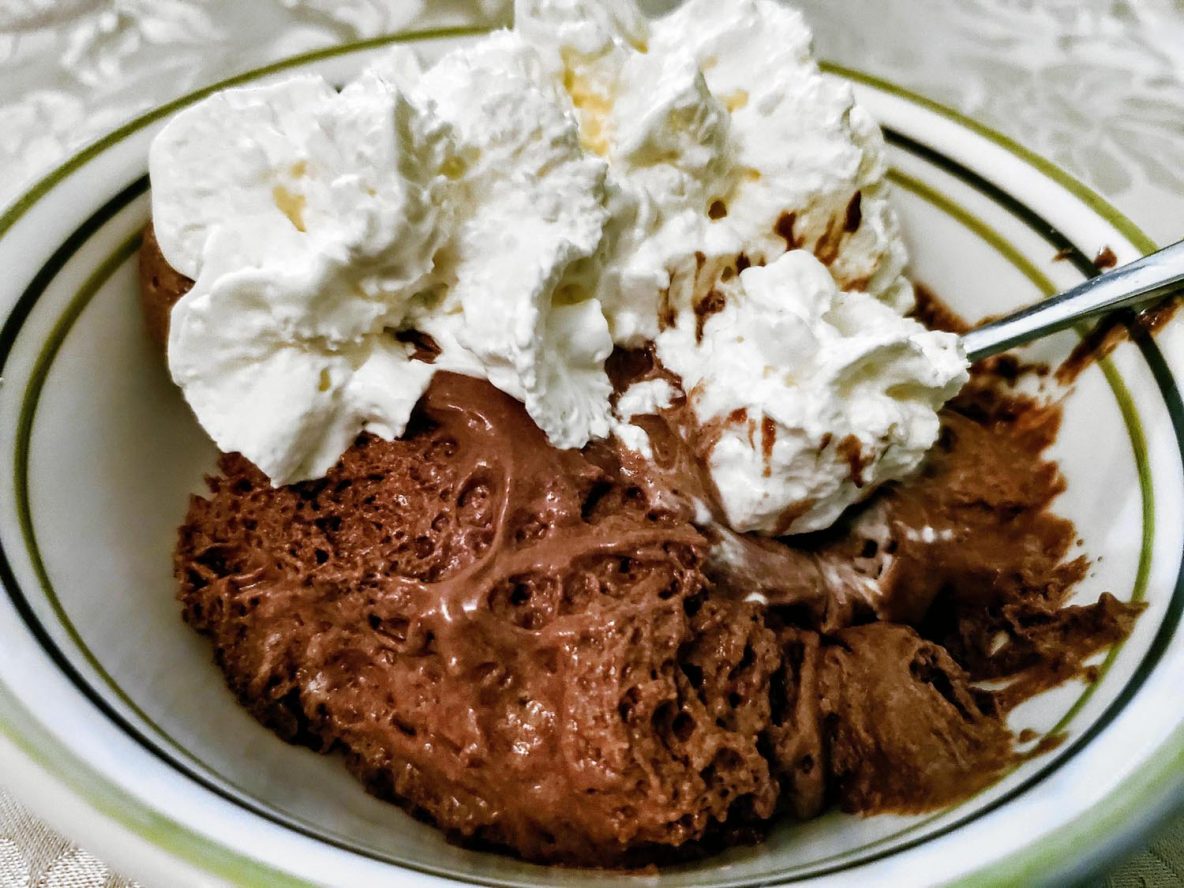 One of my family’s Christmas traditions was making chocolate mousse, or “heavenly mud” as it’s often called. My mom always made it seem so hard to do. After my mom passed away, my dad and I started to make it ourselves. And then we realized it’s actually pretty easy! My mom would for instance freak out about things that would prevent the egg whites from beating up properly. Like getting egg yolk in the white or draft from our back door, and I assume having a dog and kids bothering her in the kitchen wasn’t helping her anxiety either.

When my dad and I started to make it (and my older brother and his family), we found out it wasn’t all that bad! In all the years (decades, ha) I’ve made it since then, I never had a problem with beating the egg whites and only once or twice the mousse collapsed while it was setting in the fridge. Which is not that big of a deal to me… a little less airy, but it still tastes delicious 🙂

Let’s start with the ingredients: chocolate, eggs and sugar. My dad insisted on using quality dark chocolate that has at least 50% cacao. Personally I’m not that picky. I have used all sorts of dark (or milk) chocolate bars and these days I use semi-sweet dark chocolate chips. The eggs should be at room temperature, but if I forget to take them out of the fridge on time, I just put them in some luke warm water for a bit. And for sugar I just use basic granulated white sugar.

Separate egg yolks from the whites and don’t let any yolk get in the whites. The odd time that it still happens to me, I take it out as good as I can. So far I’ve had no issues. If it’s a lot or it gets mixed up, then there is no other solution then to start over. Oops!

Melt the chocolate carefully. Traditionally it’s been done au bain marie (over a pot of almost-boiling water), but these days I do it in the microwave. Thirty seconds at a time, stirring in between, usually just twice for this amount.

Beat the egg whites with the sugar, and a pinch of salt if desired, it speeds up the process. Just until it’s so firm that you can turn the bowl upside down without anything falling out 🙂 Save in the fridge until you are ready to fold in the chocolate mix.

Gently beat the egg yolks a bit and mix in the melted chocolate. Now this part I still find a bit tricky. If you don’t do it fast enough, the chocolate cools off before it’s mixed with the egg yolk and it causes chocolate lumps. Again, it’s still delicious if this does happen 😉

Gently fold the chocolate mix in the egg whites with a big spoon or spatula. Easy does it, you don’t want to lose too much of the air that you’ve been beating into the egg whites.

Pour your mousse into bowls and put in the fridge for at least a few hours to set. Serve with whipped cream!

This amount serves about 10 to 12 people. Unless they are like me and make sure they leave room for a double portion 😀 But in all honestly, it’s very rich, so you don’t need a lot of it to really enjoy it!