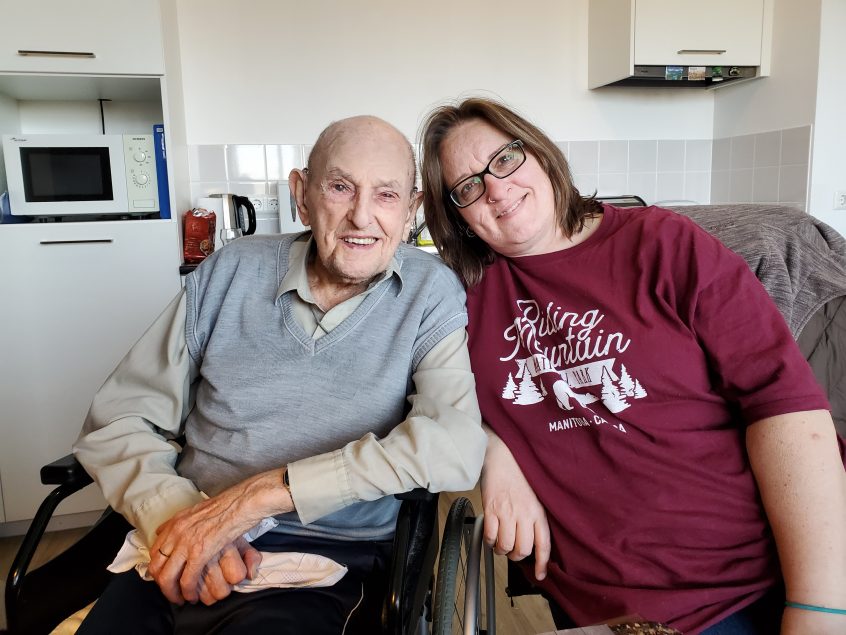 I would’ve never thought I’d ever have four “rest in peace” blog posts in a row. It all happened over the course of a good month, so I did not feel like work or putting up any cheerful posts in between. I also never thought I’d really have to say goodbye to my forever-youthful and indestructible dad at some point. Well, of course I did, but it’s kind of surreal when he had a life of more than 101 years (!!!) and most of it healthy! He passed away on May 3rd and we said our goodbyes on May 7th.

I’ve been dreading blogging about it and now that things are finally starting to sink in and I feel I’m actually starting to grief for my dad, it’s time that I finish this. I promise it’s really not that sad!! I translated the speeches of my brother Ton and myself and I really really hope you will read them, I think they are entertaining! Also adding a bunch of photos that were shown at his service. I think it was a great tribute to our dad! ♥

Ton and Rita were there with Martijn and they had a live connection with Sander and Amy in Seoul. Amalia was there with grandchildren Cathy and Robin. Her son Ruud and daughter-in-law Marie-Therese viewed the live stream just like Nico and myself. I had already recorded my speech on video. Good thing I did… after only minutes the live stream crashed and they couldn’t get it going again! I was so upset! Marie-Therese kept calling to have them fix it, to no avail. Very disappointing, Dela (the funeral home)!

Thankfully my brother received a copy on a USB stick right after the service, and he was able to send it to us when he was back home. As well as a very pissed off email to Dela! But I was more than glad that we were able to say our goodbyes that same day and it was beautiful. You can read the speeches by Ton and myself below, but Amalia also spoke about how they met and how wonderful their relationship of 19 years had been. There was some music (classical and popular) and a poem about being a “Brabander” (inhabitant of the province North Brabant) as well.

I want to thank you for your fine upbringing and support, especially in my teens and as a young adult. You have always been my hero. I could always count on you, even if life was not easy for you, for example when mom fell ill and died. Luckily you still had some good times with Ietje, but when you also lost her, Ton and I said to each other that it might be time you started dating a young thing, maybe she would be able to keep up with you! That young thing came in the form of Amalia, who’s 8 years younger and who indeed kept up with him to the end. We are so very happy with the trips and adventures you have been able to make together! For 19 years, who would have thought. And who would have thought you would come to Canada after Nico and I moved there! Ton rented a camper for his family and we would stay in hotels, but when we bought a camper ourselves, you didn’t mind sleeping in it! What an unforgettable holiday that was with the whole family.

In all those years we were sure that you would reach 100. You even lived independently until a few months before! The two years in Gagelbosch you had a nice apartment with good food and good care. We are very grateful for that. Your 100th birthday was great, how proud and happy you were with the many visitors. Meanwhile, the 101st came and went and we still visited last December. Dad, I am proud of how you always managed to enjoy yourself, although you had to give up a lot of independence in recent years. A beer every night and just keep breathing! Your sharp mind had eternal youth, and your body as well for a long time, but now it’s over. Rest in peace sweet daddy, I love you. Houdoe, wanne! (goodbye, eh!)

Amalia, Rita, Marlies and Nico in Regina, Martijn, Sander and Amy in Seoul and Marie-Therese and Ruud, Robin, Cathy and Hugo.

Today we are really saying goodbye to my father, a man I almost thought had eternal life. I remember well, when he moved to Gagelbosch at the age of 99 we said to him: “And now on to 100!” He said with a smile that he would do his best for it… and that’s what he did. Until his body started to overtake his mind in the last week. Still nothing wrong with his head, but his body was done. In addition to the discomfort associated with old age, Dad lost more and more control over his own body in the past week. A fall from his bed last Wednesday, with many back issues and pain as a result, was the start of a sick bed of little over a week. Fortunately, no Covid-19 virus was detected and Dad passed away peacefully… at the respectable age of 101. It was finished, however much we would have liked to see it differently. Especially Amalia will miss her buddy with whom she had daily contact.

Dad used to enjoy playing on the floor with Mecano, Lego and trains. I think he liked that even more than I did, because we had a large train yard on a large table in the basement for many years when we still lived in Germany, where only he could often be found. The interest in trains and model trains, “as long as it is Fleischmann,” he said, because Märklin he did not like, has always been apparent. In his room there were still a few wagons in the cupboard.

After I left the parental home and Rita and I started living our own lives, the parental home became a bit distant. During our family visits I noticed that Mom became a bit sloppy and forgetful, but dementia did not occur to me yet. Dad really kept the worries with him and never wanted to bother the children with this. A form of autonomy that he maintained to the end. After my mother passed away, Dad had a number of beautiful years with Ietje, the neighbour across the street, who was suddenly unpacked in the room as an “unexpected surprise” on Sinterklaas evening. For Sander and Martijn, who were still small then, Ietje was a real grandmother. When Ietje also died, we thought it would crush Dad, but his resilience dragged him through and especially when he started a relationship with Amalia a few years later he blossomed completely. Amalia has been his big love and great support for the past 19 years. Thank you, Amalia, for all the support you have given Dad, especially in the last few years when you saw that things were getting a bit less, while you were still like a spring chicken at the dance school and celebrating carnival.

With Amalia and Dad we have done many nice trips in the past almost 20 years. Walks in the woods, and when that was no longer possible, we went to all the zoos in the region with Dad in the wheelchair and a winner was always eating pancakes at the pancake house in Oirschot. One of our last trips was the National Military Museum in Soesterberg, where we had a lot of fun, especially after Amalia and Dad dressed up there in “Mongolian costumes” at an exhibition about Genghis Khan. Luckily we still have the pictures. Of course, the trip to Canada in 2009 was the highlight of the past few years. Together with Amalia in the motorhome with Marlies and Nico. Traveling 4 weeks at the age of 91 and 83 respectively. We had a great time together and that trip got a special place in our hearts.

Dad liked to be independent, he did things his way…. Amalia knows all about that. He was able to maintain that independence for a long time, but at some point it turned out that independent living was no longer possible. We still had to do our best to get the necessary recommendation (referral to speed up getting a spot in a home) for him, because the lady who did the intake thought he was so spry, especially when she heard that he still used the computer and ordered house slippers online. But it came about anyway.

Dad, about 2 years ago you moved to Gagelbosch, in a nice apartment with unobstructed views, independence, but also with a lot of care and guidance. You soon felt at home here, despite the fact that the circle had become smaller due to limitations in mobility. Amalia was now able to visit again more often and on Sunday she often stayed for dinner. You both liked that very much. In Gagelbosch we also celebrated your 100th birthday together. At first you didn’t really want anything special “We’ll just see who will come”, you said. But on the day itself, in the decorated room downstairs and with 70 guests, family, the deputy mayor and members of the war veteran association “Association of the Old Shock Troops”, you were just beaming and enjoyed that day. Especially when you were honoured with an official certificate from the “Old Shock Troops”. It immediately had to be framed and put on the wall in your apartment.

Everything was just same old, same old, “just taking it easy” you would always say, until last week when you couldn’t do it anymore. He told Amalia that he was done. We could hardly believe that, but in recent days I have also had to face reality. Dad I’m proud of you, your perseverance, your resilience and your eternal optimism. I will never forget the tip you gave us when you were 100 years old: “A beer every night and just keep breathing”.

Of course we have countless memories and photos of dad – here is a very small selection of the pics shown at the service with a few additions. They don’t represent his whole life, but the majority are some cool old ones, some from the Canada 2009 vacation and some from his 100th birthday celebration.