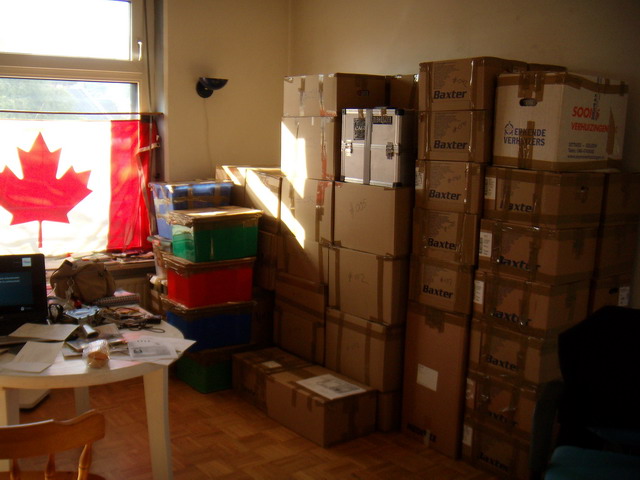 Hooray! It’s been 12 years since we arrived in Canada to stay! We first flew to Edmonton, where we had to go to Immigration to “land” as immigrants. We had a fairly long change over and friends were waiting for our arrival to take us to a restaurant. Later that night we flew to Regina, and because of some delay, we didn’t arrive until after midnight. But to me, the 18th is our emigration / Canaversary date 🙂

For the first four months we stayed with our friend Tim and then we were able to buy our home already. Not so obvious, because they were not eager to give a mortgage to the temporary workers we still were back then. We were able to move into our own home, adopt cats and settle. And the next year we bought an older motorhome and the rest is history haha.

We first came to Saskatchewan, because we already had a network of friends here through Tim and the local metal scene. And back then it was still cheaper than in other provinces, so it seemed a good place to start out. We did look into moving to the Kelowna region later on, but Saskatchewan kept winning on all points: welcoming people, welcoming employer, a home, great neighbours, great friends, great campgrounds. We realized we didn’t want to uproot ourselves yet again. And that even though BC has some spectacular scenery, we had fallen in love with our prairie scenery as well. We simply were already home!

Check out all our emigration related blog posts here:

Mind you, if you came here looking for info on how to emigrate to Canada, our process of 12 years ago is likely not current anymore. We came on a work permit after a job offer (took a year and a half to get from interview in 2006, through nurses association registration requirements including extra trip for nurses exam in 2007, to the move in 2008). After a while we applied for the provincial nominee program as Nico’s profession was in demand at the time. With that nomination we applied for Permanent Residency which we got in 2010.
For current information check https://www.canada.ca/en/services/immigration-citizenship.html

Here’s to many more Canaversaries!