Oh my, I can’t believe it’s been almost a month since my last post!

Not much is new though… only gig we’ve seen in the meantime is Jon Oliva’s Pain and that was awesome! Never thought he’d do so many oooold Savatage classics, it was a big party. And he dedicated Ghost In The Ruins to his friend Anke, who died last November. We knew and miss her too 😥

April 30th was Queen’s Day and we went to watch the games and celebrations in our neighbourhood: 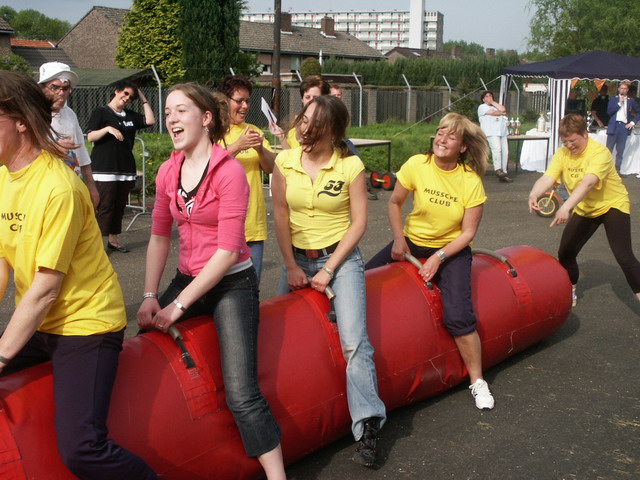 Last week we found some more work to do in the yard.. we had realized we wanted to get rid of the conifers on both sides of our yard. They haven’t been maintained well over the years, have very thick trunks and are too wide, that all makes them very hard to handle. At one side of the yard our neighbour Ron has planted a series of young conifers and since they look so much nicer, we wanted to take ours out. On the other side of the yard I wanted to get rid of them too, and since the neighbours already wanted to put up a new fence, we thought, no time like the present. We are stripping the trees and taking out some of the sand, so we can saw them off below the “surface” and let the roots in to rot in time. It would be practically impossible to get them out with roots and all by manual labour (and machines would ruin the paving), so we’re just gonna leave them and plant some low bushes and plants covering the earth. If we stumble upon roots while putting the fence up, well, we’ll just have to dig out that part that we need to remove then. Last weekend we couldn’t continue with all of this though, because I once again had a migraine (yep, another four weeks have gone by).

I’m looking forward to next weekend! Paddy is coming to visit, unfortunately without his gf Conny, but with Cora because he’s going to be visiting her the day before. They’ll come over on Saturday, stay until Sunday, Nico has early and late shift, and it’s going to be 32°C!!!!! BBQ & BEER & a long hot night underneath the pergola, wooh! 🙂