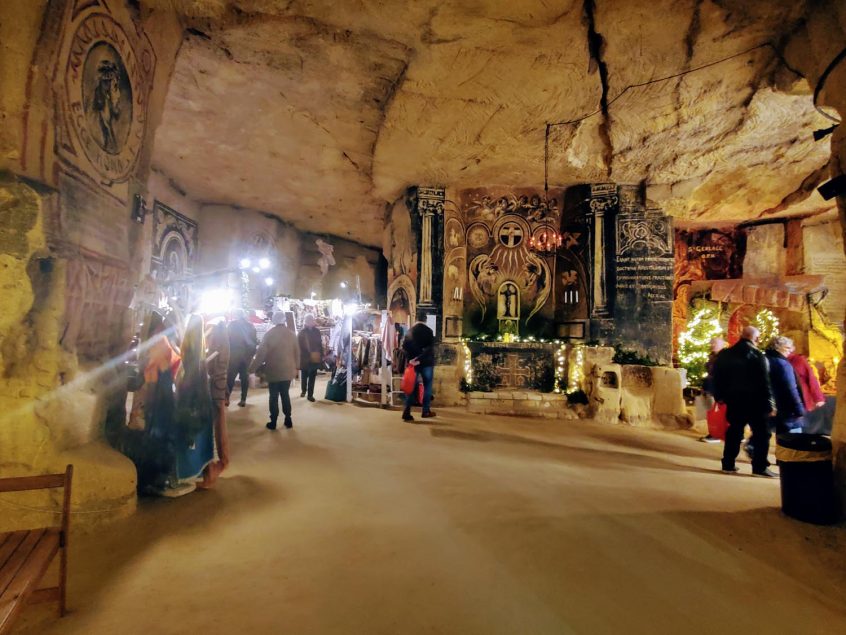 Christmas Market #2 this afternoon! We had planned a second stop on the route to Aachen in the medieval, picturesque tourist town of Valkenburg. More specifically, in one of their Christmas markets in a cave!

Valkenburg has a special place in my heart. It was a favourite vacation destination when I was young. I found love there for a while and lived in Valkenburg and area for several years. I have fond memories of that period of my life, but beyond that, Valkenburg is also simply a gorgeous place to visit. When I lived in Heerlen later on with Nico, we would sometimes take guests from abroad to this town, like our Canadian friend Marlin in this post.

It is a medieval town, built in the 12th century around a now ruined castle on a hill. It still has this medieval charm and it was very cool to see several big restorations done back in 2014. The Geulpoort was built in 1300 and demolished in the 17th century. It has been rebuilt from scratch! And the Grendelpoort (built in the 14th century) got its towers back. Impressive!

Most buildings are built of soft, yellow marlstone, taken from the marl caves (or rather quarries) underneath the town. The total length of all of these corridors together is 250 km! A few of these are open to the public. You can see many interesting features, such as charcoal drawings, altars and carvings in the walls, made by people who took shelter in the caves during a war, or American soldiers who rested there after WWII.

Valkenburg is also known as the Christmas Town of the Netherlands, as they host several Christmas markets, two of which are in the town’s famous marl caves. This makes for an amazing atmosphere as you can well imagine! We only had a few hours for this stop, so we asked local friends Corine and Roy to meet us at a parkade and visit a market together! We chose the one in the Velvet Cave.

After an enthusiastic reunion in the parkade, we walked through the town centre to the other side where the caves are. We crossed “Santa’s Village”, a small Christmas market, before it had opened and admired the rebuild Geulpoort. We walked down the Grotestraat, where most of the restaurants and bars are. The narrow main street (pedestrian area) is lined with covered and heated patios! You can see the castle ruin on the hill at the end of the street. We went through the renovated Grendelpoort to the streets where the caves are, and thankfully there was no line (in the weekend you may have to wait an hour in line).

In the Velvet Cave we enjoyed the atmosphere, the many beautiful stalls and their merchandise, a coffee with a snack and each others company. Just perfect! Let the pictures speak for themselves 🙂