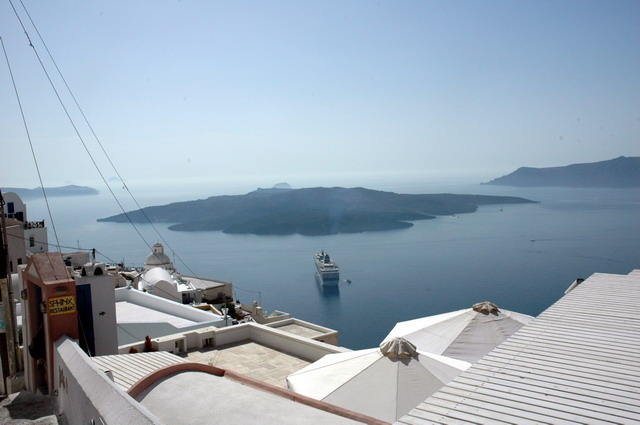 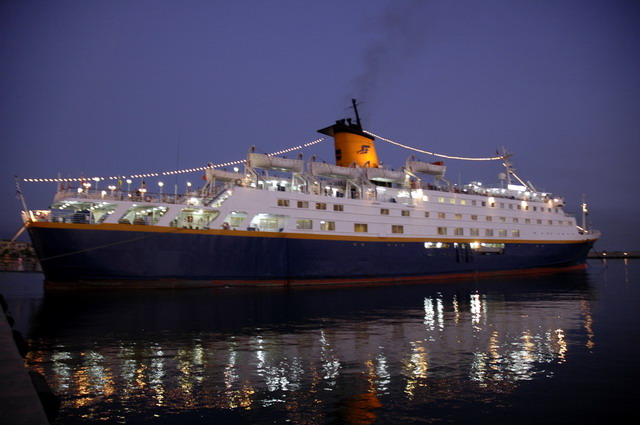 On our ninth wedding anniversary we got up at 5.15am to go to Santorini. We drove to the port of Rethymnon, but to the wrong part at first and had some trouble finding the way to where our boat was, through the small one-way alleys of the old town, but luckily we got there in time. When we were on the boat we were immediately directed to the restaurant for a big and complete breakfast buffet. After that we went on the open deck to enjoy the breeze. At 9.30 there was a Dutch meeting about Santorini and the excursion you could book for 20 Euro to Phyrgos, Ia and Fira. We bought a little book about Santorini and the rest of the boat trip we stayed on the deck. At 11.30 we all had to go to the theater where the entrance/exit was. We missed the view of sailing into the circle of (volcanic) islands that make Santorini (no windows there), but we got to see that (in a much better light anyway) when we left again. It was too full in the theater and we had to wait over half an hour before we were actually ready to leave the boat, in Althinios

But then the view on the cliffs alone was already impressive and by bus we went up on steep roads and the view over all the islands and the caldera (the water in between) was overwhelming, just like on the postcards. Robby was a fun guy and a pleasant guide.

We drove to Phyrgos, where we, busloads of tourists, were let loose for 45 minutes in the small alleys of the medieval centre. One very old woman was urging people to take pics of her (she was in black, but wearing a Santorini baseball cap, geez) and then expected to get payed.

Then we drove to Ia on the north end of the island in half an hour, with constant great views and Robby telling us a lot about the island and the several colors of different volcanic layers.

Ia’s the town where most of the postcard pics are being taken. Houses carved out of the cliffs, one roof is the “upstairs” neighbour’s terrace, and many tiny, private churches (everybody wanted to be closer to god then the next guy). Most of it is painted in white or bright colors like yellow, pink or terra and can be reached by small, 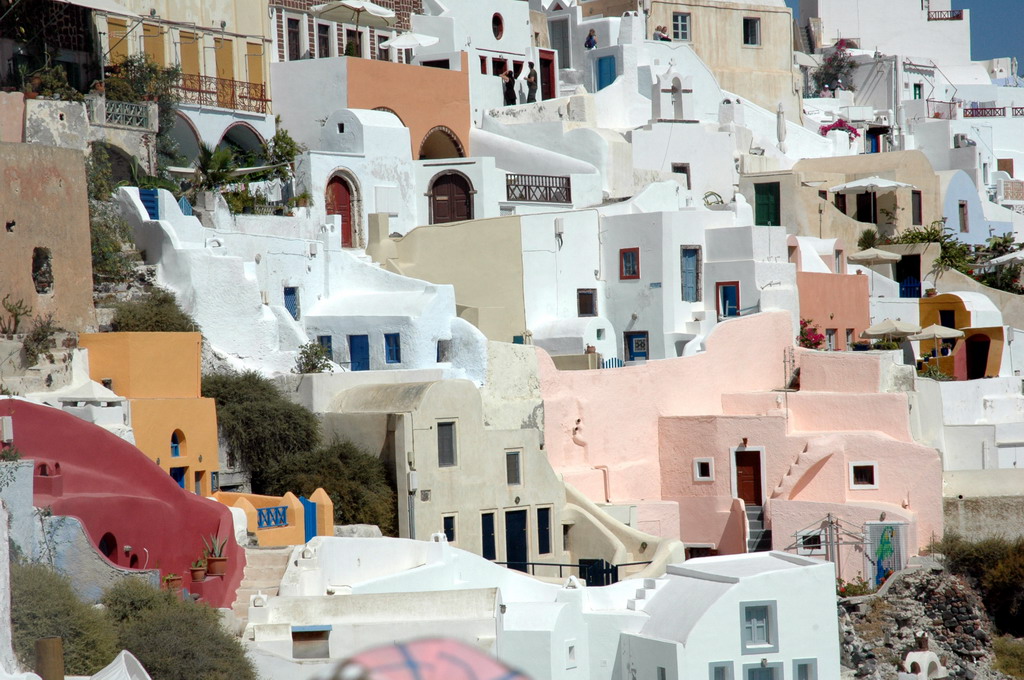 irregular paths or rather, staircases. In the scorching heat (Robby guessed 36 degrees) Nico and I went down on one staircase, found one that went up again a bit further and followed that up again. I already needed water, so I was in agony climbing all the way back up again! Back on the main path, Nico got me a huuuuge bottle of water – must’ve been the nicest wedding anniversary present he ever gave me! 🙂 That main path was very romantic with lots of artistic and souvenir shops, but we didn’t have time to look around a lot. We needed the good hour to walk and find as many postcard views as possible to take pics of 😉 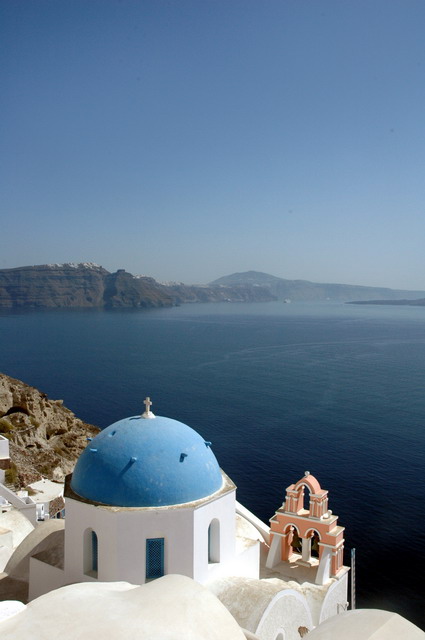 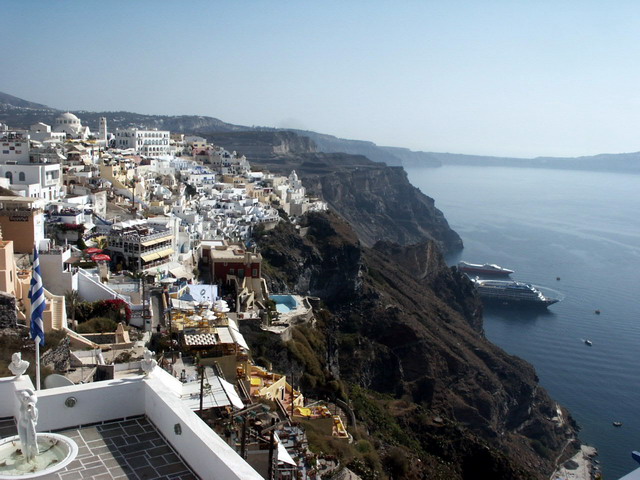 After a short drive we got to Fira where we had also little over an hour. Lots of shops there, esp. jewelers, but we walked to the cable car and sat in a taverna for a bit (tuna sandwich for Nico and baklava for me, mmmmm!!) with a view over all of Santorini. Lots of postcard views in Fira as well! This whole trip is a mass tourism hasty job (which was to be expected of course) and there’s hardly time to take it all in and truly enjoy. We took a bit of that time in Fira though and I think we’ll enjoy it more thoroughly when looking at all the pics afterwards! Then we went to the cable car and the line had gotten so long that I was scared we wouldn’t get back to the boat in time! The other option of 600 big steps down wasn’t an alternative time wise, but luckily the line for the cable car moved pretty fast and we got down in time. Little boats took us back to the Golden Prince and we had some more awesome views while sailing out in the evening sun.

Our turn to get some dinner was close to 8. The buffet was OK, but no drinks were included, not even water or a soft drink. That sucked, but the food we took was OK. After dinner we got something to drink and spent the rest of the trip on the open deck in the back in the warm evening air. When we got back to Rethymnon again, we looked at all the pretty lights of the town and waited as long as possible to go down into the theater for the exit. We were dirty (sweating all day in 36 degrees, salty sea air) and tired. It was way too short, too touristic and hasty, but we got to see some impressive and unique views and that’s what it was all about in the end, of course. And the pictures will give us pleasure for a long time to come! It would be better to visit Santorini for a few days, but it’s expensive to stay there and I don’t want to think of having to walk all those steps and stairs all the time 😉 It was still a wonderful day to spend your wedding anniversary!

First thing we did after sleeping was taking our showers! We were too tired to do that when we got back late (11.30pm I think). It was a bit cooler today and because it was my (42nd) birthday I wanted to have pancakes, so we went to ApiCorno for breakfast. 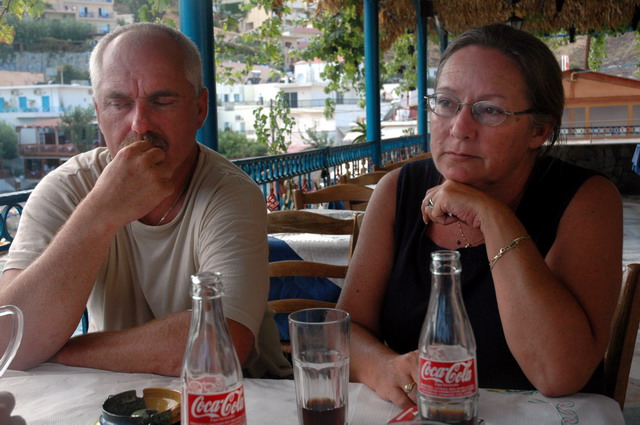 Then we drove to Bali to meet with Margret and Carel (I know Margret from a Canada forum), who were staying in Chersonissos (and Bali is kind of in the middle). We noticed that the harbour was a half an hour walk from the bus stop on the new road, so around 2 we drove to the main road to see if they got off the bus we had just seen. We didn’t know what they looked like, so we had to see if someone recognized us, hehe! It worked and we did find them! Just the two of them, Carel’s mom stayed in Chersonissos. We took them back to the harbour, where we sat on a terrace overviewing the bay and we drank, chatted and laughed for hours! We had great fun together and decided to have dinner in Bali as well. For that we went to the beach tavernas closer to the new road. We left around 8pm after a very very fun day with great company – I could not have spent my birthday in a better way!

Slowly we start to think about what we want to do in the last days. I hope we have a chance to go to Omalos for a last drive through the mountains, but it will depend on the weather (it seems to be changing). We dropped Gramvousa from the plans, but I think we’ll be spending some more time in Chania. 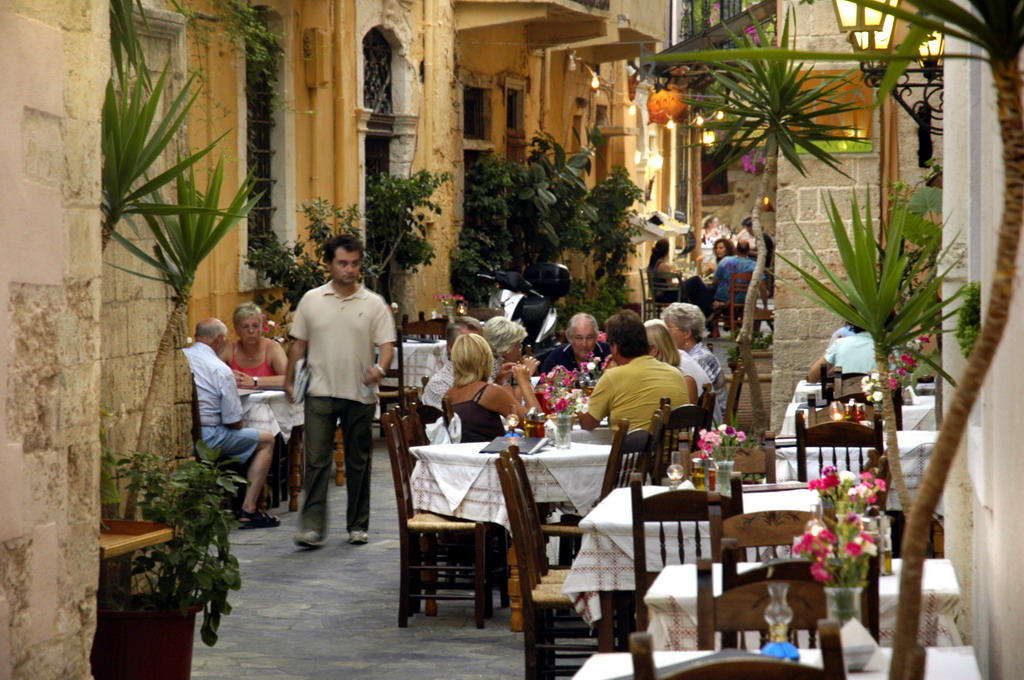 Nico went there today, but I didn’t want to walk around a lot, Santorini was a bit too much for my back so it’s bothering me a bit.

When Nico got back from Chania, we couldn’t really decide what to do for dinner. In the last minute we went to the supermarket after a sudden craving for spaghetti carbonara and after we’re done here at the internet cafe, we’re going to make it ourselves in the apartment. Yummy!

5 Comments on “wedding anniversary on Santorini – birthday with Margret & Carel”