Thanks for the anniversary and birthday wishes! Casper, 42 must’ve been a typo, what was I thinking.. I meant 21 😉 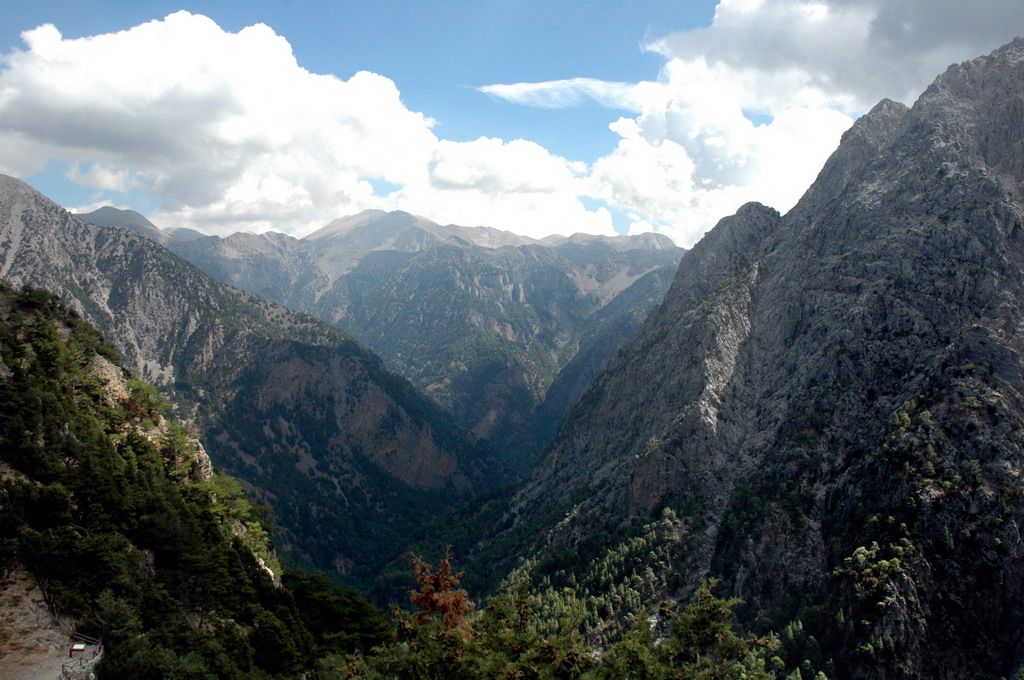 We had one “mountain” route still planned, and we went to the entrance of the Samaria gorge in the White Mountains. The drive was amazing, a lot of rough scenery, mountain goats and almost at the end the Omalos plateau on 1200m. The view from the entrance of the Samaria gorge (or rather, the taverna above it) is breathtaking, probably the most impressive mountain scenery I have seen on Crete. Looking down in that gorge made you see how high those White Mountains are. The temperature there was a lot cooler than at the coast, the wind was even chilly! Nico got cold… imagine! 😉

The drive was pretty tiring and we both slept for a while when we got back to Kalives. For me unfortunately because a migraine came up, despite the fresh air. After some sleep it was a bit better and we went to Peperia for dinner, I wanted those stuffed peppers (with eight sorts of cheese) again 🙂 We took kalamari (octopus rings) and courgette balls as starters and those peppers and pork chop for the main dish. Afterwards we got some halva, grapes and raki, and guess who had to drink all of that (with me having that migraine) 😉

Despite the migraine I wanted to go out, figuring fresh air is always good, plus we wanted to go to Roka again and today was our last possibility. So after breakfast we drove to Chania, I went to Roka while Nico took pics of some streets and the market hall. At Roka we discussed our order for the pillow with Anja, who plans to catch up with things in the winter, so we won’t have to wait another four years 😉 We also discussed the website I want to make for them and Nico took a lot of pics at the shop. Unfortunately we just missed Mihalis, so we didn’t see him at all this time. We also walked around looking for some souvenirs and I bought some ceramics from my dad’s birthday money.

Back in Kalives we slept/read for a while and when I was feeling a bit better again we popped in at the internet cafe. This will probably be the last update while we’re on Crete, I’ll post a last one when we’re back home! It’s been a great vacation, but we’re also looking forward to go home to Robin again 🙂