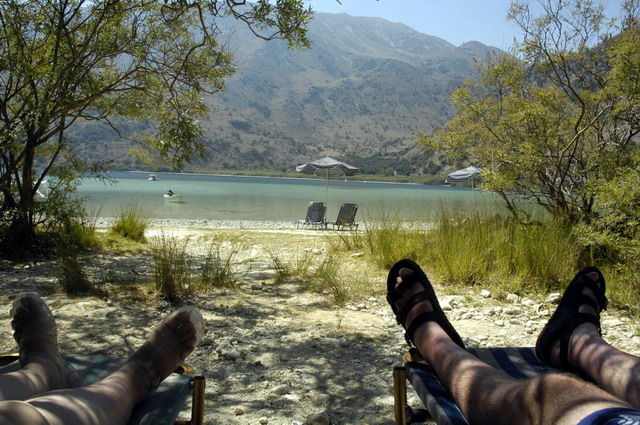 Hi! We’re in Chania now, time to update the web log! We’ve been to a.o. Lake Kournas and last night we saw some good Mediterranean rain, thunder and lightning! 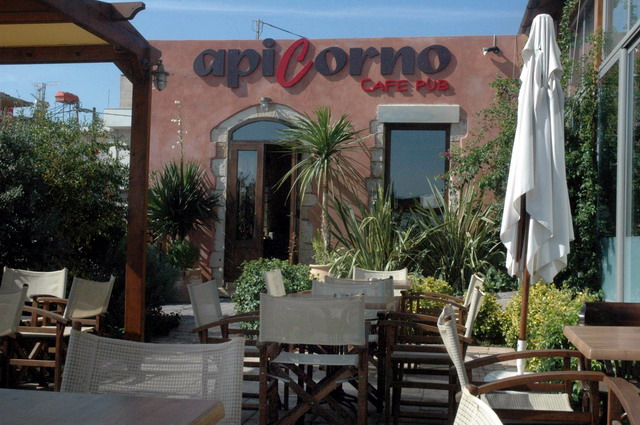 We didn’t feel like another bread breakfast and went to ApiCorno again for an American breakfast (I had pancakes with maple syrup this time).

After that we drove to Lake Kournas, a beautiful little lake not far from Georgioupolis. The scenery and atmosphere are very special and we always enjoy swimming in the (shallow part) of the crystal clear water (not salty for a change heh), relaxing on the sunbeds underneath the small trees, exploring the lake on a peddle boat and drinking or eating at the Korissia taverna at the shore. We spent all afternoon there and after peddling for an hour we worked up such an appetite that we had an early big meal and didn’t go out for anything anymore in the evening.

I don’t know why, but I was still so tired in the morning, had a little nap after breakfast and got “disturbed” by Eleftheria who wanted to clean and change the bed and towels again. That was my cue to jump up and get going – we wanted to go to our beloved Chania today. Finally! Why not earlier if we love the town so much, you may think? We dreaded it, because we knew once we’d go there, we wouldn’t want to go anywhere else anymore 😉 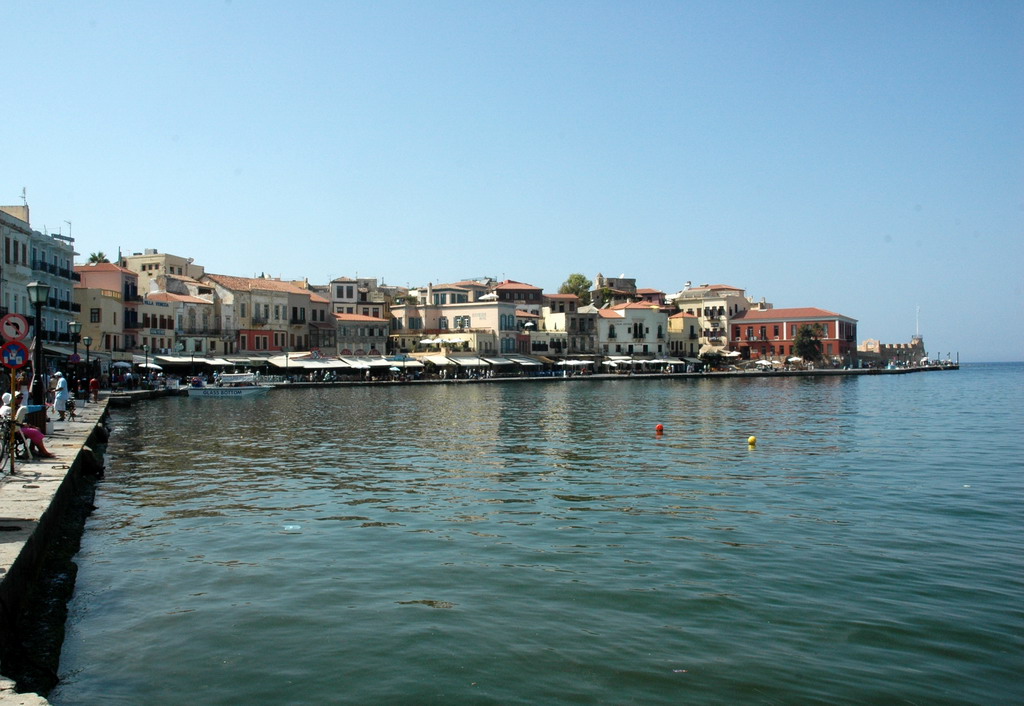 But no more postponing, today we finally went to the old harbour, parked our car next to the old moat, noticed there were several of the old houses on top of the Venetian wall gone like Tony Fennymore said would happen four years ago, we walked to the sea, passed the “hand” monument and went around the corner to enter the harbour itself. Beautiful as ever! We strolled along the shore and were approached by lots of taverna employees to sit and have a drink or food at their taverna. But we went to “our” old place again, the rock and metal bar Avalon that used to be Dionysos back in 2001. The bar didn’t change much though, so we sat there, had a couple of frappes, watched the people go by, enjoyed the view and the music and met a few interesting people. Steve from the States, who worked on a boat that was in the Souda bay right now, after some beers he already invited us to come to South Carolina where he would show us around in the mountains and go fishing. That was of course very generous, but I don’t know if that would ever happen since he’s on the sea 300 out of 365 days of the year. We were joined by another American who had retired from the air force some months ago. It turned out he had been stationed in Brunssum (which is next to our hometown Heerlen) for a while! Small world 😉

After a while we left to stroll through the small alleys behind the harbour, the place where the true beauty of Chania lies. Those small old picturesque alleys with all their colours, shops, tavernas and old Venetian/Turkish buildings are just the most gorgeous ones you could possible imagine. Like we have said before, Chania is the most beautiful city we’ve ever seen – at least this old part of it.

We looked up the nicest store in town, Roka Carpets, where Mihalis and his wife Anja weave traditional things from carpets to rucksacks in 100% authentic Cretan style with Cretan wool, dyed with natural means and using Cretan colors (lots of red) and patterns. We spent a lot of time there in 2001 and even planned to make a little website for them, but I never got around to do that. We walked around in the store and I said to Anja that we had been there four years earlier but it was still all beautiful. She looked at me and said, I remember, you’re the web designer, right? I was floored – she remembered us??? So yeah, she did!

She explained the shop had been closed for the most part for a few years because they had a second son and taking care of the family took up a lot of their time. This summer they re-opened again and now she’s working hard on all the orders they still have, 4 big books by now! No wonder we hadn’t heard anything in that time.. we’re still in one of the books 😉 Anyway, I said I would still do a site for them (which won’t be a lot of work once it’s done, they don’t want to sell through the site). We sat there, drank frappe (again LOL) and chatted for a while, then went back to Kalives around 6. We went by the supermarket, ate a bit at the apartment, showered and went to Provlita for a late meal. Not long after that we went to sleep, tired of doing nothing all day basically 😉 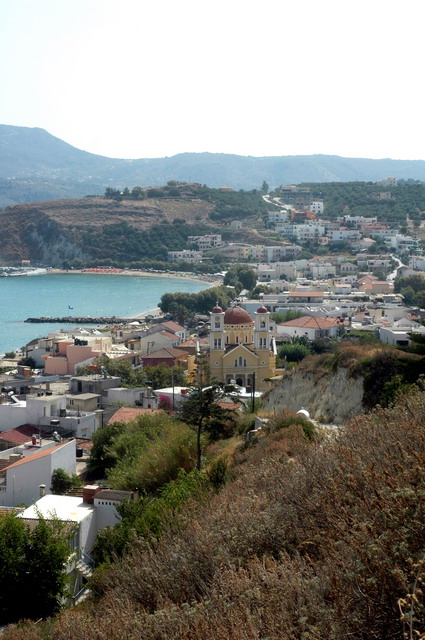 We slept pretty good and luckily I woke up refreshed again, unlike the day before. Today rain and thunder was expected, but the day still started very hot.

We thought we’d better not go far, so we tried some small roads behind Kalives, went to Aptera (old ruins on a high hill from where you have magnificent views – but the battery of the

camera died), had something to drink at a taverna and drove through Neo Chorio and Armeni back to Kalives. Nico was restless and went for a stroll through town, I sat on the balcony with the laptop 🙂

Slowly the clouds moved in and got darker and darker, close to 6 the thunder and rain started. We could see it on both sides first, then it came closer until it was pouring heavily in Kalives. It lasted almost two hours I think and the air was heavily smelling like wild thyme. We saw the thunder slowly move away from land onto the sea. A great light show!

We went for dinner at Peperia at the west beach, Nico’s mixed grill and my stuffed peppers (with 8 different sorts of cheese) were delicious! It was dark, but the outside area looked very nice too, right at the beach, so we’ll have to go back again soon, when it’s still light. Afterwards we sat on the balcony and watched the continuing light show until close to 1am. 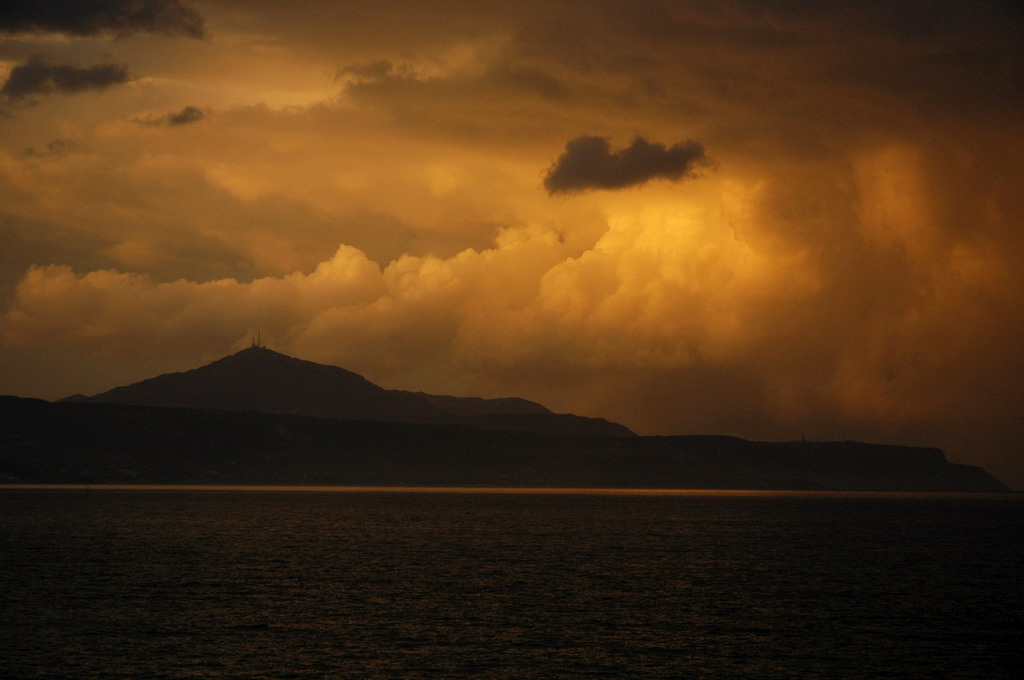 Each time that one of us would wake up in the night, the light show was still there. In the morning we had some new rain and thunder, but towards noon it got a bit better. Still clouded for the most part, but we decided to go to Chania again. And here we are!

Plans so far: chilling in Chania for today, tomorrow Nico wants to walk the Imbros gorge and we’re looking into excursions to Santorini! Talk to you guys soon!

◀Previous Post
Next Post▶
How to navigate our posts:
1. MOTORHOMING! are all our camping trips with our motorhome since 2009, and related info.
2. SASKATCHEWAN is for all non-camping trips, activities and info within our province.
3. OTHER DESTINATIONS are all non-camping trips and info elsewhere.
4. OUR HOME LIFE has everything else about our (personal) prairie life in Regina! Also about our life in the Netherlands until 2008 and our emigration to Canada.