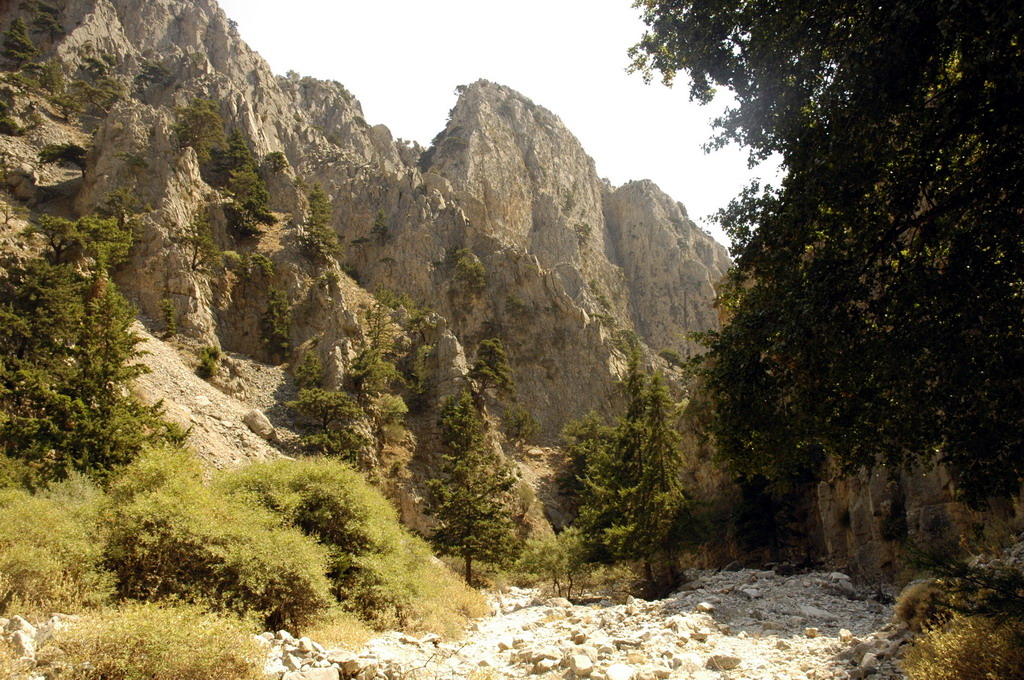 After spending some time in an internet cafe we walked around in the old centre, also away from the touristic part, old alleys where you can really go back in time and vision people walking around or riding around with carriages and horses or something. Nico was so sorry he didn’t bring his camera and he said next time he’d say he’s not taking his camera I just have to hit him on the head with one 😉 We had a great spaghetti at a taverna called “the Park” (the same place where we went online earlier BTW) and some frappes at Avalon. At night we went for dinner to Mathos for the first time, it’s close to Akrogiali. The stray cats there were loudly begging for food and fighting to get it. We don’t want to know about all the hardships these cats go through to survive, looking at their wounds and scars is hard enough.

After breakfast Nico drove to the Imbros gorge on his own, while I stayed at “home” to wash a few things, read and play around on the laptop. My back is doing fairly OK when just walking to town or walking around somewhere, but I wouldn’t dare to walk a 8 km gorge. I would’ve liked to go with him for the ride, but then I’d have to wait for many hours pretty much in the middle of nowhere to wait until he finished his walk through the gorge, had a rest after that and got back to the start point of his walk by bus or taxi. Of course it would’ve made sense if I had a driver’s license, then I could’ve met him at the end. I preferred to enjoy myself at the apartment, which is much more luxurious than a standard Cretan taverna chair 😉

Nico phoned from the Imbros gorge when he had a connection, saying it was pretty hard, lots of (loose) stones, and he was exhausted, but probably almost there. In total it took him 3 hours to walk the gorge, including a few short rests. He was able to share a “cab” (pick up truck) with others back to the entrance of the Imbros gorge and he got back to Kalives a bit after 5pm. Exhausted, with a sore body and some blisters, but damn proud and with a bunch of cool pictures 🙂

Of course Nico didn’t want to walk anywhere this night, so we drove to the center to find out about tickets to Santorini and to buy a few pita gyros to eat at the apartment. But then Nico decided to have dinner there anyway and we sat down at a simple taverna (don’t even know the name) next to ApiCorno. We hadn’t been there yet, but the food was good, the meat of my big chicken souvlaki was very juicy and Nico had swordfish. 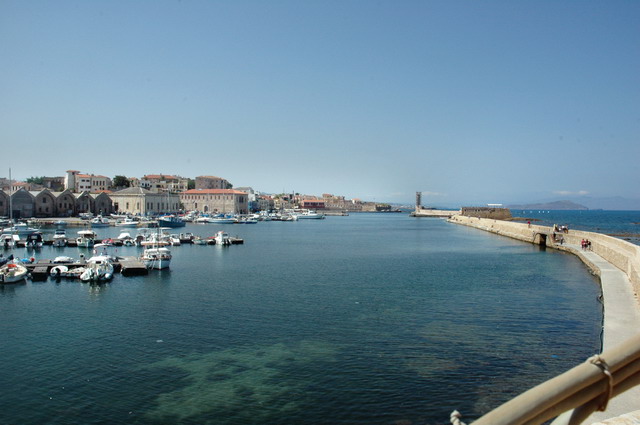 Of course Nico was sore pretty much everywhere, so I asked where do you want to go today? I already knew the answer: Chania 🙂 See, I told you that would happen! Once you’ve been there… We even had breakfast there at the old harbour, which was very nice (we were extremely hungry by then and the breeze was nice), then we walked to the Turkish mosque and around the corner to the actual harbour, we went to the end of it and then back through the Kasteli neighbourhood. After some hours at the Avalon terrace we had something to eat at “home” and had a nap. After that we didn’t get hungry again, so we sat on the balcony all night.

Tomorrow we want to go on a day trip to Santorini! A romantic detail is that it’s our ninth wedding anniversary 🙂 We just checked the weather forecast and it seems all OK for tomorrow, so we purchased the tickets. 70 Euro each, but I’m sure it’s going to be awesome to see those postcard pictures for ourselves. The boat takes three to three and a half hours, leaves at 7am and includes breakfast and dinner buffets on the boat. We’ll have the option to do excursions on the island and we’ll be back in Rethymnon around 10pm I believe.

So tomorrow it’s Santorini and the next day, my birthday, we plan to meet some people in Bali. See you again in a few days!