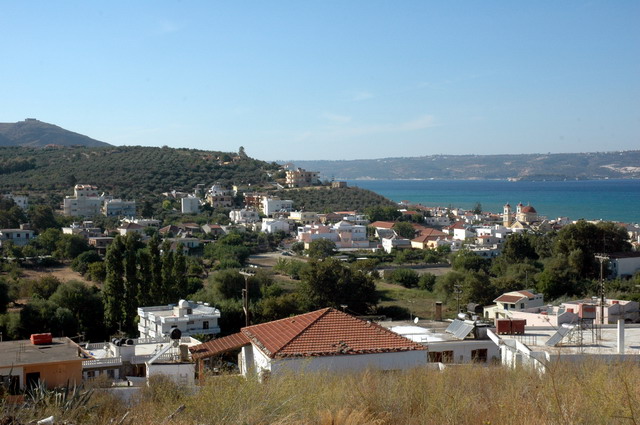 we’ve been driving around, swimming and even took a trip through the beautiful mountains to the south coast! Read on…

An hour after we were at the internet cafe, we drove to Plaka to have dinner at Harokopos. It was good to see Fo-Fo again and their chicken in tomato sauce and moussaka were delicious. We ended the night at our balcony, even in the dark there is a view (lights on Akrotiri and of Kalives and Plaka on the other side, boats, landing airplanes) and the sound of the sea. 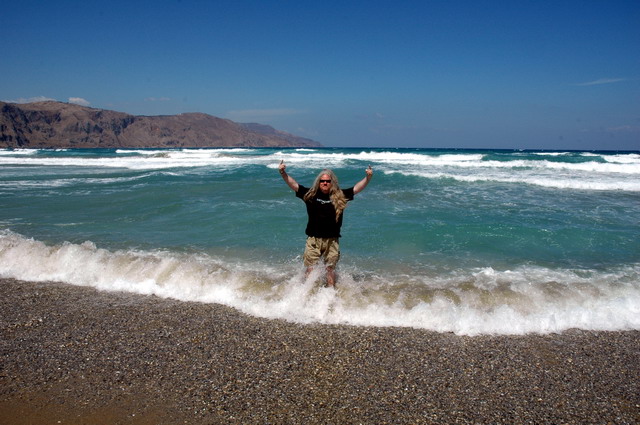 Today we drove to Georgioupolis over the old road, through Armeni (where we stopped and took some pics in the center of the town) and Vrysses. First we spent a bit of time at the big beach east of Georgioupolis where we walked through the water a bit and ended up getting half our clothes wet anyway because the waves were so strong LOL (strong wind, rough sea, red flag). We then drove to the town, walked around looking at the harbour, the river and the shops, enjoyed a frappe on the comfortable terrace of Blue Moon, and had a tasty gyros pita before we left. We took another route back, through Vamos and made pics of some great views! 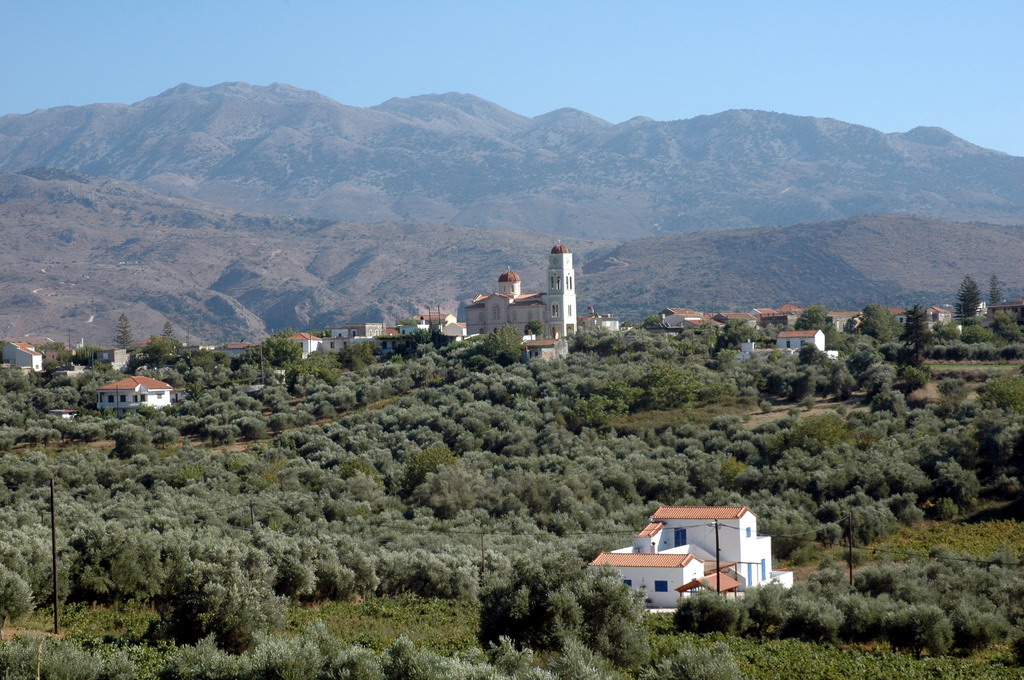 Tonight we saw our friend Victor (from Chania) again after four and a half years. He came to Kalives and we had a long dinner at Akrogiali, good times!

Instead of buying bread and having breakfast on the balcony, we went to a sea-side bar (ApiCorno) to have an American breakfast: eggs, bacon, sausages, hash browns, toast, coffee, juice and water: not to compete with a Canadian breakfast at Stan’s Diner, but as close as possible and delicious nonetheless 🙂

We wanted to explore a part of Akrotiri we hadn’t seen yet (west side) and hoped to find a place to swim as well. First we drove to Agios Onufrios, which is situated at a small bay that would be totally idyllic if it weren’t for a big ship, a dock and a too filthy little beach. The little taverna with sunbeds couldn’t make that right and we didn’t stay. Next was Kalathas and that was a whole different story. We found a beautiful beach with tavernas, sunbeds, people playing beach volley and a small island about 100m from the shore you could swim to. We folded out our big beach towels at the end of the beach and enjoyed the crystal clear water, sun, scenery and our books for a bit. Nico even dared to swim to the island.

After a few hours we drove back, took a wrong turn near Chania and ended up driving around in the outskirts of the town, but eventually found our way out again. We didn’t have lunch or an afternoon snack yet and Nico craved the chicken wings of some fast food place in Kalives (Simon’s) so we had a full meal there before returning to the apartment. After a good shower (why can’t they put a bit less salt in the sea? 😉 ) we decided to relax on the balcony for the night and after some more reading Nico went to get some pita gyros and bread instead of us going out for dinner. I’m finally into my Lord Of The Rings story again (3rd and last part) and I should really make more time to read when I’m back home, I missed it. 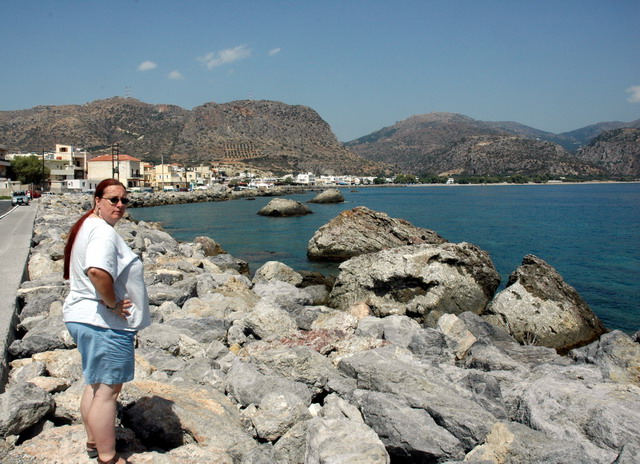 It’s a bit hazy, but we decided it was about time for a trip to the south coast anyway. We went to Paleochora, the road to get there was good and we passed many small villages and awesome mountain views. Many parts were very green and towards the south there were a lot of trees of all sorts. Often the road would lead through many big olive trees on the slopes, beautiful! Paleochora was smaller than I thought, but nicely situated on a small peninsula sticking out into the Lybian sea. You could look back on the majestic coast, for the most part the mountains just drop into the sea there. East of town was a promenade and a rocky shore, at the west side was a huge beach, making this town the most touristic one at the south coast. The town itself had some nice alleys with kafenions, shops and (just a few as far as we’ve seen) tavernas.

On our way back we strayed from the main road to follow a sign to a taverna 100m down the road: underneath big trees, next to a creek (talking about an un-Cretan scenery!) we enjoyed some good frappes and a Greek salad. Truly a heavenly spot! That was still in Plemeniana so we still had most of the way back ahead of us. When we got back to Kalives we rested a bit and went to dinner at Provlita again: Mythos beer, sausages and beef stew for Nico and white wine, saganaki (fried cheese) and pork souvlaki for me. I still had trouble finishing my half liter of wine, when they came with the free desserts: grapes, cake and raki! Wow, finally our first raki, it was about time haha! I only had one shot after all that wine, Nico managed to drink the rest, which were five more shots I believe!

Needless to say we slept like a log 😉 Although we never seem to find the best balance between keeping our doors open at night and using the airco. The natural breeze is much nicer, but at 1 I woke up because it was too hot (no wind) and I heard a mosquito for the first time. We closed everything and turned the airco on, but you’ll constantly feel cold air circulating – not healthy to sleep in that cold stream, but we didn’t have much choice. At 6 we woke up and you could feel that the muscles had cooled off a bit too much. Nico always wakes up with back pains in other beds, but it was worse now. As often he sat on the balcony for a while to relax the muscles in his back again, and then came back to bed for some more sleep. This day we watched the Souda bay wake up together (which is no punishment at all!)

After a lazy day we’re in the internet cafe now and plan to go eat in the east end of town, where the most taverna’s are, but it’s a bit further from our apartment. We’ll have to hang out a bit longer at one of the bars to let our food digest a bit before we walk back 😉