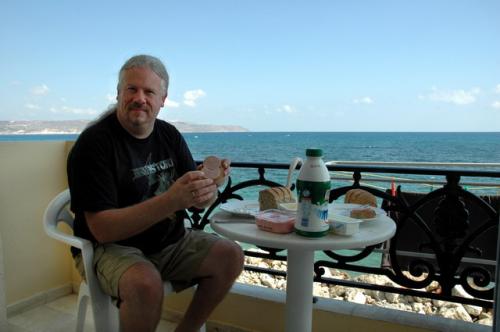 We’re back on Cretan soil and enjoying the beautiful view from our balcony! We had a good flight and here is the report of the first few days:

For us the vacation started on Sunday the 4th, because Nico had to work late shift on Sunday and we would be picked up at 3.30am – we didn’t go to bed at all, so it was more Sunday night late than Monday morning to us. The shuttle bus took us to Brussels in little over an hour, we could check in very early and had plenty of time to walk around and have a drink. Too much time actually, because when it was boarding time, it turned out that the plane had too much kerosine and some of it had to be pumped out, which took about an hour. I had a hard time keeping my eyes open, while we were waiting! With that hour delay we finally left Brussel around 8 o’clock and had a pleasant flight to Chania-airport, where we arrived at 12.20pm. Someone from Flisvos cars was waiting for us and drove us to Kalives in our “own” rental – that was nice, we could chat and focus on taking in the scenery again instead of trying to figure out what the route to Kalives was again. He brought us to the apartment and guess what, we don’t have one of the bottom studios but one of the apartments on the 2nd floor! We rushed to the balcony to check the view and even though it looked exactly like the pictures, it truly took our breath away for a moment! The sea is (for Kalives) very rough today (usually it’s very quiet) so that’s great to see as well. The sound of the waves is already great, but now there’s a thunderous sound as well when they break on the rocks. The view is wider than what we had in Almirida the last time, and we’re directly at the sea side, only a small road and some rocks away (10m maybe).

We laid down for a bit but couldn’t sleep, even though the only sleep I had was maybe 5 minutes on the airport and 10 on the plane. An hour later the owner Manolis came by to say hello and later on we walked to the center of Kalives where we had our first frappe and a Greek salad, hmmmmm:) There are several sea-side restaurants even before the plaza in the center and that’s not far, just a few minutes walk. We bought a few groceries and went back to the apartment to chill (read: sleep for Nico and writing this on the balcony-with-the-amazing-view for me). Around 7 we went to the office at the other side of town to pay for the car and apartment. We thought we could pay with the creditcard but for the apartments they prefered cash, because they had to give it to someone else. Luckily Nico got most of it from the bank machine, the rest we payed with our card.

Since we were already in the centre, we decided to go eat already. We picked Akrogiali where the rocky shore ends and the beach starts. They had some tables that were not behind the plastic wind screens, so we sat there and ordered the white housewine for me, a Mythos beer for Nico, pikilia (mixed starters plate) to share and both a chicken souvlaki – just like the first night in Almirida 🙂 And it was delicious!! Hands down the best Greek meal we ever had! When the sun set and we watched some planes land on Akrotiri across the bay and a few ships (one ferry) leave, all the memories of having dinners in Almirida came back and it slowly sank in we are back 🙂 After a while we went back to the apartment, sat on the balcony for a little bit, but went to bed early for a good night sleep. 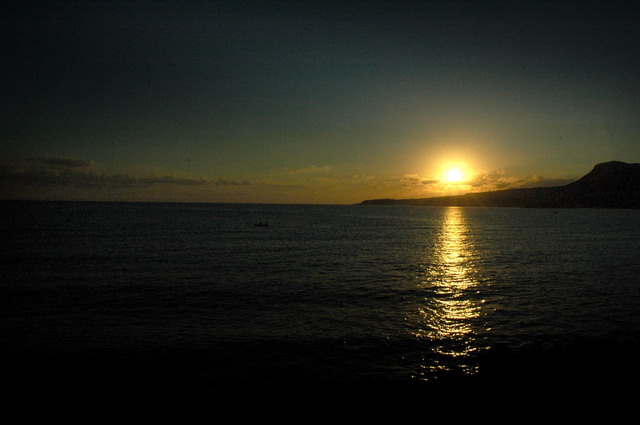 We were up fairly early and the sun had just gone up above the Drapanos peninsula on the right. What a view! We had breakfast on the balcony and went for a drive to Almirida, Plaka and Kambia, to see how that had changed. It was so cool to see it back! There were a lot of new houses and apartments and Almirida had become a lot more touristic. One big hotel that we saw and several more tavernas and shops. Almira apartments look totally different too, but the terrace was more a bar now and looked cool! We walked around and said hi to Sofia at the Flisvos office there, she was the one I had been emailing with. In the afternoon we went back to Kalives for groceries and siesta time. We stretched that siesta time out to around 8. We went to the closest taverna for dinner, Provlita. Ok, this maybe was the best meal ever. Fried zucchini, bekri meze (spicy pork in tomato sauce with carrots and pepper, on fries) and pork souvlaki. There were several stray cats there, we always love that. They didn’t get a lot from us though, the meal was too good. Afterwards we got a brandy (I think it was) and a slice of cake from the house 🙂 After a stroll along the shore we sat on the balcony a bit before going to bed. 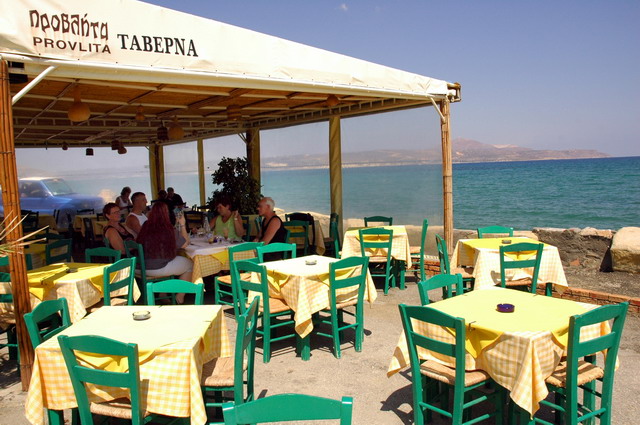 After breakfast we showered and Nico flooded half the place 😉 The bathroom is very small and apparently the level isn’t right, the water easily flows into the bedroom. I needed several towels to stop it, but it turned out there is so much pressure on the water that you don’t have to open the tap all the way (like at home) to get enough. So I tried that with my shower and it was fine, less flooding and one towel will do 🙂 The rest of the apartment is beautiful BTW. The entrance is on the gallery at the street side, you enter in the kitchen with a small kitchenette, a big table and sofa (extra beds). The second room is the bedroom, also tastefully decorated with blue furniture. There is that small bathroom and the double doors open to the balcony with the most gorgeous view you could possibly imagine.

Around noon our ex-neighbours Toon and Mia from back home paid us a visit! They have been going to Crete each year for probably around twenty years. The first two times we were on Crete, we went to the same place they always go, Kritzas Beach in Gournes. Each time they make a two or three day trip to the west part and so they came by with their friends Leny and Kees and we went to Provlita for frappe. 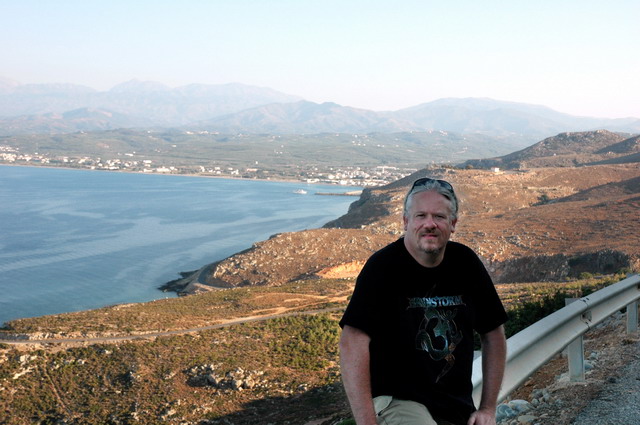 After they had left again we decided to go for a drive to the Rodopou peninsula. We took the new road all the way to Kolimbari, walked around the harbour and sat down at a beautiful terrace with comfortable chairs, had a salad, spaghetti and frappes and just relaxed for a while overlooking the sea and the beach. Then we drove onto the Rodopou peninsula, through the villages Rodopos and Afrata and we drove back to Kolimbari along the coast (with gorgeous views). Over the old road, through the villages, we drove back to Chania. Esp. Platanias and Agia Marina are so touristic, it was a colorful mix of tavernas and shops and totally crowded. Pffff wouldn’t want to spend my vacation there. When we got back to Kalives, I was so tired, but after a few hours we went out for dinner anyway. We went to a taverna at the beach west of town (closeby for us), but I didn’t like it there too much. It was more classy, there was a Greek band soundchecking for a gig later on that night and it just wasn’t our thing really. But the food was good, and Nico said his pork with garlic and peppers was the best meal so far. Honestly.

We went to sleep fairly early, but the night was a bit restless. Despite the airco (that I didn’t dare to turn on too hard) it was hot and we decided to try to just open the doors as well as the window on the street side, since we hadn’t seen any mosquitoes yet (I have no clue where they are, but I’m happy!) and that was very pleasant 🙂 We woke up early, sat outside a bit, were too tired still and laid down again… zzzzzzz! Ah, that’s vacation 🙂

So this will be a lazy day again, and time to go to the internet cafe in town. Before spending some time there, we walked to the other side of the village, up the hill above the beach where a lot of apartment buildings are. We got some awesome views on the whole village and coast. The crowded and pretty touristic town beach with several tavernas and bars, the rocky shore where our apartment is, and even a little bit of the west beach. Postcard pics! We walked down to the beach and first to the right to the little harbour, then followed the beach back to town. Had frappes and a salad at Manolis, but the frappes were not strong and cold enough. We also sat on a bench on the beach for a while, and now we are at the internet cafe (like most shops it was closed in the afternoon until 5.30pm). 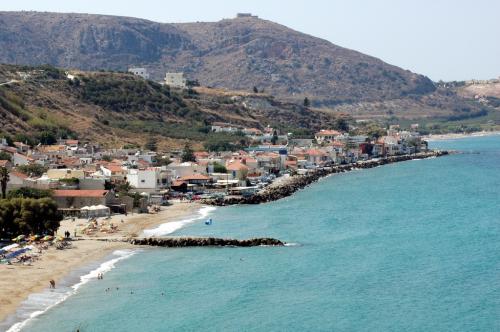 Our apartment: find the dark spot at about two-third of the rocky shore… that’s the huge Bougainvillea bush at the side of the complex!

5 Comments on “first days back on Crete! (Kalives, Kolimbari, Rodopou)”