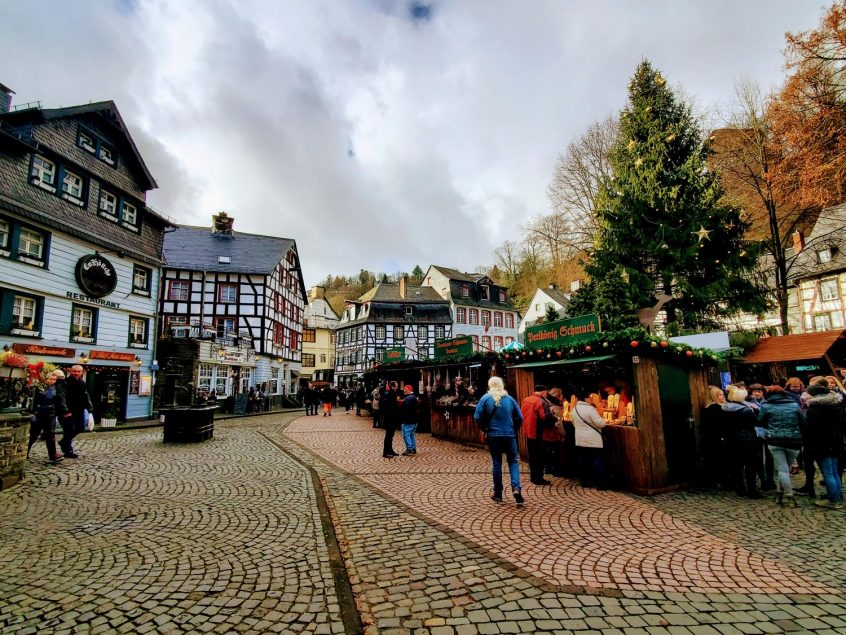 For years we had a small camper in a seasonal spot near Monschau. We would regularly walk through the forest to this romantic, old town with its narrow cobblestone streets and half-timbered houses. Like a fairytale! Now that we were going to drive from Aachen to Ahrweiler, it was the perfect day to include Monschau in our route!

On our way to Monschau we crossed the Siegfrieds Line (a.k.a. the Westwall) a few times. This was a German defensive line from the second world war. It was constructed along the western border of the German Empire, from the Rhine to Switzerland, and was about 630 km (390 miles) long! Still visible in a lot of places are the dragon’s teeth, four or five lines of concrete pyramidal anti-tank fortifications that are about 3-4 feet high.

Once we got to Monschau, we parked the car on one of the parking spots along the main road. There was a walkway down into the north end of town. We enjoyed walking through the narrow cobblestone streets again. On the market we visited the Christmas Market, #4! I enjoyed a glühwein (warm, spicy, mulled wine) of course! We also had coffee and cake in Cafe Kaulard, one of the beautiful cafes in the centre of town.

We continued to walk through the town. Monschau probably originates from the 12th century. It was an important centre for cloth manufacturers in the 18th century. Nowadays it is a tourist town as the cobblestone streets haven’t changed in ages and it has many well preserved old buildings and monuments. The most noticable is the Red House, once the home of cloth manufacturers family Schleibel, now a museum. It’s distinct look is also part of Monschau’s touristic logo, like you can see on the mug I’m holding in one of the pics on the Christmas market 🙂

We couldn’t stay too long though, after all this was only a quick visit on our way to Ahrweiler! To be continued…