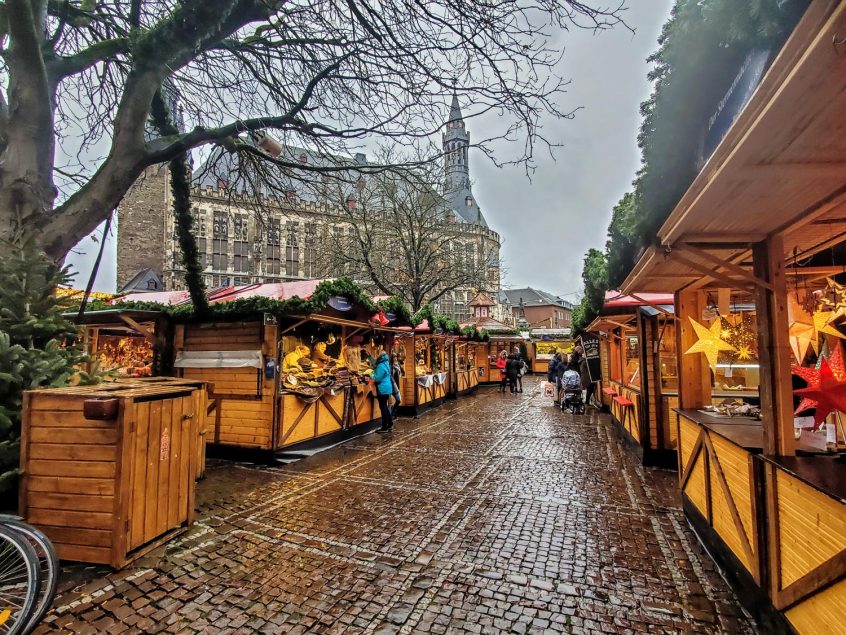 With Christmas markets being our theme on this trip, we had to include the beautiful historic town of Aachen. The market is spread out over a few city squares around the medieval City Hall and Cathedral. Nico has worked in the Aachen hospital for ten years and is still in touch with a group of former coworkers. So this was the perfect chance to get together with them!

The centre of Aachen is another one of those city centres where you need an environmental sticker. Remember how we weren’t able to obtain one when we were in Bottrop? Since we only had to drive straight to our apartment in Aachen, park in the parkade for the duration of our stay and drive straight out, we decided to not even risk getting the same runaround again. Being situated right in the centre of town meant that we were able to walk everywhere!

Aachen is a vibrant city with a big pedestrian area for shopping and beautiful city squares we’d be visiting for Christmas market #3. It is also a very old city. A Roman settlement and spa at first and one of the most important cities in Europe, being so close to Holland and Belgium. It was the residence of emperor Charlemagne in the early middle ages and thirty kings were crowned here until the 16th century. Many of these medieval churches and the city hall were damaged in the second world war (the cathedral not so much), but restored right after.

Our apartment is in the east side of the city centre, near the Saint Adalbert Church, Aachen’s second oldest church, consecrated in 1005. It’s steps away from the big new mall Aquis Plaza and the pedestrian shopping area. To the west of this pedestrian area is the old centre with the city’s oldest church, the Cathedral (800) and the City Hall (1330).

After a busy day we arrived in Aachen well in time for our appointment with Nico’s former coworkers. There was some time to settle in the apartment after our check in. We loved everything about this stay. Dom Apartments is only four years old, so the room was modern, bright, clean and very comfy. All rooms have a view, you can see the Saint Adalbert Church on the left, parts of Aquis Plaza and to the right you can see the towers of the old City Hall stick out! It was maybe a ten to fifteen minute walk to the City Hall and Cathedral where the Christmas market was. The bistro, Sapperlot!, on the main floor is part of the same company and offers a delicious breakfast, though not so cheap.

On the Christmas market we met some of Nico’s coworkers and had a drink at the Tijuana bar. We walked over the beautiful market for a while, where we ran into an old friend, Gerrie and his girlfriend Sonja. The look on his face was priceless! At the Goldener Schwan we met more former coworkers for a supper on the third floor of this beautiful old building. This has been a restaurant since the 15th century!! Our group of ten spent hours drinking, eating, laughing – no, howling until our cheeks kept hurting! Waitress Rebecca was hilarious too! It’s amazing how tight this group still is after so many (fifteen) years. Nico’s highlight of the whole trip 🙂

After a good night’s sleep, a good shower and good breakfast in Sapperlot!, we put on our rain gear and explored the fairly new (2015) Aquis Plaza. We also walked down Adalbert Street, the pedestrian area with shops.

There was some more time to chill at the apartment, before meeting up with friends Bert and later Haki on the Christmas market. Again we walked around on the market, admired beautiful merchandise and ate some bratwurst and pancakes. We got tired of the rain and had some drinks at the Goldener Schwan again. Mmmmmmm more glühwein (hot, spicy, mulled wine)!

We had a blast walking around in Aachen and no rain could change that! We just donned the rain gear to keep us dry and warm! Good call Nico, to not only bring a warm coat, but also our waterproof rain coats.

The next day we were ready to move to our next little adventure in this trip (Monschau). But when we went to get the car from the Stiftstrasse Parkade, we noticed that the hood got damaged. There was a bulkhead so low, that some kind of detail (was it a bolt?) had scratched and dented the hood when Nico parked the car. When we gave the car back at the end of the trip, we had to pay around 700 euro for the damage. After the trip, we contacted World Travel Protection, our insurance company through our Capitol One credit card, and a few weeks later we were reimbursed without any issue! Fantastic!