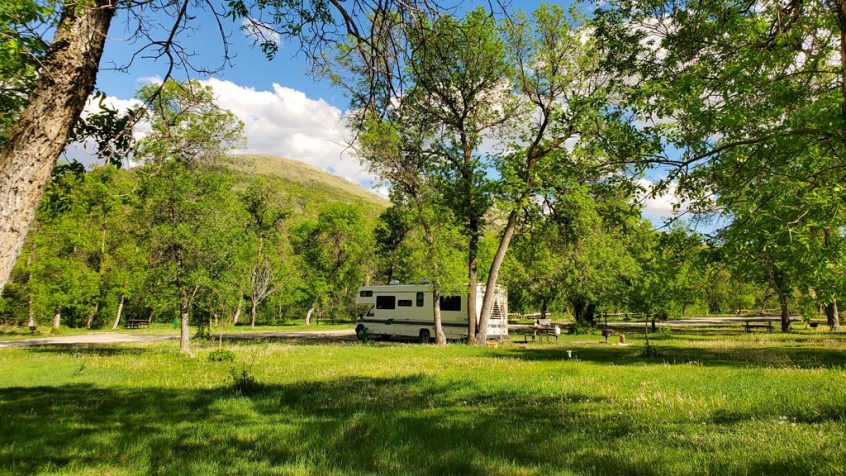 Finally time to start the 2021 camping season! We started close by, our home base of provincial parks if you will, Buffalo Pound Provincial Park. It’s only an hour drive to the north west for us, so we’ve been here many times! We love the scenery and how the campgrounds are situated in the coulees of this 35 km long prairie lake. Esp. on the Maple Vale campground we enjoy being tucked in between the hills, but it’s still only a short stroll from the lake. Buffalo Pound was formed around 10,000 years ago from glaciation and is part of the Qu’Appelle river system.

We picked a record-breaking hot day for many communities in Saskatchewan to go, it was a whopping 36°C! Way too hot, and we had left too much of the packing to the last minute. We got to the campground around 4pm and were already tired, so we didn’t do much anymore.

It was a little bit better the next day, but still hot. We continued setting up, walked to the store for a few things we forgot and to get a soft serve ice cream! In the afternoon I prepared some items for a BBQ supper for 6 as our friends, the Bos family, would be joining us in the neighbouring site and we said we’d take care of supper that night. It was also Marga’s birthday, so we also celebrated that around the fire that night.

Lots of naps, reading and visits

Most of the weekend was spent with lazy naps, reading, the odd short walk, meals together and drinks by the fire. Each day was a little bit less warm luckily!

On Sunday our Moose Jaw friends, Gord and Lorraine, came for a visit with their grandson Rhone. They also brought Buster, the cat that has often been at Maple Vale, camping! It was extra special this time, as Buster had recently been missing for two months and I had a hand at finding him in Regina, 75 km from his home!! I still can’t wrap my head around that! We don’t know how the heck he ended up all the way in Regina, but he had been around for a while when someone took him in, tried to find his owners, two of my friends shared that post and I saw it and showed Lorraine. Bingo! WOW. That was an emotional day. Anyway, it was extra special to see Buster again (this was the Facebook posts about their reunion)!!

One little hike for the view over Buffalo Pound!

On our last full day, after the Bos family had left, I finally had a bit of energy again to walk around the campground some more, to the lake past the store and up on the hill near Shady Lane for the amazing view over Buffalo Pound! In the evening we cleaned up most of our stuff already. Good thing, as it was raining a bit in the morning. All in all a good start of the camping season!