The Centre Block of Cypress Hills isn’t new to us, we’ve camped there several times and also stayed at The Resort a few times. I LOVE pine trees and these lodgepole pines are something else. It is also the highest point between the Rockies and the Labrador peninsula. Like Grasslands, the park is a dark sky preserve and has an observatory that we visited for the first time. The biggest difference with this trip was that Gord and Lorraine were there too, so we spent a lot of time together and went to a few places by car, that we normally couldn’t get to. 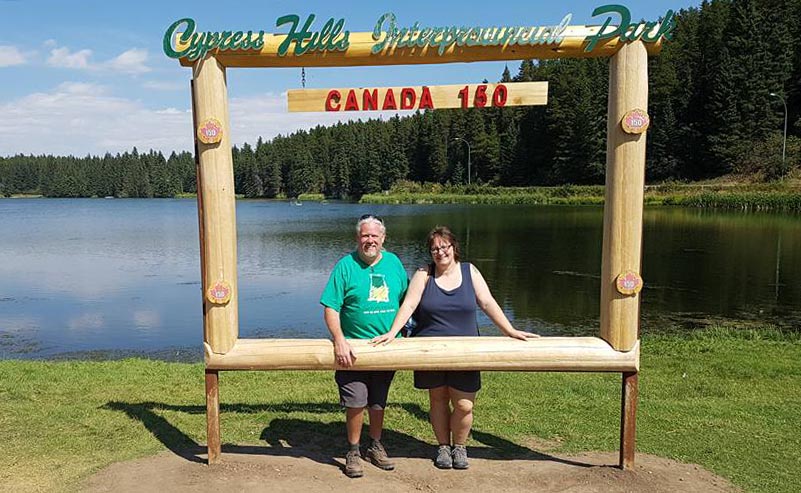 We had a very pretty drive to the park, coming from Grasslands this time. A lot of prairie and we crossed the rugged Frenchman Valley five (!) times. One time even during the much hyped (80%) solar eclipse, but all we noticed was that a light cloud cover felt like a heavy one. We had plans to stop in Eastend and maybe visit Scotty the T-Rex, but we already stopped and had lunch in Shaunavon instead. It must’ve been around 3.30pm that we arrived at Cypress Hills. After check-in we went to site 67 on Terrace. The slight slope mentioned in the description turned out to be a slope so bad that we couldn’t even begin to correct it a bit with the blocks we have. You can’t jack it up like a trailer. We didn’t want to sleep with our heads that far down, so we went back to the office to see if there were any alternatives. They wrote down some sites we could look at and around 5pm our six nights were rebooked to four nights Rainbow 29 and two nights Terrace 16. Better! The Rainbow site wasn’t big nor private, but it was enough and you could look right into the forest and the Woodlands Trail!

We saw at least four moose on that trail and two on the Whispering Pines Trail. And twice we missed moose walking by our site in the early morning. Nico also saw some cows there one day, they must’ve broken INto the park :O We loved being in the pine forest and talking to many people about our kitties. We also got together with Gord and Lorraine every day, for a meal or walk or drinks. On Tuesday, Gord and Lorraine took us to the Observatory open house and that was neat. We watched some videos, there was a talk about constellations that were pointed out in the sky with a laser and in the dome we could look at some nebulae and such through a telescope. They’d be very busy in the following days with a lot of stargazing geeks attending the annual Saskatchewan Summer Star Party! Thursday was the only cloudy day with a few drops of rain, we had fantastic summer weather otherwise!

We also kept our eyes on the registration page to see if we could get a better site for the last two nights. Things change all the time and we were able to change our reservation to Warlodge 72 and add a third night… right next to Gord and Lorraine! Now this was much easier for combining doing our own thing with popping by for a bit or getting together for the evening. The site was partially open, but still had pine trees and was HUGE. Certainly more privacy! We still saw moose (probably the same young bull) on the other side of the campground and near the Twisted Tree Trail. Amazing! Nico and Gord went fishing one night and Leilah and Matt came to stay with Gord and Lorraine for a night. Should’ve been two, but a lot of car troubles marked their trip 🙁 We planned to leave on Monday, but when I woke up at 9am, I checked if the site was available for another night and poked Nico. Of course it didn’t take any trouble to convince Nico! I checked with my manager, postponed my dentist appointment and Nico went to the office to add one last night (he was going to Maple Creek with Gord). We just couldn’t tear ourselves away from this awesome place and had one more hot and relaxing day! Before driving home together on Tuesday, the four of us concluded our camping trip with a great breakfast at the Resort!