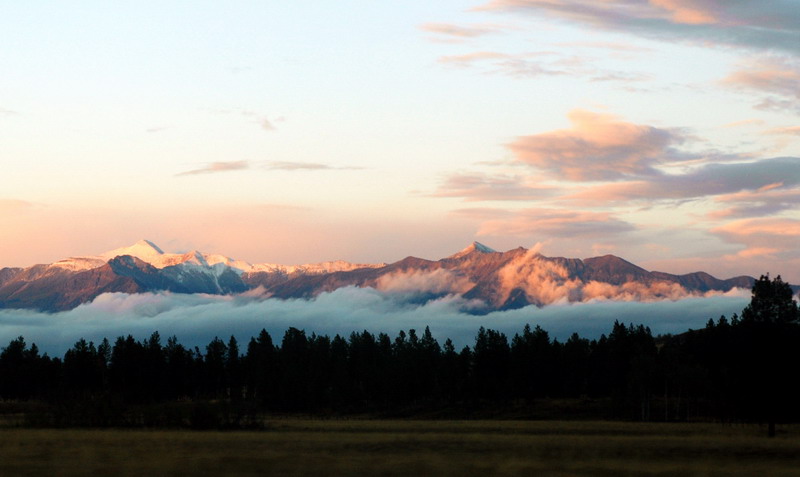 A long drive through the mountains and along big lakes… a beautiful drive! But including a few small breaks, waiting time at the ferry, losing one hour going back to the mountain time zone and a great visit in Creston, it took us from 9.40am until 8.30pm to get from Nakusp to Kimberley. 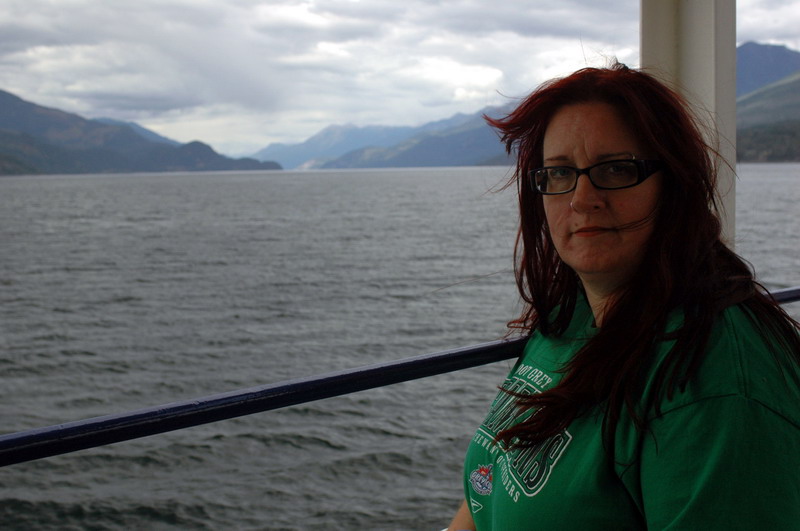 The weather was mostly cloudy, so we didn’t get the best of pictures, but the views were still great. In Kaslo we took a small break and saw the sternwheeler downtown. We didn’t stay long because we hoped to get on the 12.20pm ferry in Balfour, but we didn’t make it. So we spent some time on the ferry landing (of all places I found a dress there that I was looking for) and got on the 1.10pm one. That was the big Osprey 2000 and we loved the views on the Kootenay Lake! 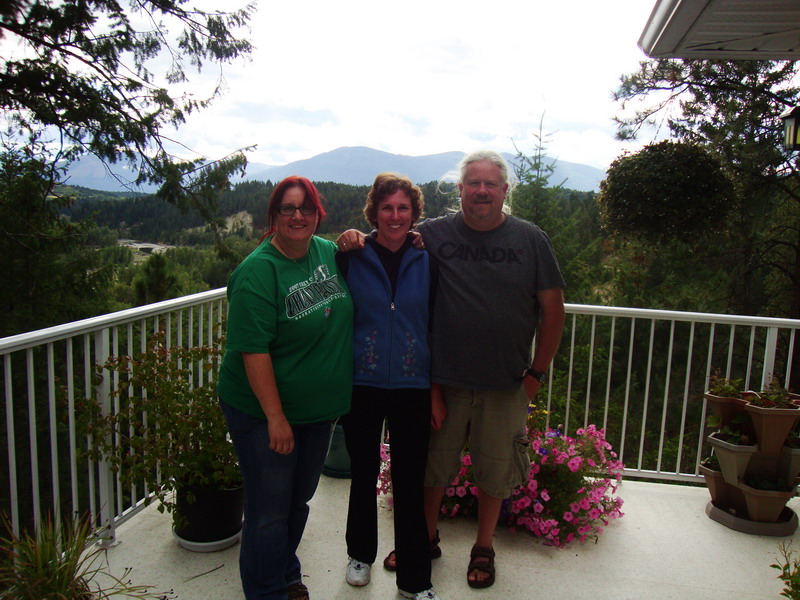 Around 4pm we were in Creston/Erickson where we visited my online friend Sophia and her husband Murray (and last but not least their 4 cats :)). I know her from a Dutch forum about Canada (vacation stuff mostly). They live in a gorgeous house on a hill by a canyon with a spectacular view! It was great meeting them and they fed us yummy sandwiches and such, so we didn’t have to worry about supper anymore later! Thanks for the hospitality guys, we had a great time!!

It took us 2 more hours to get to Kimberley. This included turning for a ‘bear’ sighting… but it was a wooden bear in someone’s yard LOL. We did see a beautiful big elk bull crossing the street though! When we got closer to Kimberley, we could see peaks of the Rockies above the clouds in the orange-red light of the sunset! On the campground we found our spot (the sites are less spacious and private then I had expected), but forgot to ask about the internet option (didn’t find any network at the site). 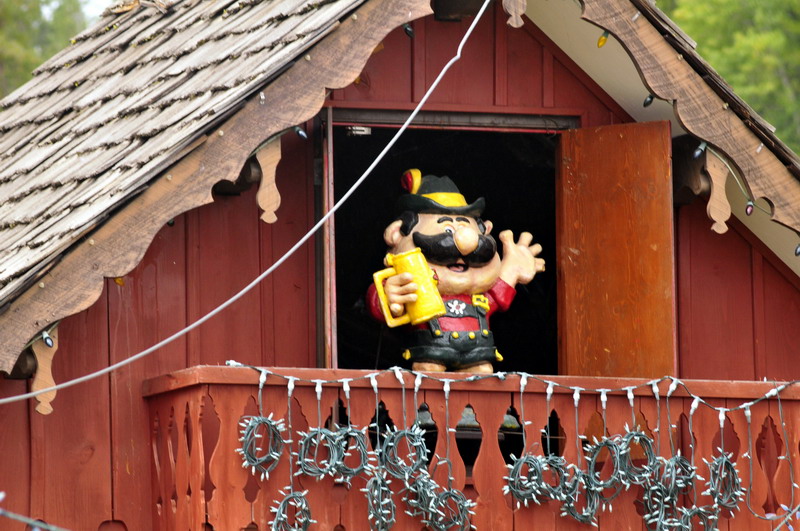 We chose Kimberley, because we wanted to visit another Dutch couple, Anja and Theo, who came to Canada a year and a half ago and took over the Alpenglow bed & breakfast. Like Chantal and Suus, we know them from the CBB, a forum for Dutch immigrants to Canada. Kimberley has a beautiful campground, but it’s about 8 km away from the B&B, and Anja generously offered to come pick us up! She took us to Kimberley’s Bavaria-style downtown, the Platzl, where shops look German and you’re greeted by jodel-music 😉 We hit the shops and after that we went to the B&B where we met Theo and chatted for a while. We were supposed to go back to the cats for some hours before our dinner plans together, but we had such a good time that we just deciced to stay 🙂 Another couple vacationing from Holland, Herman and Liesbeth, joined us later in the afternoon, we all went for a little walk and for a luxurous dinner at the Bavarian restaurant across the street. What a great last vacation day – Theo and Anja, thanks so much for a wonderful day!! It was after 9 when Theo brought us back to the campground and on the way he and Nico were pretty sure they saw a moose in the ditch! We turned, but it was gone 🙁 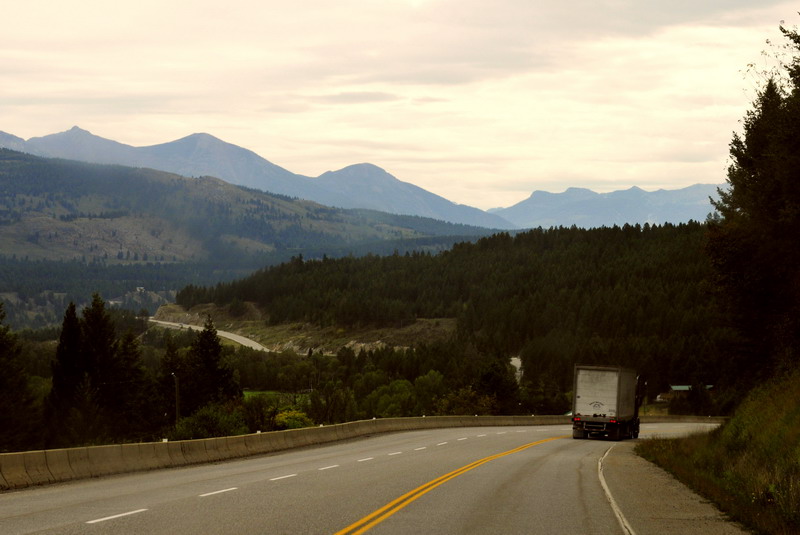 Time to go home (in 2 days) 🙁 We didn’t really leave early, we phoned Amalia first for her birthday and we went to the Overwaitea supermarket first to get a few Dutch things (Anja told us about that). We had a good drive through the Rockies (Crowsnest Pass), but we didn’t feel like stopping at sights anymore. We wanted to see how far we could get today. In Lethbridge we visited the Dutch shop there, the Wooden Shoe. We keep saying we don’t really miss much, but we left the store with $200 worth of groceries LOL! Some specific snacks, biscuits, pudding, porridge, liquorice, nasi spices etc etc! And we again visited more Dutch people (the 6th family, not bad haha), Tontje and Joyce moved to Lethbridge 5 months ago (I also know Tontje from Canada forums). It was again great meeting them, but we needed to keep going so we didn’t stay very long. It was already getting late though, so we put up camp not much further in Taber. Tontje had sent us to a Chinese restaurant there and we are now on the very lovely municipal campground on the shore of the Oldman river.

Home! After another long drive on the prairie and lunch in Swift Current (Husky as usual) we got home around 5pm. Soooo tired and I have to work tomorrow, so I better turn in early!

We had a great vacation, so many new impressions that it felt longer than 2 weeks and we’re tired from all the driving. We’ve seen amazing scenery and it was fun to meet in person with fellow Dutch immigrants Chantal and Suus, Petra (I already knew her from way back), Tontje and Joyce, Sophia (and Murray) and esp. Anja and Theo, and John and Diana! Thanks for all the hospitality, fun times, food, drinks, rides, showers and laundry!! 😉 Our doors are open if you ever end up in Regina, but it’s not much to look at compared to the amazingly beautiful British Columbia! But for now it’s home (who knows if we ever end up in BC hehe) and it’s good to be back 🙂