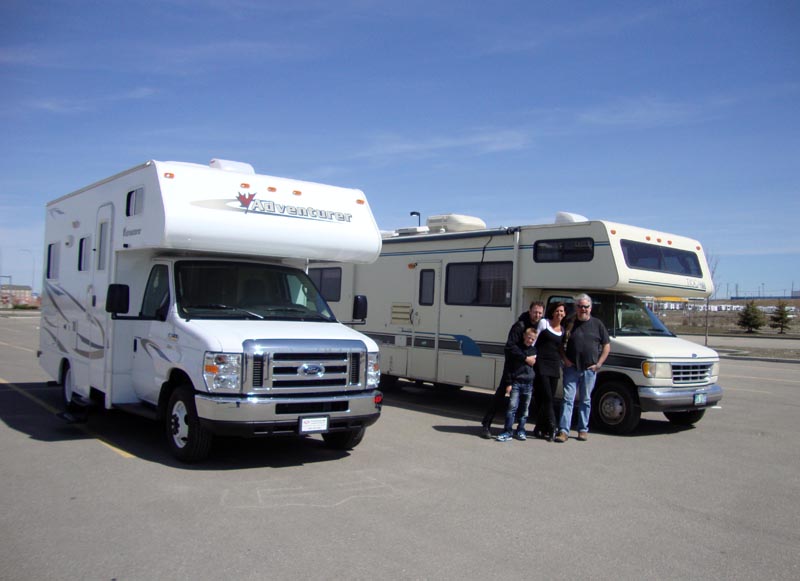 For our 5th visit to the Banff-Jasper area (and to meet our Dutch friends Els, Maurice and their son Brian), we left Regina at 1.45pm (Nico came out of nightshift and had to sleep some hours). We stopped in Swift Current for gas and propane, which took some time as we had to find that first. Turned out the Co-Op had it on the north side of the highway, but we didn’t see it until we were already crossing the road to go to Husky on the south side. After that fairly long break, we kept going until sunset and made it as far as Brooks, Alberta! In the afternoon we got a text from Els that they arrived in Calgary (flew in with a direct KLM flight from Amsterdam). We’re close! 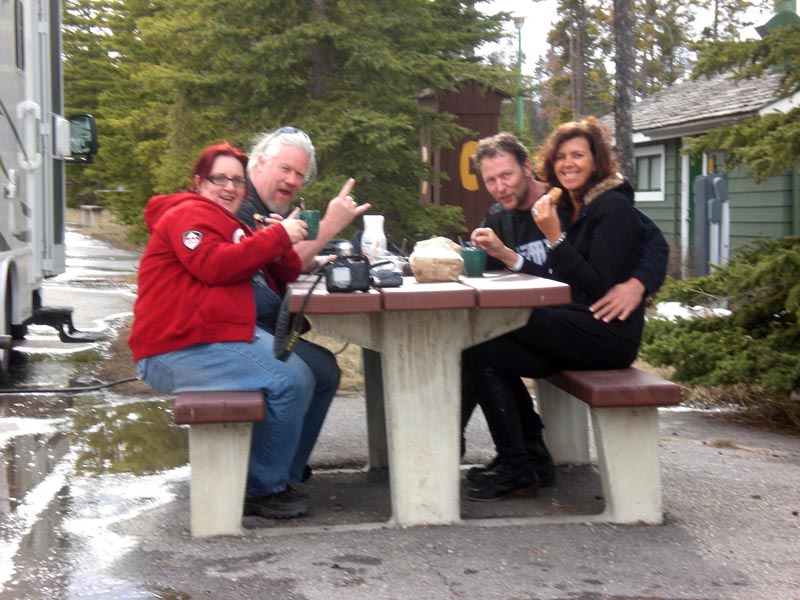 We only had a few hours to go to Airdrie, where we’d be meeting Els, Maurice and Brian, so we didn’t have to rush. We stayed in touch while we were on our way and they were getting their rental motorhome from Fraserway. We would see each other at the Walmart parking lot and we got there at the same time, around noon, such timing! :)) After a great reunion after 3 years, admiring each other’s motorhomes and our cats and some shopping in the Walmart, we drove to Banff over the 1A. That was a first for us (we had always taken the 1 or the 22X underneath Calgary) and we enjoyed the different views from the other side of the valley and through the forest. Near Canmore we saw a lot of bighorn sheep! In Canmore we joined the 1 again and soon after we entered Banff National Park where our friends had to get their National Parks Pass (ours from last year is still valid). On the Tunnel Mountain Campground we asked for sites near a shelter, so we could BBQ in there (it was still wintery cold). We (except Nico) first took the bus to town to check out the stores. When we got back around 8, Maurice got a fire going in the stove in the shelter, we admired the elk that walked by on the campground, Nico barbecued and we had a great first night together in there!

We took our time for breakfast, Maurice made us eggs, bacon and hashbrowns 🙂 Then we left the snowy campground to go to Lake Louise. We took the Bow Valley Parkway and stopped at the Johnston Canyon. There still was a lot of snow and ice in there, so most of the path was pretty slippery! We made it as far as the first falls though and it was very pretty in this winter setting. On our way up, we suddenly heard some growling and all stopped dead in our tracks right away.. then we didn’t see or hear anything! Did we hear a bear or cougar?? Was it a sound from further away (but where, in the canyon?)? Nobody was sure what we heard, so we continued. When we came back another woman told us in the same area she 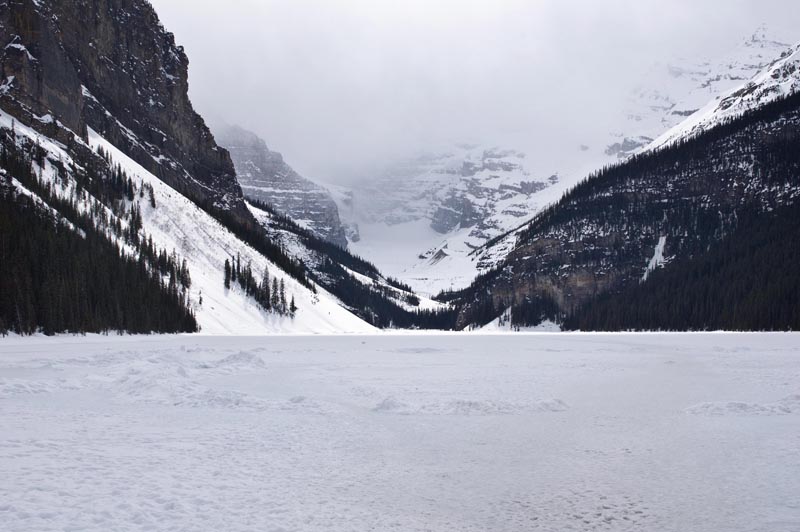 thought she saw a bear or heard something… what?? Nico doesn’t believe it, but I think there must’ve been something! As the giftshop/coffeecorner was still closed, we continued our journey on the beautiful Bow Valley Parkway. We wanted to stop for a picnic at the Storm Mountain viewpoint, but it was still closed, so we decided to get coffee and a snack in the bakery in Lake Louise (Village). After that break and a little snow storm, we went to the visitor centre and to Lake Louise itself. It looked just like it had all winter, still frozen and piles of snow! We also checked out the Chateau and then went back to the valley to check in on the campground. Only part of it was open (again because there was a lot of snow) but we found a double spot for the both of us. Time to BBQ again 🙂 And shower, and sit together for the rest of the night. 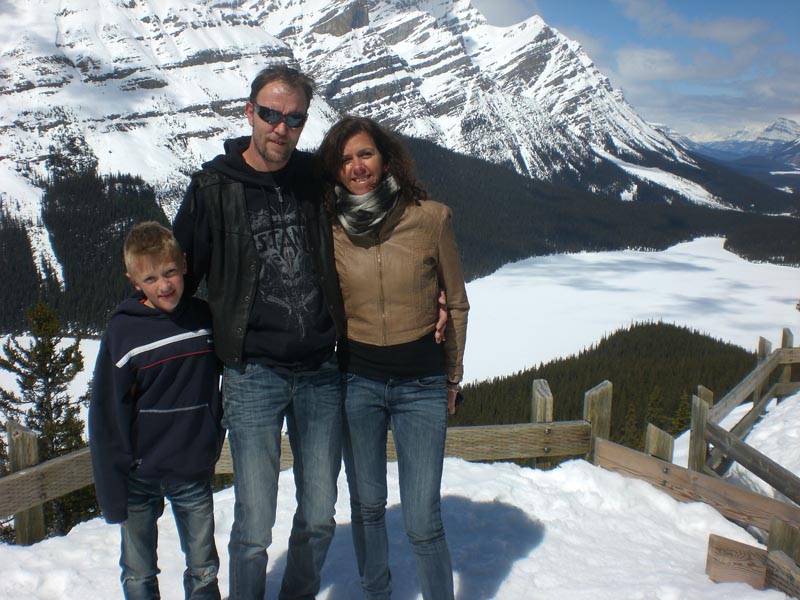 Icefields Parkway time!! Luckily the sky looked much brighter today, a mix of sun and clouds. After getting gas, we took the famous 93 up to Jasper, around 10am. First stop was my favourite spot, Bow Lake. I had suggested to have breakfast on the pullout on the side of the lake, but once again it was closed (not cleared of snow). We could turn into the access road to the Num-Ti-Jah lodge and park on that parking lot, but weren’t able to get close to the lake there as someone was still shoveling the huge amount of snow that was still there. After having breakfast together on the parking lot (Maurice made pancakes), we stopped a few kms further to get to the Peyto Lake viewpoint. We had wanted to drive up the road to the parking lot for buses and the handicapped, but no such luck. We had to walk through the snow, a narrow trail was made over the road we had planned to take (so not the normal trail in the summer). But it was worth the effort as the view over a white Peyto Lake and very clear valley was fantastic again! Everything looked fantastic on the Icefields Parkway, esp with so much snow on the mountains and the great weather! It was our 5th visit and 8th time driving this Parkway and the scenic route possibly looked more beautiful then ever! After lunch at the Crossing (Saskatchewan Crossing), we briefly stopped at the viewpoint after the Big Bend and visited the Icefields Centre at the Athabasca Glacier. After that we stopped once more to visit the Athabasca Falls. There wasn’t much water yet, the falls were partly frozen and we could only get to the first viewpoint and not to the other side (still closed) 🙁 We got to the Wapiti winter camping around 6.30pm. See how only 230km and just a handful of the sites along the way, take you a whole day! The campground was initially a disappointment for me, because I had expected that a part of the regular campground (in the forest) would be open, but it was only an open parkinglot, with electric hookups and a shower building though. But all in all the surrounding scenery is still awesome of course and we did have a good time there. In the evening we sat inside anyway and we were still so full from lunch that we only had smokies on a bun (took us a while to convince Brian that smokies are smoked sausages and we weren’t going to eat our Smokey ;)) 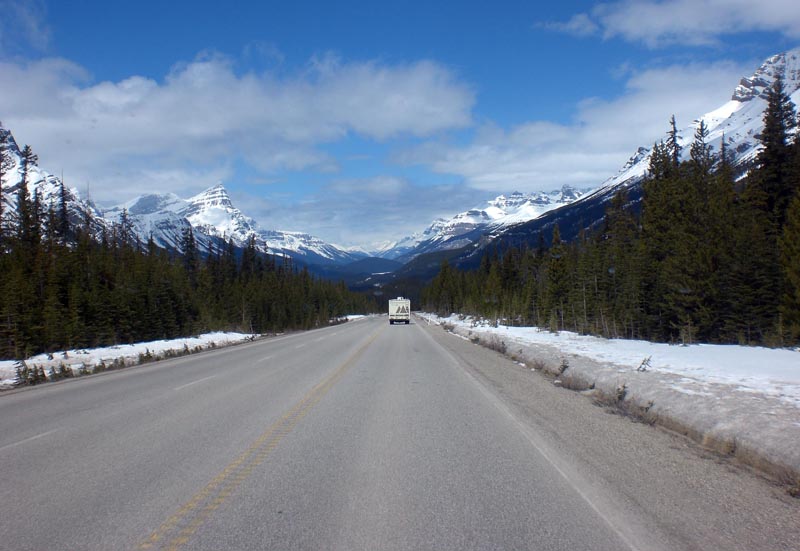 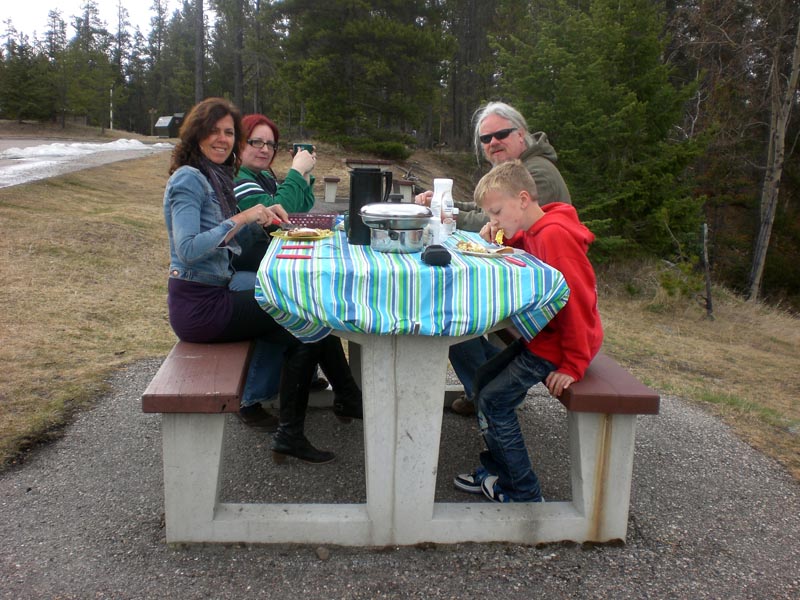 No rush today, so we could sleep in a little and have a leisurely breakfast on one of the picnic tables around the parking lot, erm I mean campground. Our chef Maurice prepared a hot meal again with eggs, bacon and hashbrowns 🙂 Then we checked out Jasper, did some shopping and had a coffee. We chilled for a bit on the campground 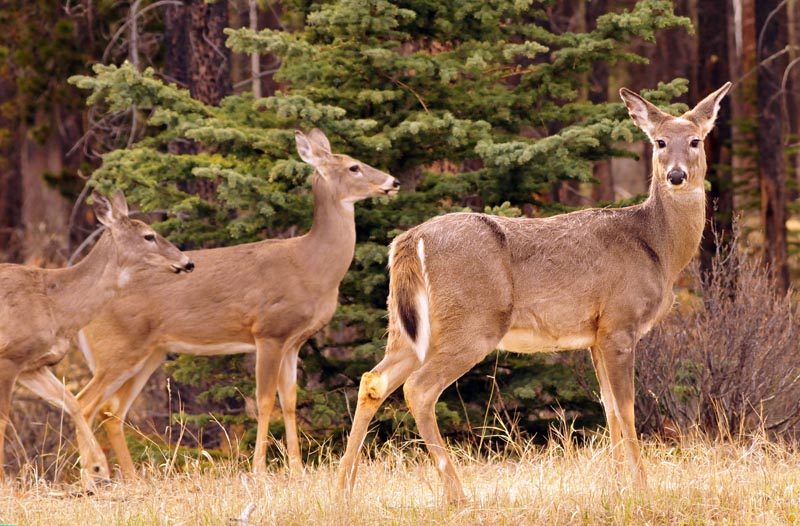 before heading back to Jasper for supper (Maurice and Els took us out to a restaurant for our last evening together) and had a great meal at “Somewhere Else” 🙂 Then we took the Maligne Lake Road to Medicine Lake and Maligne Lake, hopefully to see some wildlife. It was a beautiful drive as always, but esp. at Maligne Lake there was still so much snow that you could hardly get to the lake. I went as far as the deck of the restaurant that was still closed. The lake was still frozen as well. We didn’t stay long and drove back to Jasper. We didn’t see any wildlife until we were back on the 16 where we saw a coyote and lots of elk. We ended the evening with some drinks at the Loonens’ motorhome. 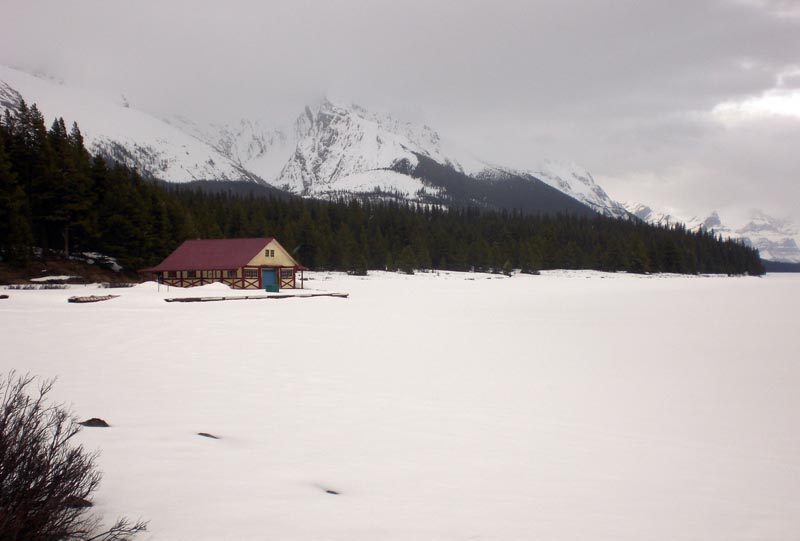 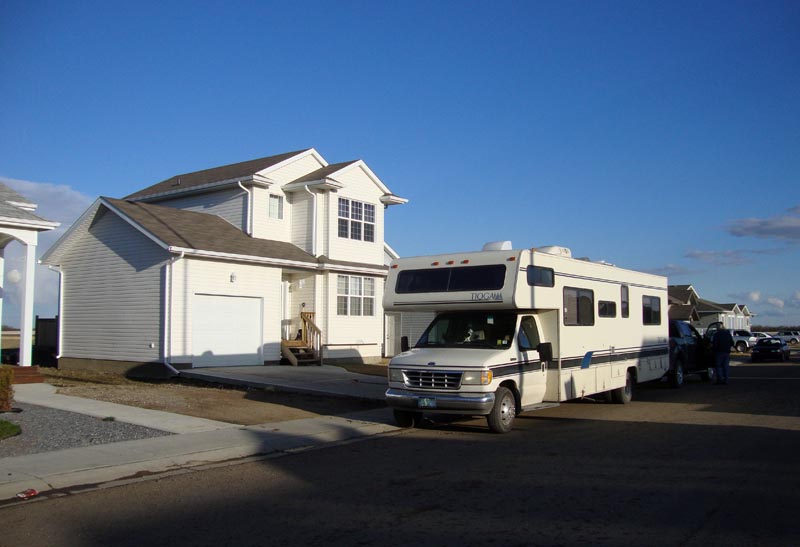 Unfortunately it was already time to say goodbye to Els, Maurice and Brian. It has been so good to see them again and it was too short, so it was tough, but at least we’ll see each other again in September. We drove to the 16 and literally split up there, they went left to B.C. and we turned right to Edmonton. Our first stop was Edmonton where we visited Ben’s Meat & Deli for some Dutch goodies (way too much liquorice and sweets, but also frikandellen, bamischijven (they called them Indonesian bami pucks) and croquettes)! Then we briefly visited Sebastiaan (CBB) and little Lars (Mariska was at work) in Sherwood Park, just east of Edmonton. We couldn’t stay long, as we wanted to be in Lloydminster at supper time. We got there at 7pm, it was good to see Mark again (who lived with us for 4 months a year ago) and we had supper at a Chinese buffet. Yummy!! Back at his place we chatted a bit, watched TV, surfed the net, and went to sleep in our motorhome (in front of the house) in time. 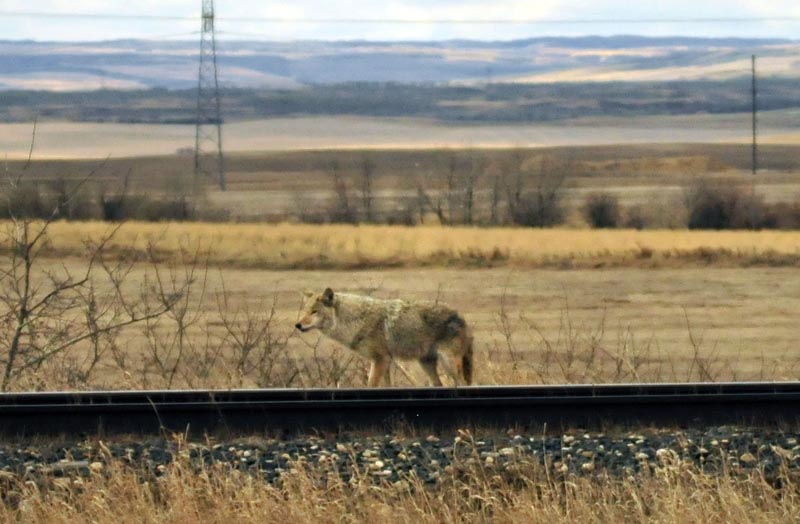 Time for the last part to Regina. It was still pretty long and tiring. We saw a coyote outside of the Battlefields, took a break in a field near Maymont and stopped in Dundurn (south of Saskatoon) for a late lunch/early supper. Around 6pm we were finally home again!

One Comment on “To the Rockies with Els, Maurice and Brian!!”