update from the last days: 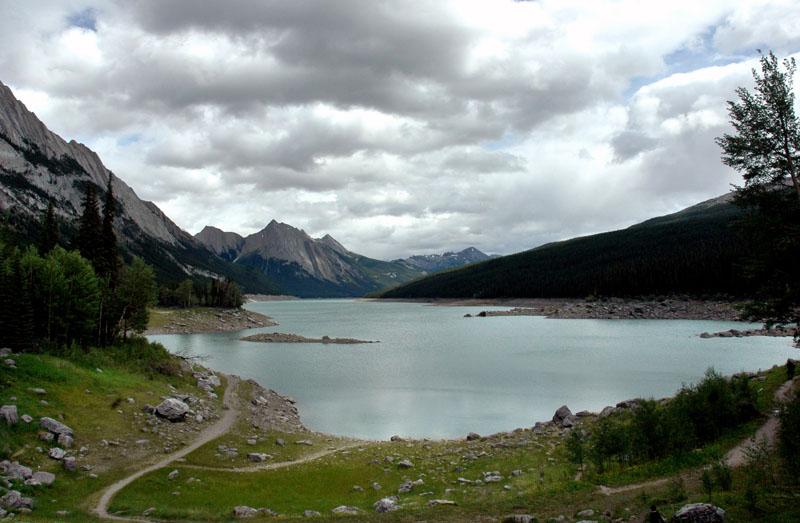 After the last update we spent some time in Jasper, bought some native art at the Our Native Land store next to the laundry place. We always buy something there, but it’s tough to choose from so much great stuff. We ended up spending a bit more and took two things home, a limited print from Sue Coleman and a small shield with leather, a medicine bag, arrows and feathers attached. Back at the campground we had to change to an unserviced spot (when we made our reservations there was no electric site available anymore for this one night, and the campsite was completely full). It was a beautiful spot away from the Icefields Parkway, in a mixed spruce and birch forest. The others came to our spot to BBQ. Unfortunately we got some thundershowers (we sat underneath the awning), but an elk herd passed by our site which of course made up for the weather 🙂 No big bull among them, but still impressive animals. 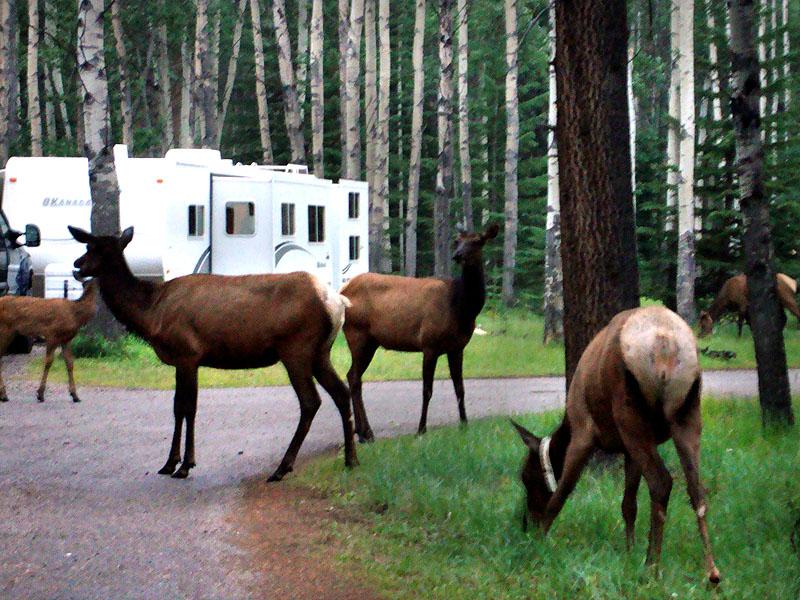 The mother of all days, as Nico calls it. On the agenda for today: the Maligne Lake Road incl. the Maligne Canyon, Medicine Lake and Maligne Lake itself. We drove to the Sixth Bridge of the canyon, where Ton and his family left their motorhome, then we took them to the beginning of the trail where the restaurant is. They hiked the trail through the canyon back to their own motorhome and joined us again after that. In the meantime we (dad, Amalia, Nico and I) walked to the First Bridge and had lunch in the restaurant. We all continued on the scenic Maligne Lake Road, slowly and watching for wildlife. We stopped at Medicine Lake to enjoy the views over the fairly full lake (which was fuller than we every saw it in the fall) as well as some deer that were right by the parking lot. At the end of the road we spent some time at Maligne Lake and Ton and Rita invited us all for supper at the restaurant there, because both their birthdays were coming up, (they had only lunch dishes, but enough to fill the stomach with :)). After the meal a little wolverine was trying to eat a plastic bag outside, near a BBQ, so Ton distracted the wolverine so Nico could get rid of that plastic. We moved to the 2nd parking lot and spent some time there, because we wanted to drive back at dusk. Just when I wanted to go inside the motor home again, a deer showed up close by and we stayed to watch it and make pics, from only a few meters away. So cute!
Around 8.30 we decided to drive back, although it wasn’t getting dark yet (it would be light until past 10, but we didn’t want to be back that late). We didn’t see any animals for a long time, and we felt a bit disappointed, until we at least saw an elk along the road. At the last part we hoped to maybe see a coyote or something, and we got our hopes up when we saw a car had stopped at the side of the road. Then we saw what they saw… a black bear close to the road!! Yeehaw, finally!! But that wasn’t all. When we got close to Jasper again, we saw cars along the 16 where we’ve seen bighorn sheep before. This time they were high up on the cliffs, we saw a male with the actual big horns, females and some little ones! And at the exit to Jasper we saw an elk herd crossing the street. Wow, so many animals at the end of the trip! And that is why Nico calls this day the mother of all days 🙂 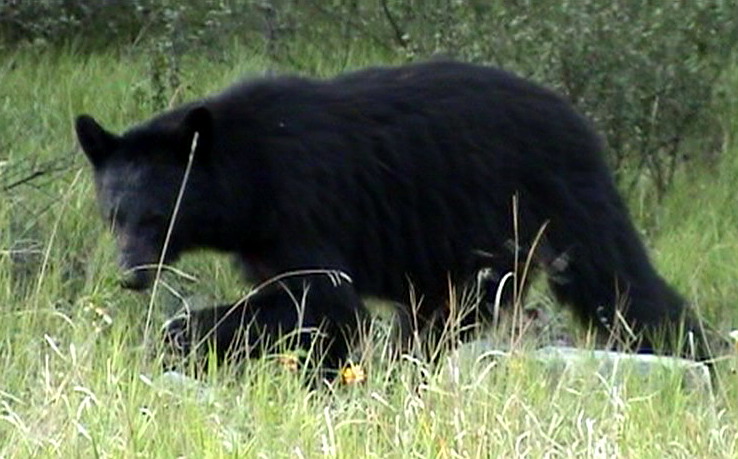 It was time to temporarily say goodbye to Rita, Ton, Martijn and Sander. They continued to B.C. with their motorhome and we turned around to drive back to Regina (in 3 days). We left around 11 and stopped at the Athabasca Falls (never seen the falls this ferocious!!) as we had skipped them on our way up. We didn’t stop elsewhere on the Icefields Parkway until Saskatchewan Crossing where we had lunch again. We continued to about 10 km east of Canmore, where we stayed one night on the Bow Valley Campground in the Bow Valley Provincial Park. Beautifully located in the forest on the slopes of the Bow River, but I had hoped for slightly cleaner washrooms (the whole in the ground things and not very clean) or free showers if you already pay $34 a night for an electric site (w/water). Maybe we are spoiled with the excellent provincial campgrounds in Saskatchewan (they charge a park fee which Alberta doesn’t, but only $22 a night and they typically have better washrooms/showers). 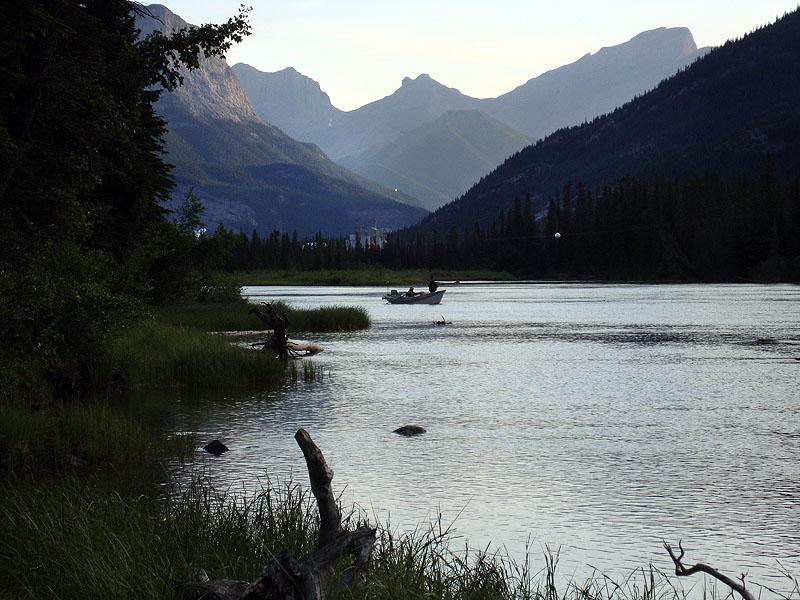 We intended to drive to Maple Creek, but as we left before 9, we figured we could at least make it to Swift Current. But once we were on the prairie, where driving is like a 1000 times more relaxing than in the mountains, we made so much progress and Nico was feeling so fit, that we ended up driving all the way home!! We arrived in Regina before 9pm – 840 km on one day 🙂 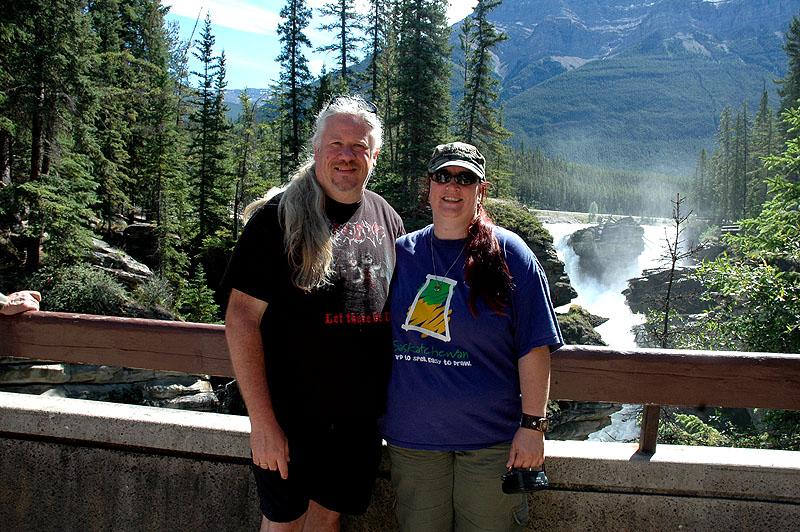 So now it’s Friday and we’re relaxing at home with dad and Amalia. They’ve been troopers camping in the motorhome, but are glad to sleep in a decent bed again. Nico is working nightshift this weekend, but will be off again next week (I will work mornings), so we can make some daytrips and see more stuff in Regina then. Next week Saturday my brother and his family will join us here in Regina for their last few days in Canada. To be continued!

And this weekend both Ton and Rita are celebrating their birthdays, so HAPPY BIRTHDAY to them!!!