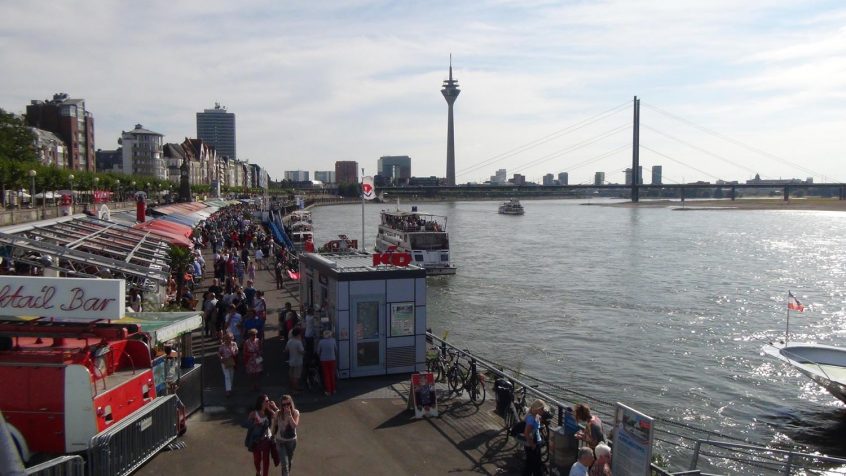 Time to go overseas again for family visits, more specifically this time for Marlies’s dad’s 95th birthday! We also want it to be a vacation. Last time we visited 3-4 people a day in both our home towns and more, this time we will visit several German friends and spend a week in Belgium with the family. No Netherlands (hardly)!!

We flew to Toronto where Jessie (former Regina resident) came to the airport to hang out with us, and Ivar popped by (a fellow immigrant we hadn’t met in real life yet). The Lufthansa plane to Düsseldorf was a different one than planned, and we got bumped up to business class… WOW!!!

Our friend Cora came to the Düsseldorf airport by bus to pick us up and we drove to Erkrath Rock City (our nickname for the small town) in our rental car, a pretty big Volkswagen Passat. After some catching up and a nap in her apartment , we had to take advantage of the nice weather and go to downtown Düsseldorf.

Düsseldorf – Panoramic Cruise on the Rhine

The old centre of a city is called an Altstadt in German. So we went to the Altstadt in Düsseldorf, starting with the Rhine Riverside Promenade. It is filled with patios and they were all occupied in this nice weather. There are several boat tours possible. I don’t think we’d been on a boat tour since Clear Lake, Manitoba. Cora took us on the Panoramic Cruise by Weisse Flotte with free beer! Of course I had to take the opportunity to enjoy a few Alt beers. This is the local specialty, a darker but not bitter beer, and my very favourite beer! And yeah you can image that Jetlag + Beer = 🙂
The tour lasted about an hour and we went south, to the Media Harbour near the Rhine Tower, and back north a bit, then back to the Promenade.

Afterwards we walked through the Altstadt, admired some old buildings like the old city hall and had a snack. There was a Dutch snackbar, so Nico had his first bami snack!

The next day it was raining and we visited the Neanderthal Museum in the gorgeous Neander Valley. This is the location where the first identified specimen of a prehistoric Neanderthal was discovered. It has some interesting exhibits and very real looking models of the homo neanderthalensis!
In the evening we had supper in a Greek restaurant.