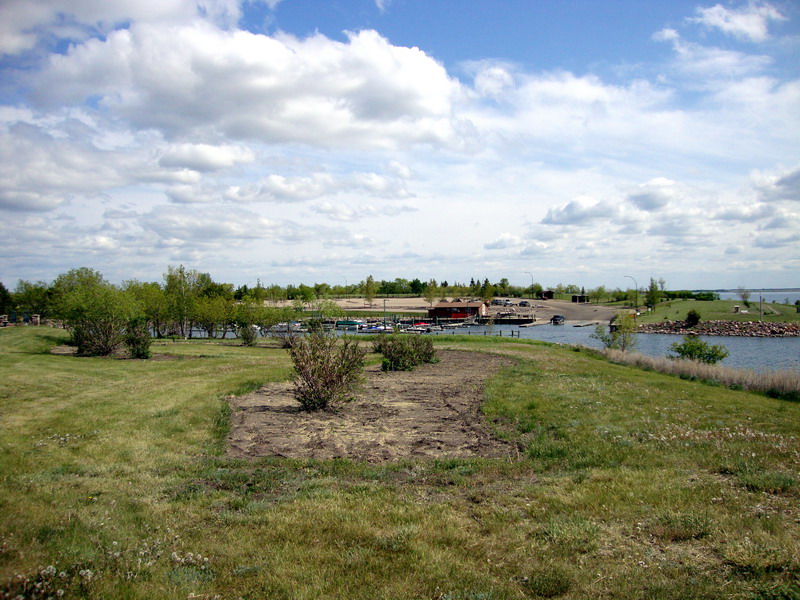 After a beautiful drive through the Qu’Appelle valley and up along the eastern shore of Last Mountain Lake (and having to stop for a passing porcupine) we arrived at the Rowan’s Ravine Provincial Park after 75 minutes. The hilly scenery along the way reminded us of the Dutch province Limburg where we used to live (although it’s rougher), but in the park itself it’s pretty flat. With its paved roads it’s great for biking around (we brought our bikes along this time), while there is a lot of grass and small trees. We got a very nice pull through site with a picnic table and firepit/bbq (there is a huuuuge pile of firewood on the campground you can help yourself to!), only 200m from the lake and maybe 300 to the beach, a bit further to a little (fast food) restaurant and I’m guessing 800m to the marina and its little store. 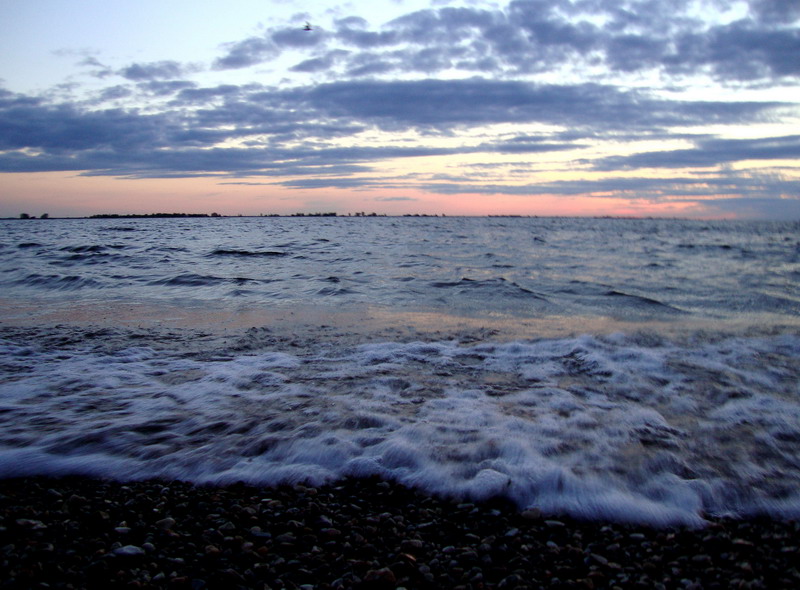 After we arrived on Thursday night, we visited the campground office with Gandalf, who curiously sniffed the stuffed coyote, badger and owl 😉 After we parked our motorhome on the beautiful and level paved pull through site, we biked around a bit, saw some deer crossing the street right in front of us and watched the sunset on the beach (ok we were just a little bit too late, but it was still very nice) where we saw a heron. We checked out the bathroom buildings and were pleasantly surprised. There is a small bathroom building close by which is already nice, but the pretty new service centre at the end of our loop tops it all! Immaculate and modern toilets and showers (I said I’ll never shower at home again!) as well as a laundry space! Back at the site we lit a fire in the firepit and sat outside with the cats for a while. 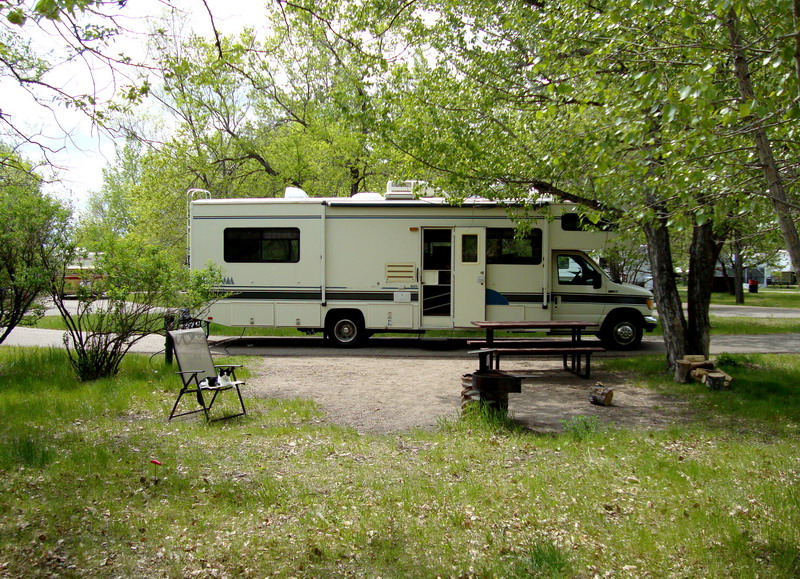 Friday was such a nice day. Maybe only 15°C, but mostly sunny and hardly any wind. We spent all day outside, from breakfast, to walking Gandalf, to biking across the campgrounds, the beach and around the marina, to having a coffee at the restaurant, to barbecueing for supper and roasting marshmallows in the fire pit at night. Only downside was that when Nico walked around with Gandalf, the cat panicked when they came close to the water and in his fear he bit Nico because he was holding him by the harness. It left a nasty cut that caused his thumb to swell and hurt quite a bit!

Unfortunately it was cloudy and colder on the Saturday and on top of it, it rained (light) most of the day. We spent most of the day inside, but at least Nico’s thumb was a bit less painful today, so it seemed he didn’t have to go to a doctor with it. Late in the afternoon we finally walked around in the light rain to get some fresh air and decided to have fish and chips at the diner instead of having to bbq. After that we walked around the campgrounds and again between 8 and 9, hoping we’d see the deer again, but no such luck.

Well maintained and well treed campgrounds in a flat area, on the eastern shore of Last Mountain Lake. The electric and non-electric sites have a picnic table and firepit/bbq (free firewood on the campground), $17-$26 (we had electric, pull through for $22), day/3 days/weekly/transferable annual Provincial Parks pass needed ($50 for 2009). Clean and modern washrooms and showers, playgrounds, close to beaches with restaurant, mini-golf, marina with store. No internet, but we did have cell reception from Rogers.