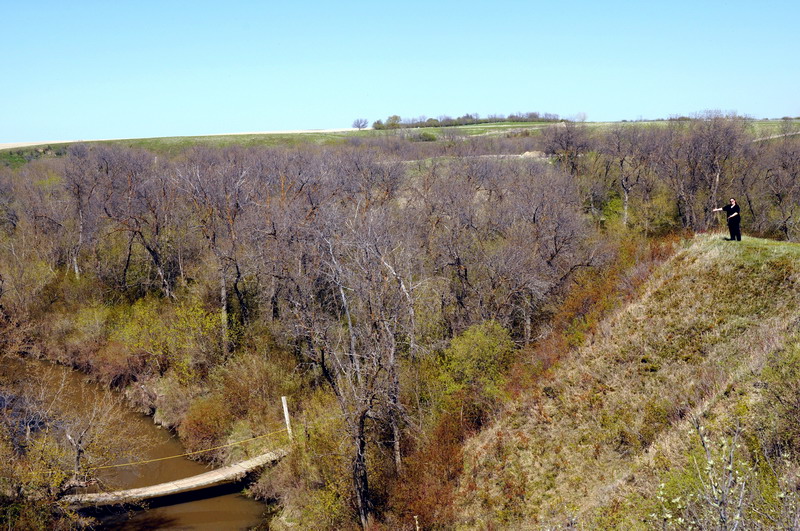 This trip was a typical weekend trip, from Friday noon until Sunday afternoon. We chose another regional park, this time even closer to home, Dunnet Regional Park near Avonlea, about 90 km SW of Regina. The park and campground are situated in the beautiful green and forested (with ash and maple trees) valley of the meandering Avonlea creek and close to the Avonlea dam that created Dunnet lake. 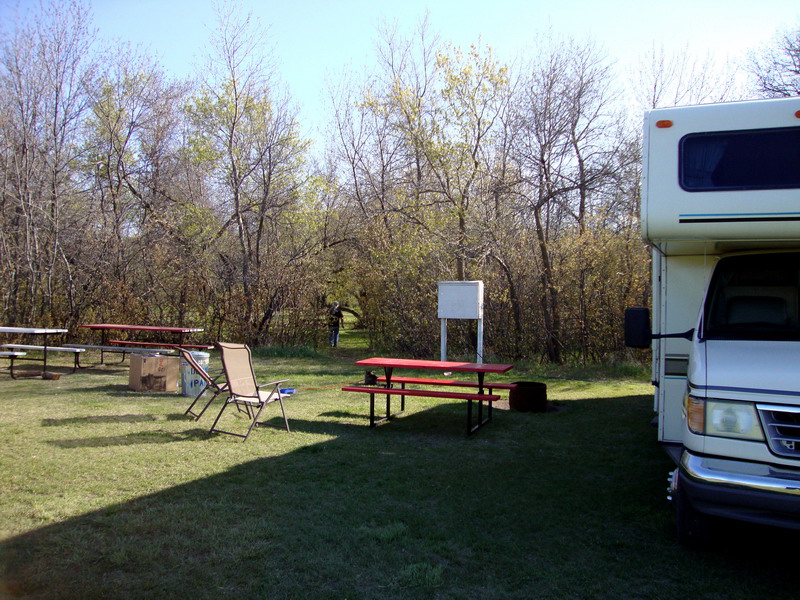 The scenery on the way over was fairly typical prairie stuff until we came close to Avonlea (and the 880m high Dirt Hills west of it). You drive through the valley by the golf course, then drive south through the little town of Avonlea (population 450) and back east to access the valley again by the lake and the regional park. The valley was starting to get greener, or at least the smaller bushes had quite some leaves, but the bigger trees not yet. Lots of green grass too, so all in all a huge difference with the (at that time still) barren campground by Manitou Beach two weeks ago. The lots of the campground are situated in that forested area of ash and maple trees, but unfortunately they are too small for bigger units and we got a spot in the office/pool/recreation area facing a ball diamond. At first I was disappointed about that (no other campers near to have some interaction with, open site instead of in the forest), but it turned out to be a quite good spot after all. It’ll probably be noisier later in the summer when the pool’s open, but now it was quiet, right behind us was a picnic area between the trees and by the Avonlea creek and the concession stand was close by for a snack, coffee or iced cappuccino. We had a simple outdoor (septic tank) toilet nearby, but on the last day we found flush toilets in the recreation building next to us 😉 Showers are probably only in the central building on the campground itself, but that was quite far from us (well, I’m guessing around 800m). 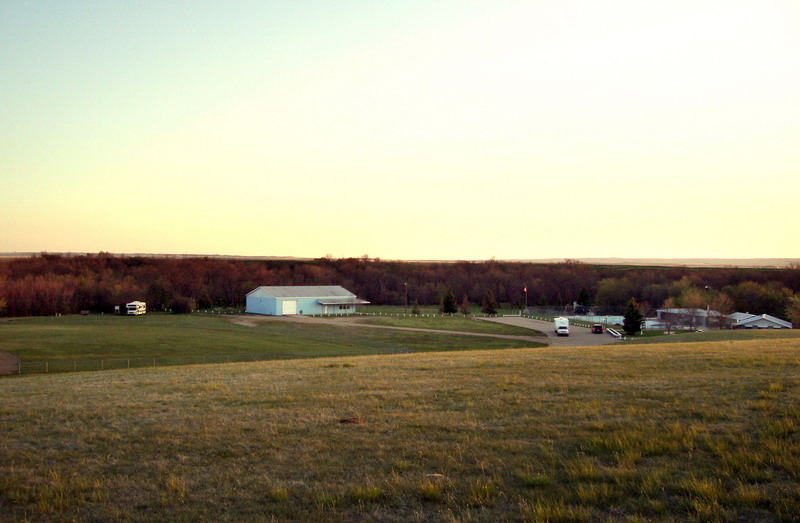 Friday was still a bit chilly and windy, but in the sun it was nice enough to stay outside all afternoon anyway. Nico assembled the propane barbecue we bought for the motorhome and we tested it. It’s a table model, but you can also extend the legs. Worked perfect!! After supper and close to sunset we walked to the actual campground just behind the hill we were looking at. What a gorgeous valley! Most of the electric sites (with and without other hookups) were seasonal, and there was a non serviced area even deeper in the woods. In the evening we watched a DVD inside (Nico had bought another 30 dollar player that plays PAL as well, for our European dvds and copies).

Saturday was just a gorgeous day. Probably around 22 degrees, and after breakfast (eggs, sausages and buns and Nico went to get coffee from the concession stand by the office) we had put the awning out and read and did sudoku puzzles in the shade. Awesome! The cats’  leashes were attached to the trashcan handles and we regularly had to set them free from their entanglements (or let them back inside every now and then when they wanted to). Nico took some walks with Tess and Gandalf. For the last walk he literally had to drag Gandalf back ‘home’, that was hilarious (see video)!! 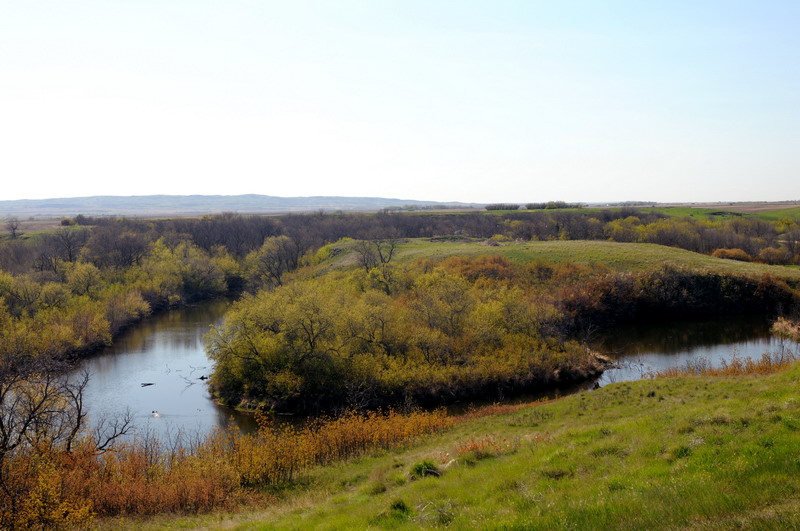 At the concession stand you can get coffee, pop, ice cream etc and lots of snacks, so for lunch we got some fries/poutine and ribs. A bit later we went for a walk to the lake. We took the ‘Nature Trail’ from the picnic area behind us, which started with a little suspension bridge over the creek. The trail was very narrow and sometimes so narrow, close to the creek and sloping, that I had to make steps sideways while holding on to branches to get passed them. Well, that was as adventurous as we get, pfff! After following the creek for a while we ended up by the dam and followed the regular road back to the campground 😉 After an iced cappuccino we went back to the motorhome where I felt something in my shirt. A tick! Oh yeah right… ticks! We had been walking through lots of bushes, so immediately I undressed, found 2 ticks in my shirt and one on the outside of my pants. Luckily nothing on my body. I think I checked everything 2 or 3 more times in the next hours. Brrr. We did get some mosquito bites despite the Off spray, but the bugs didn’t bother me too much anymore back at our site and a new layer of Off. We barbecued and sat outside until 9pm and watched a DVD inside until we went to bed at 11pm. What a perfect day (well except for the bugs)!

Last time we had checked, it was supposed to rain on Sunday, but we woke up to another sunny day. There were a few clouds and it was windy again, but still nice to have breakfast outside. Check out time was 12, so we got home fairly early (it’s only a 75 minutes drive). Backing into its new spot in the back yard went fine this time, as the entrance is clear and level and RV ready now! 🙂

The main campground has fairly small but gorgeous lots in the forested valley, for bigger units there are a few sites near the picnic area close to the recreation/pool/office area. All sites have firepits, thrash cans and picnic tables, water from central taps, $25-$30 (our site near the picnic area had 30 amp power for $25), day pass or seasonal Regional Parks pass needed ($35 for 2009), I think the modern washrooms/showers are free (most WCs are just the not-so-appealing basic septic tank type) but we weren’t in there, pool, concession stand, playground, baseball diamonds, fishing, boat launch, mini-golf, camp kitchen, group facilities, laundry, no internet. Golf course further north in the valley, it’s 7 km to the village of Avonlea (www.avonlea.com) with shops, grocer, restaurant etc.