We’re at the Dutch Lake Resort & RV Park in Clearwater, time for the 2nd update! 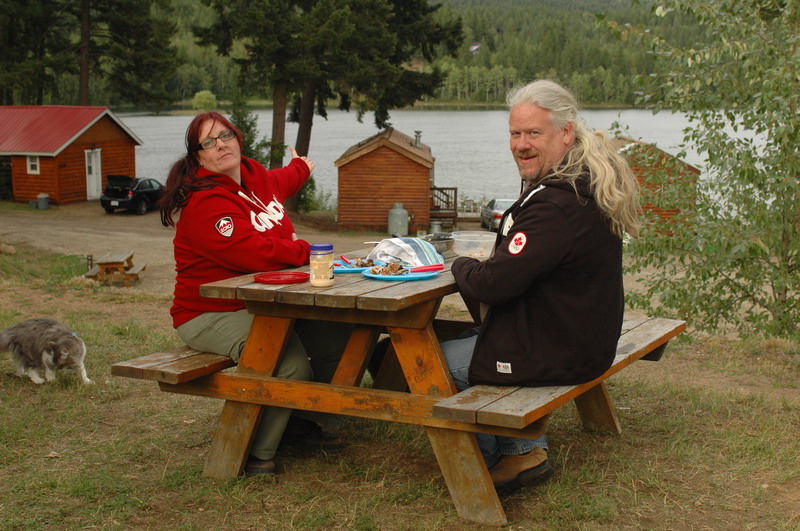 After making some sandwiches and coffee, we left lovely Revelstoke to go to Shuswap Lake (only 130 km). Although there’s a lot to see on that route, we didn’t stop in a lot of places. We drove through a beautiful, narrow valley past the huge Three Valley Gap resort with its bright red roofs, Griffin Lake, the Crazy Creek falls (had I known their suspension bridge could be seen from the road for a second, I would’ve taken a picture) and the Enchanted Forest. The weather was partly sunny in the beginning, but when we stopped at a colourful looking supermarket in Malakwa, rain showers had come in from over the mountain. All this time we’d been on the highway 1, the Trans Canada Highway, which at that point is just a fairly small 2 way lane (with some sections with passing lanes) where lots of (big) traffic is rushing through as if they were still on the huge 4 lane parts of the biggest highway of this country. Needless to say as a tourist you feel rushed having to speed past this gorgeous scenery and we were glad to have the opportunity to take a rural road (the Cambie Solsqua Rd) to Sicamous after Malakwa. 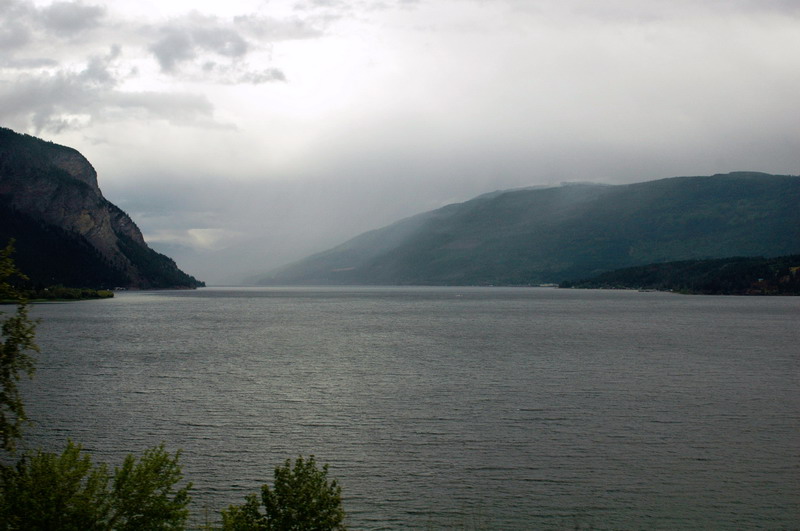 In Sicamous we forgot about wanting to see Mara Lake (we should’ve followed the Vernon sign for that) and missed the turn to go downtown, so before we knew it we were on our way to Salmon Arm and decided to go on and take a break there. In the meantime we had some great views (even with the rain) on the spectacular Shuswap Lake for the first time! In Salmon Arm it was sooo busy downtown (looks like everybody wanted to go shopping in this weather) that we couldn’t find a parking spot until we went down to the pier. In the rain and cold wind coming from the lake, we walked onto the pier for a few pics. Such a beautiful place, but we couldn’t fully enjoy it that way (despite my raincoat, I had to change into dry and warm clothes right away after in the RV). Like Revelstoke, we need to come back in good weather 😉 We continued on the hasty 1 until the exit to Herald Provincial Park. That road was small, windy and absolutely stunning (and it was dry for the time being)! After passing many cabins and the resort town of Sunnybrae, we arrived at the provincial park and our site (11) not far from the entrance. We wanted to explore the rest of the park but were so hungry that I first made some spaghetti and then we got so tired that we layed down for a nap first… to wake up after dark! That was the end of it…

In the morning we were eager to explore the park, so we walked down to the beach (woooow, the view!), followed the beach to the other side of the campground (jumping over the Reinecker creek), then back to the trail along

the creek to the Margaret Falls. The forest is pretty dense by the creek and the campsites in that area are gorgeous (ours is more shrubs and less trees). Once you leave the park, the trail enters a canyon, but the elevation gain is still not much, so it’s really easy for pretty much everybody! After only 500m in total you get to the falls. We didn’t expect much as the creek is just small, but the falls were actually very pretty!

Back at the campsite we relaxed for a while and later in the afternoon we took some chairs and our books to the beach, as it was the Shuswap Lake we came here for! That was absolutely fantastic, we just sat there and didn’t read, but kept taking in the awesome scenery! It was only 16C or so, but the sun came out quite a bit, so it was great. 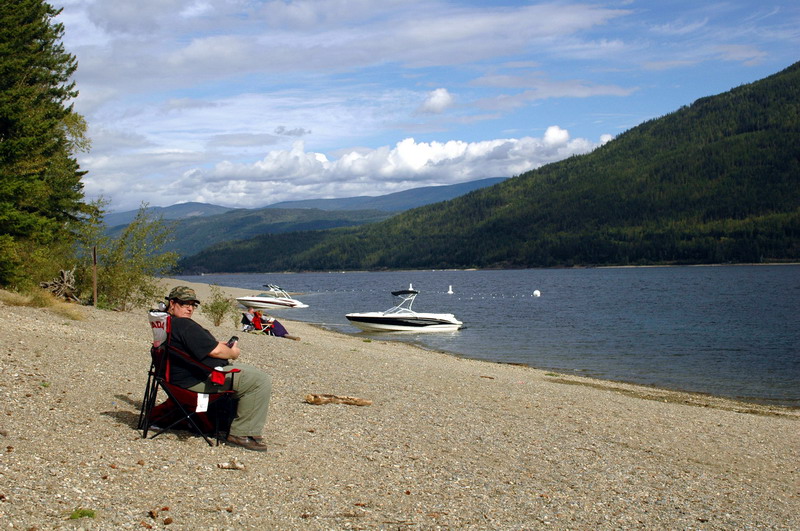 When we woke up we found out the house battery of our RV was already empty, probably because we had the furnace on (even though it didn’t start up often). We should’ve used the generator more often in the hours you’re allowed to, to recharge not only our electronics, but also the house battery. The BC provincial parks are beautiful, but we missed a power hook up. No recharging without the noisy generator, no watching ‘The Big Bang Theory’ in the evenings! 🙁 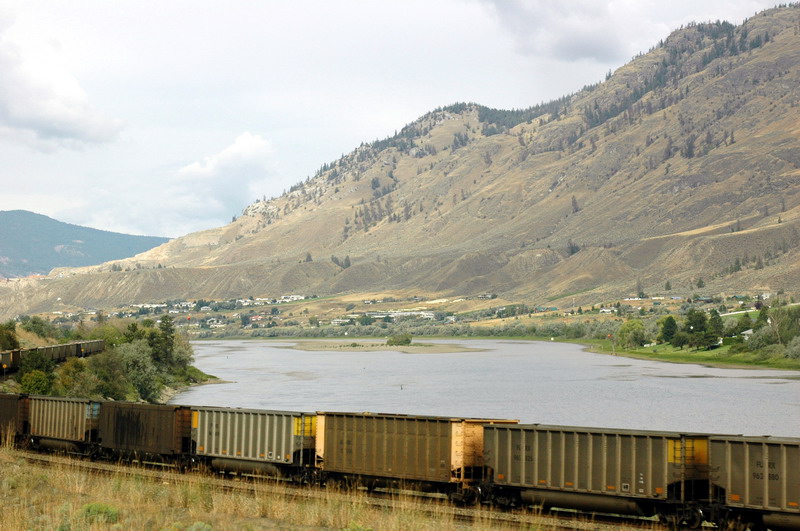 We left Herald early and had breakfast in Sorrento at Toby’s Coffee House, which turned out to be a great choice! We continued on the 1 to Kamloops and past Chase the landscape changed dramatically. The hills were bare and dry, more desert like. In Kamloops we took the 5 north and soon we got into a more forested landscape again. As the 5 is still a pretty busy highway, we decided to leave it for a bit and in Little Ford we took the 24 to Bridge Lake, drove around the lake and back to the 5 (after having an expensive cappuccino at a motel in a log house on Lac de Roches, but we had a very nice chat with the Italian lady there and the setting was beautiful). In Clearwater we found the Dutch Lake Resort & RV Park and Nico thinks it’s the prettiest he’s seen so far this trip, because of the view on the little lake! And they have wifi… so it’s time for this update! 🙂