RIP Melissa
Our hearts broke when we learned of our friend Barbara’s daughter Melissa’s unexpected passing at age 23 of a lung embolism. No one should ever have to deal with something like this, but Bar least of all. She just had a hard year after getting a new kidney, lost her dad and just when she was excited to start a new year (“it’s like a fresh set of sheets on your bed, wonderful!”) this happens… hang in there Bar, we love you and you’re in our thoughts! *hugs*

Request for medical received!!!
We also have good news: 4.5 months after we sent our paperwork to Buffalo NY, we received the request to have a medical! This means everything else was fine and it’s the last step in getting the permanent visa! We made an appointment for February 8th!

Houseguests
Our house has gotten a bit livelier with 2 houseguests, one human and one feline. The human one is called Mark, he’s also a Dutch immigrant who lived in Lloydminster, but has been transfered to Regina. While his house in Lloyd is still for sale, he used to stay at a co-worker’s place and after that guy moved to Alberta, Mark came to stay with us. We already loved his company and knew it would work well. Soon we found out the old guestroom gets pretty cold in the winter, so we swapped rooms with our ‘office’ room and that worked out well for both 🙂 Our feline houseguest is a friend’s 5 month old kitty that we’re babysitting for a few weeks. Smokey’s a sweethearts and it’s going well with our own cats too 🙂

And just a little bonus photo of sundogs… it’s not a glare in the camera lens, the spots around the sun (‘extra’ suns) are called sundogs. There was even a bit of a second ring, we saw a rainbow like part close to the ground. Beautiful winter phenomenon. 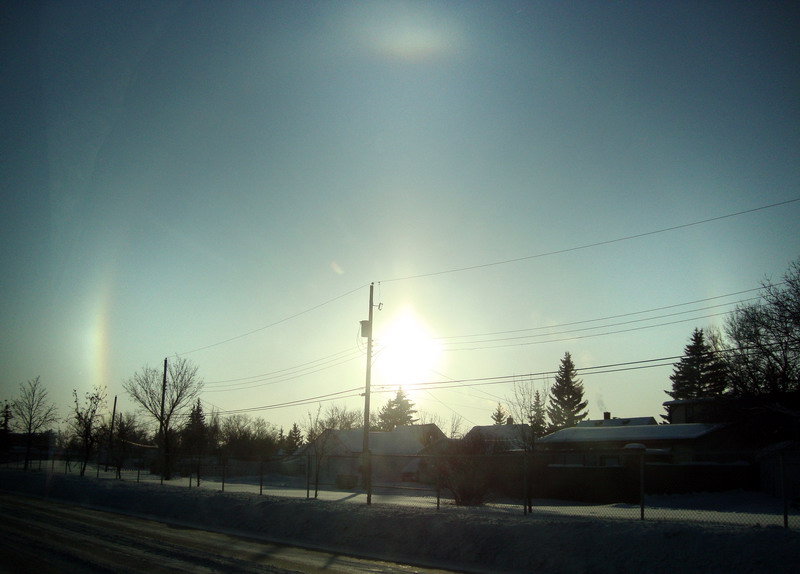