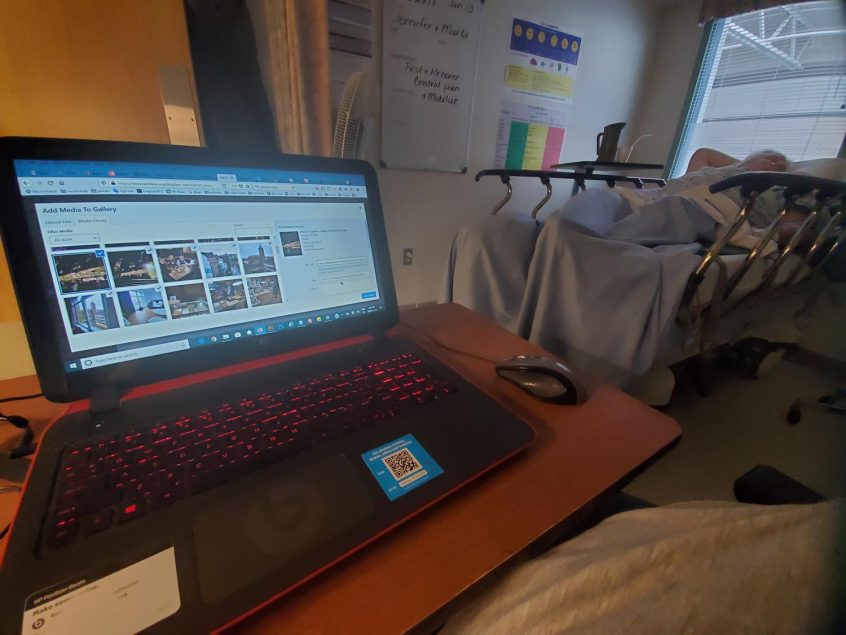 Yesterday it had been one month since my Valentine, I mean Nico, had hip replacement surgery. He’s improving nicely, but it sure is a long process!

They used the anterior approach. That means they operated from the front. They don’t have to cut muscles for that, so the healing process is quicker. There is also less chance of dislocation right after the surgery, which means that there are no restrictions either! But of course you still have to be careful!

The next day he was already released from the hospital. Yes, that quick! They check if everything is how it’s supposed to be, that you have your prescriptions for pain medication and bloodthinners and off you go! Well, that was quite heavy. Of course it hurt a bit to get in and out of the car, but he was able to walk to the house with the walker (and a crutch for steps).

He spent a fair amount of time in bed still, of course, but with a bad back, it was impossible to just sit up and get out of bed! We figured out that the way to do it was by rolling on the side first and then letting the legs slide over the edge. That way I could help pull him up.

That was definitely something I wasn’t prepared for. I mean, of course I didn’t mind helping with everything, but I didn’t realize how immobilized exactly he would be in the first week. We propped up a straight camping chair with an firm pillow to have a higher seat to sit on. In the first days he could only sit for an hour or so at a time, so he still spent a good deal of time in bed. He did his best with the gentle exercises he was given and even though he needed strong painkillers, he did see a little bit of improvement every day in his movements. And the operated area started to look better too. He had been pretty bruised and swollen!

I have wondered whether they should’ve replaced his bandage in the hospital still. They prefer to leave it on if possible, until you get the staples out after two weeks. But it was already pretty saturated when he left the hospital. After two days it was about to leak and I was too scared to take the bandage off! Well, we weren’t going to call for help, so the next day I pulled up my big girl panties and did the job. Nico gave instructions and it wasn’t scary at all. The “zipper” itself looked clean and nice! It was already almost dry! I carefully cleaned around it and put a new bandage on. Phew!

After the first hard week

In the second week he started to get less depending on me, he was able to get out of bed himself and do more things by himself. After two weeks the staples came out and it all looked good. They put a different bandage back on, one that would let the wound breath, but after his first shower two days later, he didn’t have to put anything back on anymore. Sweet!

By now he switched from walking with a walker to using a crutch. He had two physio appointments so far and things are apparently going well for this hip replacement surgery. Walking little bits in the house without any support is now allowed. He overdid it a bit at the last appointment though, so that means a bit more rest the next day. They want you to move around as much as tolerated and do some gentle exercises. But they also warn you not to overdo it and listen to your body! He’s been back a few times to the regular doctor for more pain medication, but he’s off the opioids by now and back to his usual Arthrotec (for arthritis). Good!

Back to the surgeon soon

In two weeks he’ll see the surgeon, dr. Alshrif, again, I’ll be curious to see how good he thinks things are going and what the next instructions will be. He is currently not allowed to drive, which also means I can’t drive him around on my learner’s permit. He’ll have to be able to take over if needed. So we made sure our fridge, pantry and freezer were well stocked before the operation and we have to ask friends to help get us to appointments. We are super grateful to Kristin and to Henk for all their rides so far! THANK YOU!!

2 Comments on “My bionic Valentine ♥”