You’ve been able to follow us on our website. If you read the last entries you have also seen how impressed we were by the space, the mentality of the people and the quality of life in general there. We came back as changed people. Or rather…. with the realization how crowded, rude, intolerant and hectic we’ve become in Europe (or at least our part). We felt so at home and at ease in Canada, that we are looking into emigrating there! Final decision will be made after we’ve learned more about our job options there. Nico would be the applicant, and ‘everyone’ says there is a shortage of nurses, so not to worry. Sounds good! But we’re trying to get more info on that from more official sources. 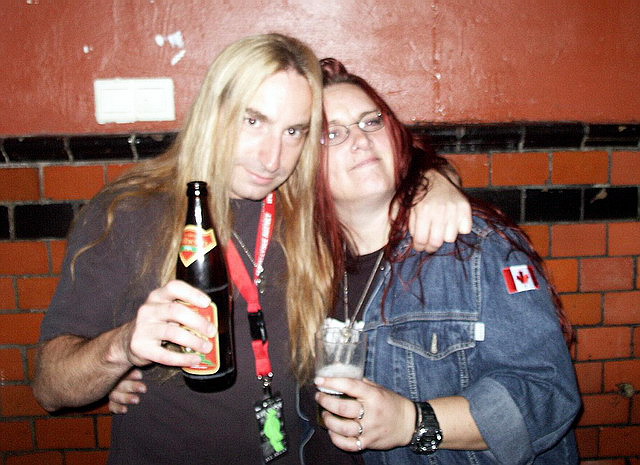 On the 10th we saw Tim for the last time this year, just days after we got back, Into Eternity traveled to Europe as well for ProgPower and a tour with Kataklysm (+ Graveworm, Mystic Circle). We went to see them in Essen with Cora. We met someone Cora knows (Michael), someone from the IE forum (Stefan/Painkiller) and Christian and his friends. During the soundcheck I filmed a little a cappella thingie (“lick meinen Sack…” LOL!!) with our small photo camera and during the Graveworm show an a cappella happy birthday wish by our boys to Graveworm’s keyboard player Sabina, but when the camera was finally ready to film it was already almost over 🙁