Even though it went better than expected with my back at first when Marlin was here, I did get a lot more pain the next week. Guess it was too much after all? I finally went back to the doc and after examination he said my spine and pelvis aren’t straight, and sent me to Cesar therapy where I’ll learn (with exercises) how to get the position right and how to avoid problems with muscles and joints. I already started and got some light exercises, I guess I’ll be getting more and more after each consult. It’ll be good that I was able to go there before the vacation so it’s no lost time now I know what exercises to do.

Cora gave us a good scare in the same week. Sudden pain in her back, emergency post diagnosed a herniated disk. When she went back later to the neurologist because she also had one eyelid hanging, all alarm bells started ringing there! They suspected a syndrome that often 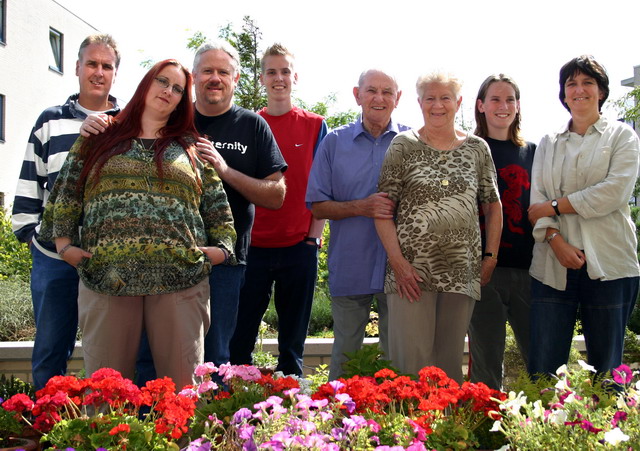 has tumors in the lungs as a cause, so she went into hospital for a few days that same week. Man, I’ve been scared! A
blood cloth was also an option. Even though she still needs to have a few tests done early September, they are pretty certain that the syndrome was “just” caused by that herniated disk, phew!!!
We went to visit her last Saturday which was fun, went to eat at a Greek “imbiss” (fast food place). We stayed the night and went to my dad‘s the next morning. He had his 87th birthday earlier in the week and my brother and his family were also there. We took some pics with the whole family, that was fun!!!

So now our focus is back on our vacation to Kalives, Crete (Greece) again…. 6 more days wooohoooo!!!!! We leave early Monday morning and come back on the 26th in the afternoon.

◀in the Eifel with Marlin
Crete, here we come again!▶